Helena Wright is a PhD Researcher at the Centre for Environmental Policy, Imperial College London, researching climate finance and food security in Bangladesh.

Along with a delegation from Imperial College, I attended the UN talks on Climate Change last week in Doha. This was the 18th Conference of the Parties (COP-18) to the UNFCCC, which means there have been 18 years of talks. Although the negotiations were slow and fraught with political wrangling, there was some ‘modest progress’ as countries agreed to extend the Kyoto Protocol, covering around 15% of global emissions, and discussed the loss and damage due to climate change.

Climate Action Tracker has calculated that current pledges mean the world is headed towards a worrying 3.3 degrees of global warming. At Durban last year, countries agreed to form a binding agreement by 2015. However, it is clear that time is running out to keep global temperature rise below 2 degrees and avoid overstepping ‘tipping points’ in the climate system. Many small island states, who are particularly vulnerable to rising sea levels, want the temperature rise to be limited to 1.5°C. 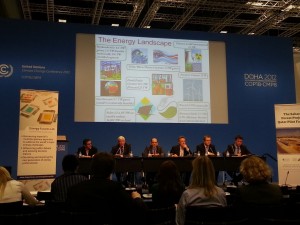 At the heart of the political gridlock, various countries have put weak pledges on the table for reducing greenhouse gas emissions. The EU has pledged a 20% reduction, with conditions on increasing this target to 30% by 2020. This appears weak when one considers historical responsibility for emissions and the fact the EU has almost already achieved this target (partly due to the recession), meaning the EU’s aim is to do little until 2020.

The issue of equity and responsibility was another tense issue. The United States resisted including the principle of “common but differentiated responsibility” in the text and instead countries have looked to emerging economies, where emissions are rising fast, to implement mitigating action. This risks becoming an excuse for inaction. Countries with the highest emissions per capita are primarily countries with fossil fuel resources or historical emitters, although emissions in emerging markets like China are rising rapidly. These issues are likely to remain contentious.

In my view, it would be helpful if countries would move beyond the current paradigm of seeing action on climate change as ‘costly’, and instead start to reap the economic benefits of efficiency and renewable energy. Business leaders have already highlighted willingness to get behind government on sustainability if the right framework is in place for green growth.

Climate finance also remained a contentious issue, as many countries struggle with domestic budgetary issues and global economic crisis. Countries have set up the Green Climate Fund (GCF) to scale up public and private finance to $100 billion by 2020. While there were some key pledges on finance made in Doha, in the final session Pa Ousman (head of the Least Developed Countries group) highlighted the shortage of funding between 2013 and 2020 to help the poorest countries tackle climate change. 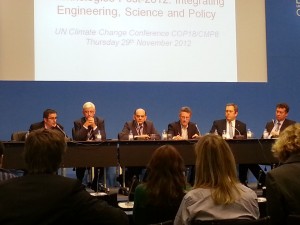 Recession has been given as a reason for inability to commit to climate finance, but there are concerns the current triple food, fuel and financial crises may only be a taste of losses to come if climate change is not tackled. Emissions may increase rapidly after the recession unless economic growth is ‘decoupled’ from emissions. Extreme weather events are already affecting global economies, though experts from the Grantham Institute have noted it is too soon to say definitively whether the collection of recent extreme events is linked to global climate change.

The emerging issue of ‘loss and damage’ highlights the dangers ahead if countries do not reduce (mitigate) emissions and cannot adapt. Losses may stack up if progress remains slow or if countries do not meet their targets, and polluters may be confronted with legal claims for compensation. The World Bank recently reported the world is on a devastating path to a 4 degrees warmer world, with extreme heat-waves, falling food production and flooding of coastal cities.

Solutions Presented at Imperial’s Side Event

On Thursday November 29th, Imperial College hosted a Side Event at the UNFCCC conference on the topic of “Innovating Climate Mitigation Technologies Post-2012: Integrating Engineering, Science and Policy”. The event discussed the range of technical options available for mitigating climate change whilst providing energy security and economic growth. Professor Michael Grubb, visiting Professor at the Centre for Environmental Policy, spoke about the challenges in innovating clean technologies, including the “valley of death” that often occurs between technology development and commercialisation. Professor Maitland spotlighted some cutting-edge innovations including solar power and energy storage, while Tim Dixon from the Department of Energy and Climate Change spoke about the UK Government’s experience. In the exhibition centre, members of Imperial College also showcased their CCS (Carbon Capture and Storage) research.

I felt the event highlighted that mitigation of climate change was technically possible and that economically and technically viable solutions are already being implemented. However, the slow progress at the Doha conference indicated that the politics of achieving such a shift in economic systems is difficult. It is up to policy-makers to provide the framework, highlighting the key importance of environmental policy.