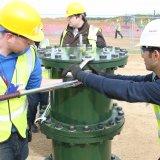 For old-time teachers on Constructionarium, it is sometimes hard to remember that, whilst you have seen a structure built multiple times, your current students have not. Reminding ourselves of this simple truth, the achievements of the students become much greater.

Yes, there has been concern over the inability of some teams (or team managers) to act upon advice.

Yes, there is some concern about teams where they just havent registered how little time they have left for physically attaching hundreds of bits to hundreds of other bits (the latticework of struts between the timber ribs that spring from the steel cleats on the concrete columns rising from the ring-beam of the weather canopy for Naples Airport Tube Station Entrance springs to mind).

But there is some sheer poetry in the finesse that some teams have brought to their projects. One group is so far ahead that they left site in order to save labour costs and rented out some of their workers to other needy teams. They estimate a saving of £66k, which is worthwhile by anyone’s standards, even if the money on these projects is notional.

The Kingsgate team had time to spare today, so they decided to have fun and run a nuclear protest over at the Bircham B nuclear island power station project. They staged a demonstration outside the security fence that makes the nuclear group a site within a site. But the nuclear group took a strong approach: a bucket of water did seem to douse the flames of the protesters’ pseudo anger. The protest was environmental because some polystyrene from the formwork for the domed roof of the nuclear island had found its way into the Kingsgate river system. This breach of construction waste control provoked the protest.

Retaliation may or may not have occurred: the Kingsgate team left site and repaired to their accommodation for a rest before dinner. This is unheard of in the lore of Constructionarium, but cannot be faulted on engineering grounds. Watching concrete cure is not something that a team need do. They cleaned up their site and their portacabin, to get ahead for final day. Jawdroppingly mature management from an undergraduate team. 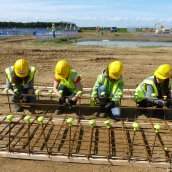 Fortunately, some of the other teams are conforming to more normal patterns of progress. The Don Valley team impresses with their ability to “see one, do one” and they seem to have good time control and an ability to deploy human resources (or “use workers wisely”, in the language of normal people).

The Nuclear Project team featured on BBC Radio and BBC Norfolk’s “Look East” news programme, which is great fun. But getting filmed is something that does not mesh well with staying on programme and making good use of workers.  The VIP’s, however, have been making contact with staff and showing immense enthusiasm. It is good news and great credit to all the teams for being able to cope with visitors whilst juggling time, cost, quality and maintaining safety on their projects.

The Gherkin tower begins to rise, so we hope for a happy sunny photo with everyone on it on Friday.  Some might view the Gherkin tower as a giant 3-D jigsaw puzzle, which misses the point that it happens in 4-D with a race against time. That time creates pressure but the students will cope.

And one student, when asked what he thought of constructionarium, said “We should do this every six months: it would make such a difference.” That is a thought, for the organisers, both heartening (for the educational endorsement) and frightening (for the logistical effort it would entail).