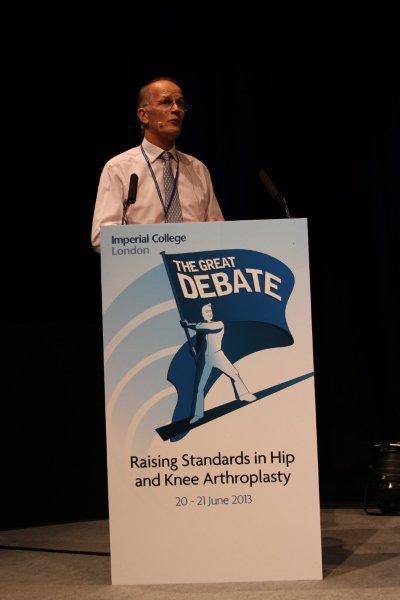 On the 20th and 21st June, the MSk Lab ran the Great Debate for the second time after taking the gauntlet on from industry who had organised it in previous years. Professor Cobb is one of the founders of the meeting 7 years ago and chaired the event since its inception – so last year it was great to finally bring it in house.

The Great Debate is a two day interactive conference which gives the attendees opportunities to vote on topical issues in hip and knee arthroplasty, as well as question the faculty on controversial themes in the session debates. Last year the time of year it was held changed as well as a move of venue to The Mermaid Conference Centre. 2013 also brought some changes – the avatar/logo was given a new lease of life and breakout sessions run by industry were added each day. We had the support of 19 Industry sponsors, a 25 strong international faculty with renowned speakers joining us from; Australia, USA, Germany, Italy and the UK.

“The big issues debated this year included hip bearings, and partial knee replacements competing with top of the range total knees. In the hip bearing debate, ceramics were clear winners, although interestingly resurfacing is not dead. Almost 80% of the surgeons thought there was still a place for the procedure, and accepted the functional gains that it brought.

In the knee debate, huge interest was found in the compartmental knee approach, with most speakers expressing dissatisfaction at the joint registry and its inability to report poorly functioning but unrevised total knees”

Having almost finished dotting all the t’s and crossing all the I’s to finalise this year’s event, we may just have time for a cuppa before starting to plan The Great Debate 2014. With such good feedback – how could we not!

“I have attended three times since 2006, I think this is the best joint arthroplasty meeting in the UK”

Tweet us or follow us @Great_Debate_UK, which we will be using to try and keep some debate going, accept suggestions as to topics for discussion, and provide details of who to expect to see, where and when in 2014.