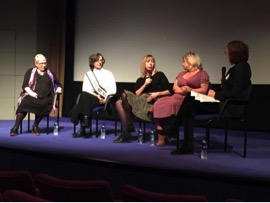 It was an evening designed to inspire. This was a chance to celebrate the first five years of the CSC’s Suffrage Science scheme, which aims to encourage women into science, and to stay there. With Helen Pankhurst involved, it was also a chance to explore the role of activism today, and the changing nature of women’s activism since her great grandmother’s time as a Suffragette.

The evening, hosted by the Tricycle theatre in North London, began with a screening of Suffragette the film – to remember those who gave the Suffrage Science scheme its name. The film features Carey Mulligan, Helena Bonham Carter, Meryl Streep and others in a frank portrayal of the fight for Votes for Women. It was an uncomfortable watch. Historical details, such as the Cat and Mouse Act, rendered so much more powerful when portrayed in unflinching detail on the big screen.

Before the film head of Communications and Public Engagement at the CSC Susan Watts, sat down with Helen, and talked about how her famous Pankhurst predecessors might view today’s activists; about who inspires her and about whether she sees signs of activism in science and medicine today.

“I think the whole of science is about activism. It’s about looking at a particular discipline and pushing the boundaries of what that discipline can deliver – and often it’s about the relationship between science and humanity and what science can do in terms of changing the world that we humans live in. So to the extent that it enables society to benefit in a hundred ways, that is activism.

Read the full write up and watch the interview.

A study in Nature Cell Biology shows that we do not yet have the whole story about how fertilised eggs produce the many different types of cell that make up our adult bodies. It is widely accepted that an enzyme called Tet plays an important role, but something else seems to be at play, according to the study.

Scientists including the CSC’s James Ware have found that women who suffer unexplained heart failure towards the ends of pregnancy or shortly after giving birth share certain genetic changes. The finding provides some explanation for this mysterious condition, and suggests that by testing relatives, other women who carry the same genes, and who might face similar risks, could be identified early. They could then be monitored closely and treated more swiftly if needed. In the future preventative treatment might be developed too.

And a study published in Nature Communications is the first to show that an enzyme crucial to keeping our immune system healthy “surfs” along the strands of DNA inside our cells.