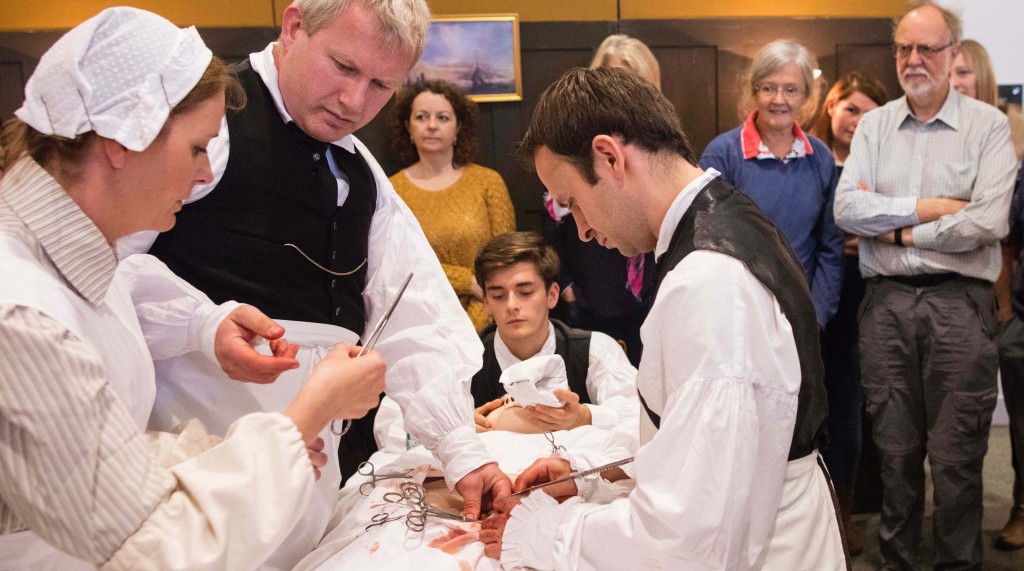 Imperial College’s Centre for Engagement and Simulation Science (ICCESS) took their ‘Time-Travelling Operating Theatre’ project on the road in September and October 2015 to great acclaim. The project, funded by the Wellcome Trust, featured real clinicians working together in re-enactments of three eras of surgical history – 1884, 1984 and 2014. Members of the public were taken on a time-travelling journey through each era to see how technological, cultural, environmental and social changes have influenced the development of surgery.

Led by Sharon-Marie Weldon, the ICCESS team delivered the events at a number of prestigious venues; the Science Museum and Royal College of Nursing in London, the Thackray Medical Museum in Leeds and finally the National Museum of Scotland in Edinburgh. The events were very popular with the public and attracted a diverse audience.

The key aim of the project went beyond the delivery of the events, however. Research has shown that it is very difficult to engage the general public in debate that can shape healthcare policy. Each Time-Travelling Operating Theatre event was followed by a discussion amongst audience members, clinicians and others such as ethicists and medical defence lawyers.   Some really interesting perspectives emerged from these discussions that covered a wide range of issues, from the ethics of modern medical procedures through to the environmental impact of the present-day healthcare system. Sharon-Marie is currently analysing the data that was captured from these discussions and will be producing a paper that examines whether hands-on engagement activities such as this represent the future of ensuring public involvement in shaping the future of healthcare.