Geometry, Action, and Souvenirs of Insurgent Discourse by Alexander Apóstol

A new series of works by Alexander Apóstol, explores the concept of political art as defined by David Alfaro Siqueiros

Geometry, Action, and Souvenirs of Insurgent Discourse, a new series of works by Alexander Apóstol, explores the concept of political art as defined by David Alfaro Siqueiros in four crucial texts: the “Manifesto of the Technical Workers, Painters and Sculptors Union” (1924), “Towards a Technical Revolution in Painting” (1932); “For such a Generator, such Voltage” (1933); and “In War, Art of War” (1943). Apóstol’s strategy was to develop a collaborative work that would underscore the idea of “productivity,” a practice that parallels the modern political ideas of the Mexican muralist.

Apóstol creates a relational chain between action and thought by connecting each fundamental principle to a leading figure of Western thought whose theories rest on equally complex codes. Guido de Arezzo, the Italian monk who invented tetragram music and assigned the syllables Do-Re-Mi-Fa-Sol-La-Si to the musical scale, informed Apóstol’s conceptual understanding of Faith. Mathematician Kurt Gödel, whose ideas lay behind Alan Turing’s Enigma machine –which deciphered Nazi codes during World War II– provides the connection to Politics. French scholar Joseph Fourier, who invented a theory to explain the spread of heat waves during the Napoleonic invasion of Egypt, is identified with Science. Finally, Economy is embodied in the work of Joseph Marie Jacquard, the French merchant who invented punch cards for automated fabric production, and is thus today considered  the father of the modern computer.

Once Siqueiros’ four manifestos were mathematically codified, Apóstol created a collaborative network addressing four aspects of artistic creation: drawing, dance, music, and documentation. The production processes, in part, resemble Siqueiros’s emphasis on reproducibility, but they are also transgressive, questioning the Mexican painter’s understanding of the masses, and his constitution of the political, as enunciated in his manifestos. In other words, Apóstol wanted to complicate the modern idea of the political artist: rather than strategies imposed by a single heroic figure, we find here strategies enacted by an interdisciplinary field of actors, professionals or not. The process used rather straightforward processes to reinforce the ontological status of the work of art and to subvert two strategies fundamental to Mexican muralism: the tight relation between Science and Art, as well as their social character.

For one part of his project, Apóstol asked nineteen students from a technical school (CETIS No. 2 “David Alfaro Siqueiros”) to create 1,400 technical drawings on graph paper. The geometric variations between the drawings and their reproducibility reveal the basic connections between imitations and mathematics; the numbers that led to the technical drawings can also lead back to the original texts. Apóstol then created four murals whose geometric compositions echo Siqueiros’s late murals, as well as emblematic images of Venezuelan modernism, including works by Jesús Soto, Carlos Cruz-Diez, Gego, and Alejandro Otero.

To connect Siqueiros’s manifestos to dance, Apóstol’s strategy consisted of working with the concept of “geometric transfers.” Here, the artist shifted the discipline’s classic movements to the background, prioritizing instead what his collaborators called a “choreographic vocabulary.” This was really a transgression of dance itself, designed to bring attention back to the manifestos and their codes, as well as the fundamental principles of Politics, Science, Faith and Economy.

These same principles were assimilated differently by the composers that Apóstol selected. For the musicians, the translation exercise was less categorical: they fully escaped the limits imposed by Siqueiros’s ideological narratives, asserting authorship for their music in ways that complicated Apóstol’s ideas about the creative process. If mathematical formulas at first allowed the artist to establish precise limits, the process revealed–in the case of the musicians–that collaborative works can overwhelm orthodox Conceptualist strategies. Instead, four personal works were generated: a string quartet, a brass quintet, a percussion ensemble with voice, and a solo piece for cello. 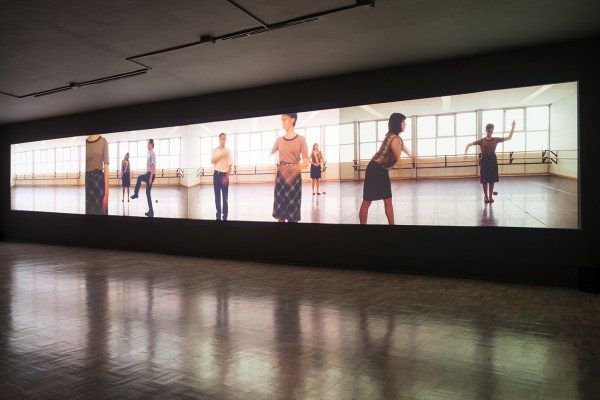 After exploring drawing, dance, and music, Apóstol returned to his original proposal, and designed four display cases that provide a documentary reading of the personal and collaborative processes behind the work. The cases break the linear narrative here described, instead forging a personal narrative that intertwines—in overlapping timeframes—the various processes that took place over four months of artistic production. Here we find fragments, traces, and records from work sessions which, combined with historical documents Apóstol found in the archive of the Sala de Arte Público Siqueiros, complete the body of work produced for this exhibition. 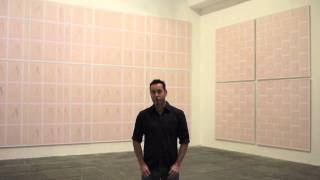 Read A new series of works by Alexander Apóstol, explores the concept of political art as defined by David Alfaro Siqueiros in full

About Geometry, Action, and Souvenirs of Insurgent Discourse by Alexander Apóstol