Few things are more effective in motivating PhD students and researchers to take a break from their ‘Nobel Prize-winning’ research than pizza, drinks and the promise of an interesting
talk.

The Bioengineering PhD student representatives organised a talk on data ethics on Friday 9th of March. The topic was widely popular and the event was well-attended. There were some lively discussions over pizza and drinks in room 301.C at the Royal School of Mines Building. 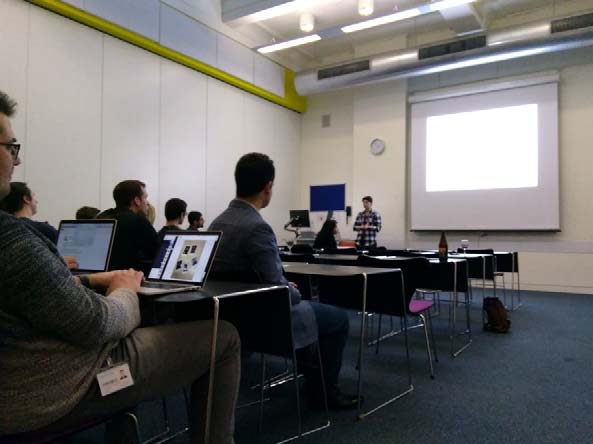 People mingled before the start of the talk, to get the food distraction out of the way, then Dr. Stefania Garasto started her talk titled “Data and algorithms: good or bad? Spoiler
alert: It is more complicated than that.”

She posed the question on whether data science is intrinsically ethically good and her presentation went on to show that algorithms are not ethically neutral because the values
and biases of their designers are reflected in the code. For example, Google shows high-paying job ads preferentially to men and ads with the word “arrest” are more likely to
appear when searching black-sounding names.

There are ethical concerns for current data practices. These practices beg such questions as: Do people have real control over their data? How can bias in the data be corrected? Who is responsible for the ethical failure of an algorithm? And these questions are hard to answer.

Stef presented the controversy over a Facebook case study wherein Facebook manipulated its users’ emotions without their knowledge by influencing their news feeds.
Many in the audience had not heard of this case and no one supported the ethics of this practice. 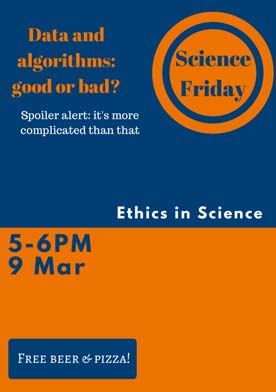 Stef went on to discuss how ethical data practices might be ensured. One is by law, for example, the GDPR principles. However, people pointed out that this could be restrictive
in data mining and that it might not cover everything, and it would at least be valid for everyone. Another option is to develop a sort of data code of conduct. Yet it was also
argued that this would be hard to enforce and this may vary from one organization to another.

Discussion continued with more pizza and drinks, and people shared with one another whether they were on social media or not and what their privacy settings were.

This event provided a good opportunity for the research students to get to know one another. There was good feedback from both students and other researcher guests about how the talk was a
good reminder to be vigilant about exercising control over our data.

We want to thank the Graduate School for funding this event and helping Bioengineering become a friendly research community.