by David Ho, PhD Student in the Department of Physics

A really strong magnet can dissolve Everything

One wrong thing everyone knows about the universe is “conservation of matter”. It seems obvious: if you have a chair, you can move it, or turn it around, and you still have one chair. If these were the only experiments you did, you might proclaim that the number of chairs in the universe always stays the same.

Of course, it doesn’t take much thought to counter this: with a hammer you can easily change the number of chairs in the universe. But if you collect every splinter of leftover wood, you’ll find the same amount before and after the destruction. Is wood conserved? Of course not; just light a match. But if you count all the atoms…

This example could continue for a while. The main theme is that certain things appear to be conserved, but if you put in enough energy you can break apart the original unit and find a smaller one. The natural question, then, is where does this end? To current physicists’ best knowledge, there are two endpoints to the chain of reduction: all matter is made up of baryons and/or leptons.

The baryons that most people are familiar with are protons and neutrons(1). The most familiar leptons are electrons (less familiar are neutrinos, muons and tauons). Every interaction ever observed conserves baryon and lepton number(2): you can change neutrons into protons, or neutrinos into electrons, but we have never seen a proton become an electron.

Baryon and lepton conservation seems, experimentally, to be unavoidable. But theoretical physicists have found a loophole: a process known as the sphaleron can transform baryons into leptons and vice versa. This is a type of quantum tunnelling: the strange rules of quantum mechanics allow a baryon to pop out of existence and a lepton to take its place. Like nuclear fusion in the lab, sphaleron processes are possible but haven’t been achieved yet. This is because they are phenomenally unlikely: the chance of seeing one is about one in 10160, so small lightning-striking-lottery-ticket analogies aren’t worth the effort.

It turns out, however, that a magnetic field can help this process. In fact, a strong enough magnet would make sphalerons so likely that anything in the magnet’s field would have its baryons converted to leptons, and the object would dissolve. My recent research has been to calculate exactly how strong this is, and we’ve confirmed a long-held suspicion that it’s around 1020 Tesla. Unfortunately (or perhaps thankfully), our strongest permanent magnets are only about 10 T. My funding doesn’t extend to death-ray development, but perhaps one day supervillains will thank 21st Century theorists. 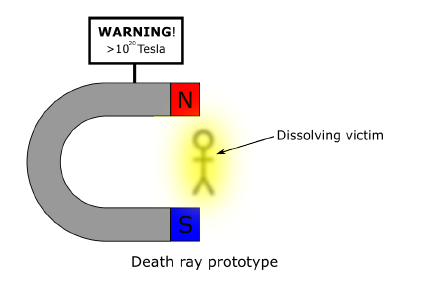