Amidst a slew of Back to the Future quotes, images and analogies the Panopto 2015 conference looked to focus on “The future of video for learning”

If it did manage to pass you by 21st October 2015 was the day Marty and the Doc travelled to in Back to the Future II… See Wikipedia for more details if you are interested! 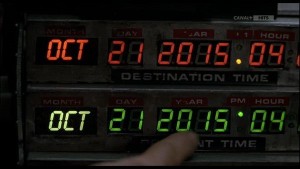 The conference this year was held at the America Square Conference Centre, an interesting feature of the conference centre is that it is built over part of the original London Wall (one of the largest construction projects carried out in Roman Britain) and this has been exposed and displayed in the refreshment area. 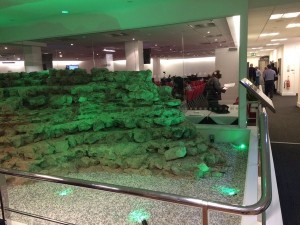 The morning started with an introduction from Panopto’s Head of Marketing Rebecca Avery. Welcoming the new and prospective customers, last year customers from 60 EMEA institutions attended, this year there were attendees from over 90 institutions. The hashtag #panopto15 was requested to be included in all tweets about the day.

The first talk of the day came from Panopto Global’s Managing Director Tom Davy. His theme was Education then and now – and what’s to come.

Tom focused on current trends for a return to physical objects where a digital emergence had threatened to replace that object. The primary example was a return to buying physical books rather than e-readers and the popularity of book reviews by vloggers. (PS if you are going to name check a youtube vlogger, please check how they pronounce their handle, there will be fewer confused people in the audience!)

While trends amongst our incoming digital natives are quite often the hot topic of conversation I found myself questioning the quality and appropriateness of the examples given in this talk. While book sales may be up on past years and e-reader sales are down on previous years, is that really a sign of a return to using physical books, or have e-readers reached market saturation? The same report this information came from (by Waterstones) also suggests sales of physical books are higher due to a higher sales revenue, not really a fair comparison given many eBooks sell for significantly less than their physical counterparts.

While I agree that we are seeing a renaissance of quality physical items I would happily put the topic up for further debate as to the cause and effect of the digital/physical divide.

Tom’s talk was followed by the Keynote given by Graham Brown-Martin. (Author of “Learning {Re} imagined”) While largely a plug for his book Graham did cover a similar theme to Tom of “has the death of physical been exaggerated” (although I would like to have countered most of the arguments made with “is technology just not immersive enough yet”) also some interesting challenges faced by the Higher Education sector today. With video interviews with some forward thinking voices from within the educational community, Graham poised the question of what universities now offer when MOOC’s and Open Learning Materials give a similar education away for free. How can universities adapt to stay valid in that kind of environment? What will set a university education apart from other types of education on offer when having a degree is no longer a guarantee of a job? 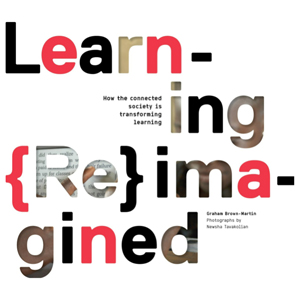 The fourth talk of the morning came from Simon Eder from Voxburner. Panopto had commissioned Voxburner to survey students on their views on learning, technology and video… Unsurprisingly while the results were still fresh off the presses and compilation had not yet finished, the initial results showed that students love lecture capture.

This was followed by the first of the panel sessions; students. Panopto have gathered a student panel in previous years and it has often yielded unsurprising revelations of how much students appreciate being able to revise and play back lectures in their own time and at their own pace to really help re-enforce the learning. Interesting threads that did appear through this year’s panel was that there was an increase in using video submission as a means of assessment, an appreciation of flipped or “bite sized” videos from tutors that they could use for revision and video guidance from tutors for getting started on assignments etc.

After a short break we returned to the Staff panel. The staff panel covered common concerns of academics being recorded, fears of student’s not attending lectures and “Box Set” watching the series of lectures at the end of the course. Interestingly that particular point had been covered in the student panel and the students felt that they did get more from physically attending the lecture and having that engagement with the lecturer. Lecture capture being used for mainly for revision or as a much appreciated catch up if something had prevented them from attending the lecture.

Eric Burns (Panopto CEO) completed the morning talks with an annual rendition of Moore’s law and how the falling cost of technology was making lecture capture almost free…. Billing Panopto’s vision of the future to be aiding institutions in making a “living library of institutional content” akin to the great libraries of centuries past. He highlighted that lecture capture is moving from the stage of “delight” of students getting a new technology to an “expected” mainstream part of their HE education. He also hinted at a number of potentially exciting developments to come, see the day’s twitter feed for some of the highlights.

The first afternoon session was “How has Panopto developed since the last conference? What’s coming next? Andy why should it matter to you?” This session was run by Neil Burdess and Eric Burns from Panopto.

Highlights of this session were:

An option for video upload is being added to the Android client.. While you can record directly from IOS devices Android hardware is too varied to be accommodated by their app, so a post-native app recording can be uploaded through the Panopto client instead. (Panopto version 4.9.1)

Live streaming can be viewed through the Panopto app on IOS

The ability to “quick copy” and create a “shortcut” to a recording in folders other than the one it was recorded to.

Live broadcasting from the Mac client

Ability to record multiple sources/screens with the Mac client

Nesting folders throughout the interface, web and recorder client, removing the current scroll of death from picking a folder to record to.

Addition of a “on air” style “LIVE” indicator in the viewer so students can see when they are watching a live broadcast.

The ability to instantly rewind a live stream in the viewer

The ability to edit in the viewer

Questions and Comments in the viewer will be combined in to a “Discuss” area.

Remove the need for Silverlight in the UI entirely including the editor.

The second afternoon session I attended was “Ask/Tell the experts”

The windows recorder will be updated in a future release to “tidy up” after itself and will not require the user to manually delete the recordings from their local disk.

Panopto will look in to making it easier to copy schedules from broken remote recorders to working ones.

A future update will make it possible to assign “ownership” of a remote recorder to individual users.

Improved functionality for students to change the layout of the viewer will come in a future update.

Ben gave a demo of a custom interface that he has written for the university that links Panopto with their time tabling system. Providing a time-table based UI to the students and scheduling captures to happen from the time table to Panopto remote recorders.

Ben also gave an overview of a custom interface for assessing medical students that interacted with Pan/Tilt/Zoom cameras in a mock hospital environment so that their interactions with simulated patients could be recorded via Panopto with control of the cameras and then shared with tutors, the student and assessors.

Due to my location in the room I was unable to easily take any photos of these sessions. I noticed Panopto staff were recording the sessions so if that content gets made available I will update this post with additional information/links.

Sadly this conference didn’t require me to drive at 88 miles an hour, hook-up a cable to a clock tower in the middle of a storm or fly a DeLorean or a hoverboard. That being said the future of e-learning still looks exciting!