The E-learning team recently attended the Panopto EMEA Conference in Euston Square. The conference opened with an abundance of coffee and pastries (and weirdly rose water on tap) – before heading into the auditorium for an opening talk from Dave Cormier. Cormier is best known for the coining the term MOOC (Massive Open Online Course), and seemed to be somewhat of a celebrity in the teaching and learning sphere.

Cormier spoke about the best way to utilise video for learning. He emphasised that basic, simple tasks could be taught using high budget, high interest videos because they are unlikely to change. For example, in flight safety videos are usually well produced, high budget and give basic evacuation information.

In contrast, the plane exits are always displayed in person by the cabin crew – because these vary in different aircrafts and require prior knowledge from the crew. Cormier states that this can translate to an education environment by using videos to peak student interest – learning basic tasks can be monotonous and sometimes seem unnecessary to the learner. Video allows for these tasks to be immersive, interactive and interesting. It also negates the risk of human error – you can be certain that the same information is being delivered to everyone, every time.

The second portion of the morning concerned active learning. Each of the attendees was given an envelope containing a volvelle (see photo below) – not only did this encourage active learning but it also introduced an element of gamification to the talks that followed. Guest speakers spoke about how they’d used active learning in their own courses, and how this was boosted by Panopto. Topics ranged from Geology to Ethics but all followed a common theme, that active learning supported by video input allows education professionals to move away from a ‘chalk and talk’ approach and towards real world examples. 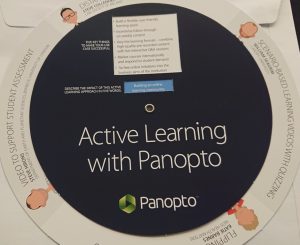 A commonality of these talks was that we’re entering an era of teaching digital literacy to a generation who’ve grown up with the internet. Inés Dawson and Simon Clark, both who had recently completed their PhDs in Biology and Maths respectively, talked about the use of video and the internet to engage a younger audience.

Inés had found success with her YouTube channel Draw Curiosity on which she uploaded playful videos which explored different aspects of science she found interesting. YouTube allows for a mash-up of social media and education. It’s taken off hugely in the last decade – turning bedroom vloggers into celebrities. Simon Clark wanted to take his vlogging a step further. Discussing popular videogame streaming site, Twitch, he talked about how he livestreams himself taking practice GCSE and A-level exam papers and giving advice for Oxbridge interviews.

There are drawbacks for this approach of course – whilst Twitch might be incredibly popular for live streaming video games – a Mathematical Doctor filling out an A-level exam in real time just might not hold the same kind of excitement for viewers. Equally, whilst Inés is a Doctor of Biology – her YouTube channel could be leading viewers down a less than factual rabbit hole.

In his closing talk, Eric Burns – the CEO of Panopto – addressed the drawbacks of using YouTube for sharing educational materials. Whilst creators like Inés and Simon may be able to monetise their videos through adverts, they also relinquish ownership of everything they create allowing YouTube to do with it as they see fit. For Example, an education video on the Mars Rover could be followed on auto-play by a conspiracy theory video about alien life on Mars. In an age of ever emerging ‘fake news’ these sorts of features are becoming a cause for concern. Luckily, Eric handily points out, this is avoided by buying into Panopto.

After lunch, (I had an absolutely huge serving of lamb, broccoli gratin, and a pear salad which was lovely but I did feel massively bloated after and couldn’t fit in any dessert) there were two break out sessions; Teaching and Learning, and Technical.

The Teaching and Learning session allowed for attendees to hear from staff at different institutions talk about how they’d utilised Panopto. First up was two members of staff from Wolverhampton University – who discussed the move from their inhouse VLE, Wolverhampton Online Learning Forum (WOLF), to Canvas brining in Panopto in the process. Following on from the morning’s talks, two of the Education Developers at the University of Wolverhampton had incorporated gamification into their teaching and learning strategy in the form of a ‘flexigon’. 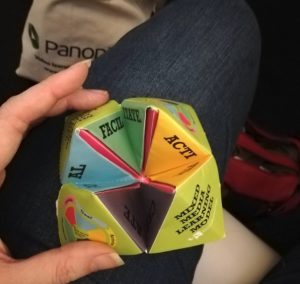 Paul Towers and Gemma Witton explained that active learning was an important step in getting staff onboard with big technological changes across the university.

This presentation was followed by Imperial’s own Moira Sarsfield – the principal Learning Technologist for FoNS. Moira explained that FoNS had introduced active learning through hosting a ‘Summer Challenge’ for teaching fellows – asking them to identify and upload a clip of themselves displaying active learning techniques in one of their lectures. Not only did this help teaching fellows identify their strengths and weakness where teaching techniques were concerned but showcased the skills of the Learning Technology and AV Teams (aided, obviously by the support of the E-learning team).

The day culminated in the Jim, one of the Panopto engineers based in Seattle outlining what’s to come in the roadmap. But this is all very secret, and I can never talk about it.

Of course the canapes and free bar was enjoyed by all – and if you want to know more about what others took away from the day, #Panopto18 on Twitter makes for an interesting read.