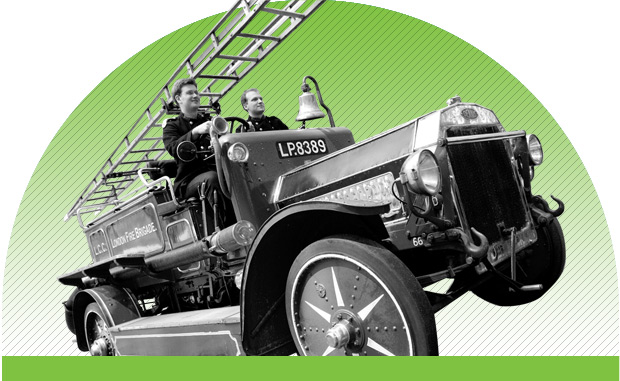 Jezebel is aptly named after a Phoenician princess of Sidon who won’t do what she’s told. Don’t mess with her, either: she pumps water — and attitude! — at 500 gallons per minute.

Jez was there when Zeppelin firebombs covered the London skies. But her story begins a few years before…

Dennis Brothers built Jez in 1916 for the London Fire Brigade (LFB). They tested her on 27 January 1916. Jezabel, known then simply as LP8389, was one of a batch of six fire engines supplied to the LFB on 16 April 1916. She was initially posted to Vauxhall fire station under the threat of Zeppelin raids.

On Tuesday 28 November 1916, a German LGV C.IV seaplane heavily bombed Chelsea in the first aeroplane raid (as opposed to Zeppelin raid) on Britain. Ten people were injured and the raid caused extensive damage. It is probable LP8389 attended these incidents, too.

LP8389 was still at Vauxhall Fire Station two years later when a fire erupted on 30 January 1918. The fire raged at Branton’s cattle market in the early hours of the morning. Relief efforts were obstructed by a dense fog. A wall collapsed suddenly and seven firemen died. Many more were injured. This fire, later referred to as the Albert Embankment disaster, is noteworthy because it caused the greatest loss of brigade life (outside World War II) to date.

A bad luck streak continued for LP8389 on 27 February 1919 when she collided with a carrier’s van in Rotherhithe Street. But in a few short years things would change.

By 1932 LP8389’s life with the London Fire Brigade ended. She was sold to Joseph Crosfield and Sons Limited, a Warrington-based soap manufacturer, when LFB upgraded its vehicles. At this time she had no ladder, so Crosfield fitted an Ajax extension ladder. She spent the next years carrying hose reels and towing a trailer pump for the company.

By the 1950s, students of the Royal College of Science were looking for a suitable means of transport for their President. On finding that there was a fire engine for sale, the students made an offer of £50 for the vehicle. After consideration of the offer, the Joseph Crosfield firm was kind enough to donate LP8389 to the students of the Royal College of Science for the “educational value”.

Jezebel got her name shortly thereafter.

Have a detailed look at Jez’s life in the decades since — including her brief appearance on film, and break down at a wedding.

May 1959 – Jez was stolen from a University of London event by University College, but was recovered a couple of days later.

If you value your life… don’t even try: Jez has lots of fans.

Sitting on Jezebel brings good luck and/or a sore arse for 48 hours.

No one must touch a fresh coat of paint… even royals. Consider yourself warned. In 1965 at Imperial, the Queen Mum almost became a victim of Jezebel’s new paint job, having her pristine white gloves saved from the stain of scarlet coach paint by of one of its quick thinking keepers who shouted: “Don’t touch, Ma’am. It’s still wet!” Gallantry at its finest.

Jezebel might be the least ‘green’ mascot because she only does four miles per gallon! Good thing the old bird stays home most of the time these days…

What’s your favourite Jezebel memory? Share your comments below.
[fb_button]