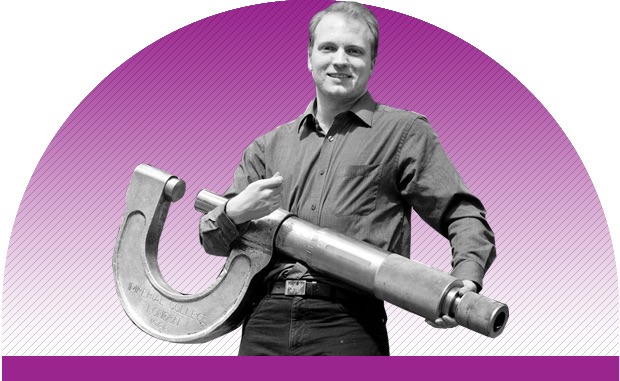 What, precisely, does Mike the Micrometer measure? Foolish attempts by those who dare steal any mascot — especially those daring enough to try to nick Mike, who lives under the President’s watchful eye.

Mike is a large, four-foot long, scale-accurate model of a micrometer that measures minute distances. He is the chunky 170lb (77kg) mascot of the Union itself.

“Temporary insanity” is what alumnus Ralph Cornforth called his actions in 1965.

Cornforth volunteered to be part of a committee comprising representatives from each college to create Mike. “I am still not clear what happened to lead me to volunteer to be the Royal College of Science representative. My best defence is temporary insanity and a background of machining acquired from my father,” says Cornforth.

You see, the College had a history of mascots going missing.

Consider the sad tale of Herbert, the previous year (1964). Herbert was a cast-metal Phoenix — so selected after a popular literary magazine (aptly called The Phoenix). He was named after writer H.G. Wells, once a student at the College. Well, Herbert had the misfortune of being nicked by two female students! These ‘ladies’ (of Churchill College, Cambridge) managed to seduce their way into the Herbert bearer’s flat, get him piss drunk, and make off with Herbie. Unable to retrieve him, the Union contemptuously decided to donate Herbert to the same college.

(Herbert’s male caretaker was so embarrassed he made great attempts to erase his name from our history books. Do you know who he was?)

Determined to save the next mascot from so ignoble a fate, the Union chose a lamppost, but this mascot and idea was quickly discarded. Next, students selected Colcutt’s tower (known today as the Queen’s Tower) to replace Herbert. Surely a tower with 60-foot piling was almost unstealable?

Perhaps… but the Queen’s Tower was essentially impractical to participate in mascotry. (“Oh, look. A big immovable object that is impossible to move and does nothing. Fantastic!”)

Cornforth explains how present-day Mike forged his way into history books and hearts:

“I haunted every machine shop in Imperial College until I got to know the great bunch of guys who ran them and together we worked out how to make Mike from the material available in their stores. The barrel and thimble were made from various sizes of heavy steel tubing. The anvil and fake ratchet were made from solid round steel stock. The frame was cast from brass.”

With due respect, Mr Cornforth, that is crazy. Crazy like a genius!

At the time no other college or university on the planet had a four-foot, brass micrometer as a mascot. (If you wondered, ICU still holds this rare distinction.)

So, it was determined that Mike should be on permanent display in the Union building. A concrete plinth was formed. The sturdy base included a safe with four locks.

These measures didn’t prevent Mike from being violated by University College London in his first year. “They had to cheat massively to do it,” explains Mr Cornforth.

“They hid a sneaky scumbag in the Union building after a dance. In the middle of the night, this apology for a human being let other low-lifes into the building via the back door. These disgusting creeps brought with them oxy-acetylene cutting equipment and used it to cut the clamps securing Mike to the plinth. All of this was, of course, completely against universally accepted mascot-stealing rules — but what else can you expect from University College?”

Can chains hold him? Apparently not; Mike has a very chequered history having been stolen by several colleges in London. Maybe Mike prefers the open road — after all, he is also very well travelled, having made many appearances on the University Challenge TV programme.

In addition, Mike is known to venture into the bar on many occasions… His favourite drink is a matter of great debate. However, it’s agreed Mike drinks like he has a hollow thimble.

On 10 July 2002, he disappeared at the President’s dinner, of all times, before being recovered three months later from behind a phone box outside the Royal College of Music.

It’s said that the best way to carry Mike is with the assistance of a ‘six-footer’ pole held by two people of equal height. The Live! Union website reports that Mustafa Arif (C&G President and ICU’s ‘Mike-bearer’ is Mike-bearer for life… which begs the question, is this just a snarky comment, or can university doctrine join man and mascot for life?

Mike the Micrometer attends all important Union events at the discretion of the President. The President appoints a ‘Mike-bearer’ if he or she feels incapable of bringing Mike to any event. (See rumour above regarding length of ‘Mike-bearer’ title.)

At the moment Mike is the most securely stashed mascot in the history of mascotry. Doors to all offices surrounding him were immediately locked following a brash daylight thievery of C&G’s mascot, Spanner, in 2004…

Is Mike really the most heavily guarded mascot… or is it just good PR and melodramatic fans? Share your comments below.
[fb_button]