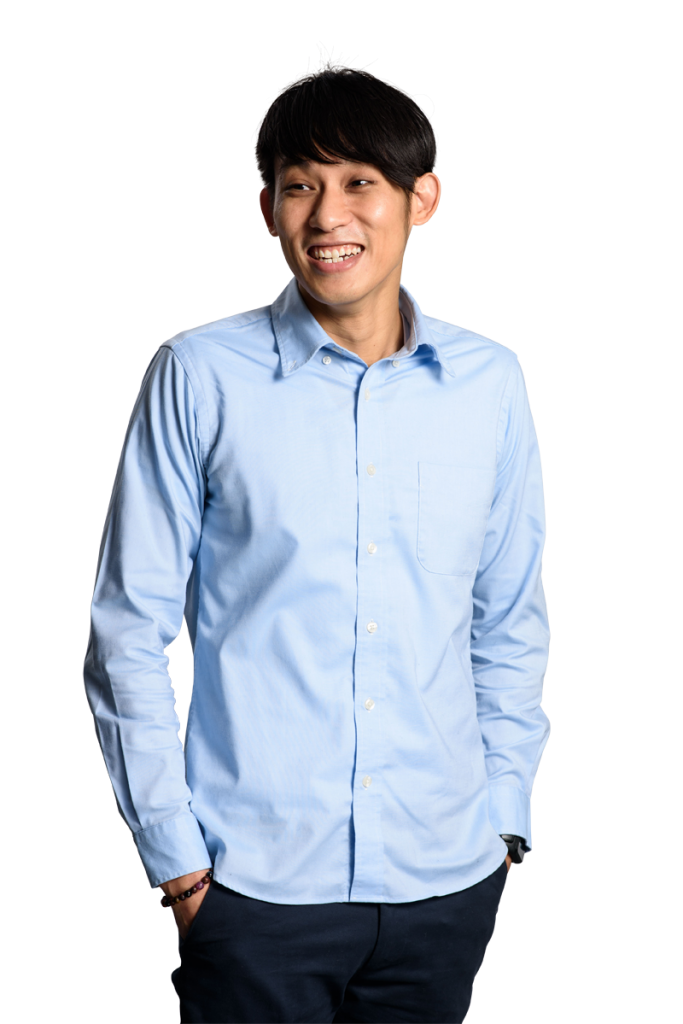 If you’re thinking of going to Amsterdam, go to Haarlem instead. No, seriously.

Haarlem is a smaller city just 15 minutes away from Amsterdam by train. It’s got far fewer tourists, cheaper and nicer accommodation, and way better food. PLUS, it’s a mere 20 minute bus ride to the beach!

With the final assignment of term 2 done and dusted, we decided to take advantage of Eurostar’s new direct train from London to Amsterdam (£35 one way). Well, almost direct. It does do a short stop in Brussels and the total journey is about 3.5 hours. Nevertheless, it’s still way more convenient than a flight.

The train gets you right into Amsterdam Centraal Station where you can get a regional travel ticket, which basically opens up all of the little cities, towns and parks around Amsterdam to you. That includes Haarlem, the Keukenhoff Gardens, the beach at Bloemendaal, the little windmill village of Zaanse Schans.

Okay tbh, my wife and I aren’t typical sightseeing travellers. To us, an authentic meal in a local restaurant is far more appealing than any old monument. But Holland is most definitely home to some beautiful sights.

The Amsterdam Regional Travel Ticket gets you unlimited rides on buses, trams and trains during your stay.

Amsterdam is a gorgeous city and, in the sunshine, it’s simply glorious. There are paddle boarders in the canals, leafy trees dappling the streets with sunlight, and people out and about, even playing giant games of chess. In fact, it was so sunny while we were there that the tulips were wilting in the heat, although even in death, they exuded a surreal beauty. 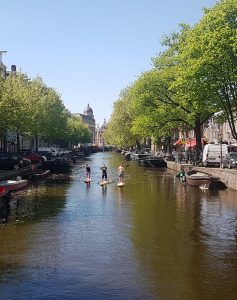 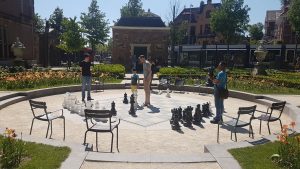 We spent a day in Amsterdam just wandering the streets without an agenda. Amid all the hustle and bustle, there were little pockets of tranquillity, like the old book market we found at Oudemanhuispoort, where second (or third or eighth) hand reads are still being peddled from old wooden booths bolted to the stone walls. Perhaps fittingly, the book market is just adjacent to the law faculty of the University of Amsterdam, whose gardens are worth taking a stroll in. 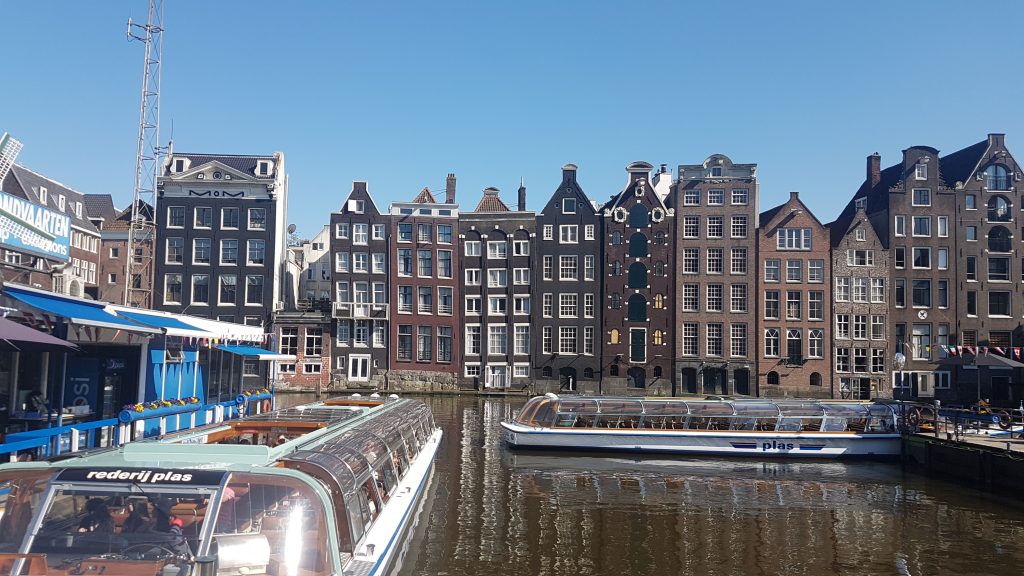 Is it a consequence of studying in a medical school that I thought the building was having a stroke?

Another treat was sitting down by the Oude Kerk and listening to its bells play, surprisingly, the Sesame Street theme song. It put a grin on the face of everyone in that square! Interestingly, the church is right smack in the middle of the famous Amsterdam Red Light District. The story goes that it was built there so sailors could pop over for some quick absolution before another long and dangerous voyage. Today though, the Red Light District is mostly closed. Only one or two windows were open as the city clamps down. If allegations of human trafficking and abuse are true, that’s definitely a good thing, but you’d better hurry if you still want to see the place for yourself.

For all its charms though, Amsterdam is really only worth a day. There is so much else to see around it. We found a lovely loft apartment in Haarlem that could easily sleep three and made short day trips from there. First place on the list, THE BEACH. Bloemendaal aan Zee will never be able to compete with the likes of Portugal or Spain. But after 8 months in gloomy London, this was a dose of vitamin sea that was sorely needed. We got to soak up loads of sun, play in the sand and started to look vaguely Southeast Asian again. 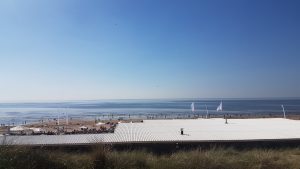 The beach at Bloemendaal aan Zee. It’s not Ibiza but my sausage legs ain’t complaining.

If you can spare the time, the windmills of Zaanse Schans are also worth a quick visit. They are still grinding out some delicious old mustard, and there is also a huge cheese shop where you can taste pretty much everything in the shop. We ended up with a delicious smoked cheese that we can’t wait to break into.

The old windmills of Zaanse Schans, still merrily churning out flour and mustard.

Sadly, we didn’t take many pictures of Haarlem but perhaps that is a reflection of how at home we felt there. Every night, we were serenaded to sleep by the softly chiming bells of the Grote Kerk, its tower brightly lit on the horizon. Since 1562, the bells have been rung between 9 and 9:30pm to signal the closing of the city gates and the tradition has carried on ever since. 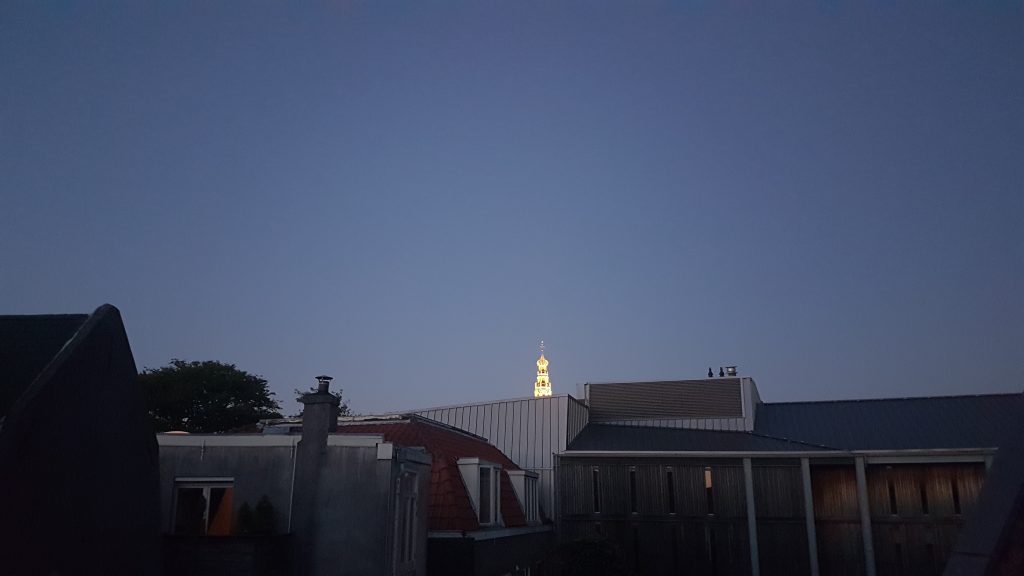 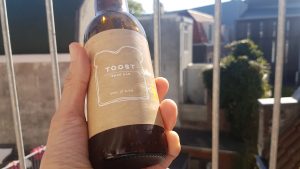 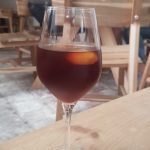 Holland, where toast comes in a beer bottle and coffee comes in a wine glass. Both tasted great.

We are proud gastrotourists so no trip is complete without a huge serving of local food. I like having a good kebab on the first night in Haarlem and a quick Google search brought us to Shalom Grillhouse, which turned out to be a whole new culinary experience. Here the shawarma is served alongside plates of Middle Eastern “sambal” which you mix into the meat until it’s as tasty and spicy as you like. I love that it was proper spicy too. None of that middling Tabasco mildness. This was an absolute revelation and I really wish we’d had enough time to go back. 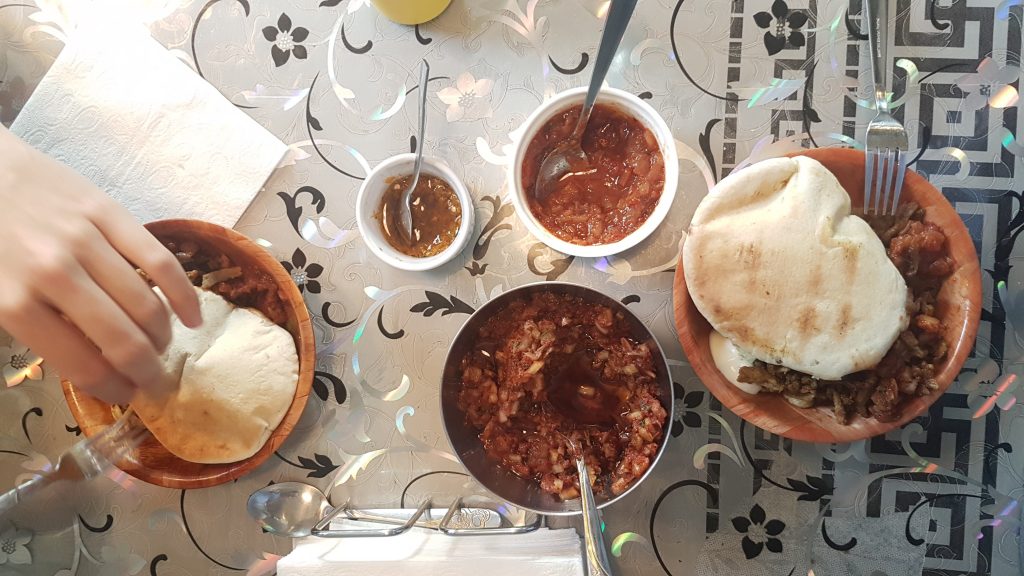 But Haarlem has treats galore. On our second night, we went for the famous Dutch rijsttafel. Literally translated as “rice table”, this is a set meal of rice with 10 to 12 Indonesian side dishes that the Dutch took home with them from their adventure in the Indies. De Lanchende Javaan is a Haarlem institution run by three brothers who moved to the Netherlands from Indonesia more than 30 years ago and are still cooking up a storm. Their version of rijsttafel includes satay, sayur lodeh (curried veggies), achar (spicy pickles), beef rendang (spice paste), gado gado (Indonesian salad with peanut sauce), sambal egg and much more. It was so good we literally forgot to take any photos. I could hardly believe I’d found better rendang in Holland than in most places in Malaysia and Indonesia.

The rijsttafel at De Lachende Javaan was so delicious that we forgot to take a photo, so I’m going to have to leave you this one from Pierre Vanderhout’s Travel Blog

We needed something to wash down all that good food. Luckily, the Uiltje craft beer bar was just around the corner. Uiltje is Haarlem’s very own craft brewery who have 30 or so different beers on tap at any one time. You can get tasting flight for just €10 and they do some amazing things with stout especially. Before Uiltje, my experience with stout had been limited to Guinness. Then I spent an afternoon sipping stout laced with liquorice, cherries and tiramisu and now things will never be the same. I also had my first taste of smoked beer, which is made from malted barley dried over an open flame and fills your nose as it pleasures your taste buds. 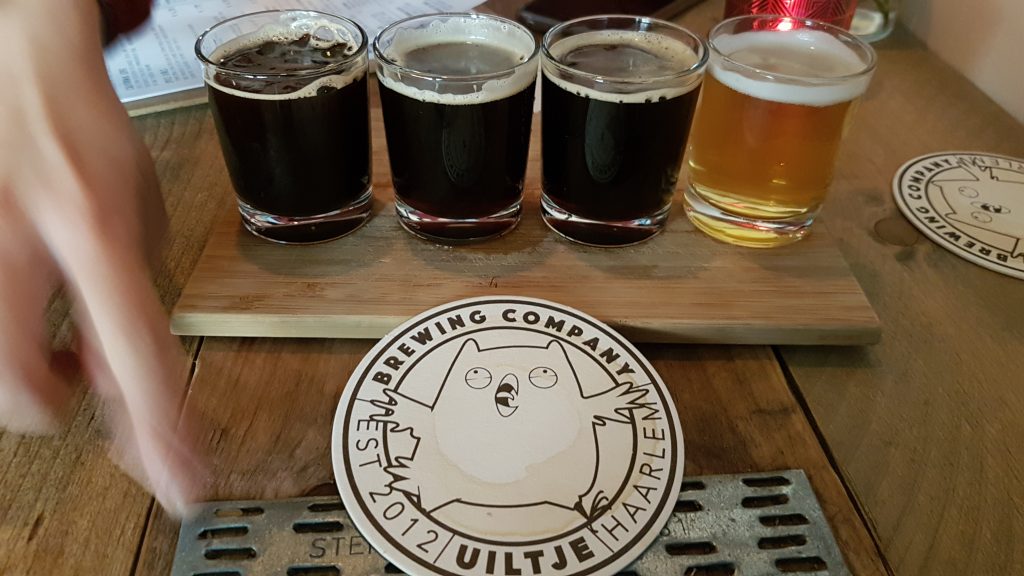 Uiltje’s tasting bar in Haarlem has more than 30 beers on tap and tasting flights to get you through them. From L – R: Baltic Porter with Cherries; Tiramisu Stout; Heavy Stout with Liquorice; and Smoked Rauchbier

Perhaps the only downside to Dutch craft beer is its high alcohol content, usually 9 to 13%, which limits how much you can drink. But I suppose that’s a good thing. Dutch beer is for savouring, not getting sloshed. Still, that didn’t stop us from popping into the local supermarket and hauling some of the good stuff back home. 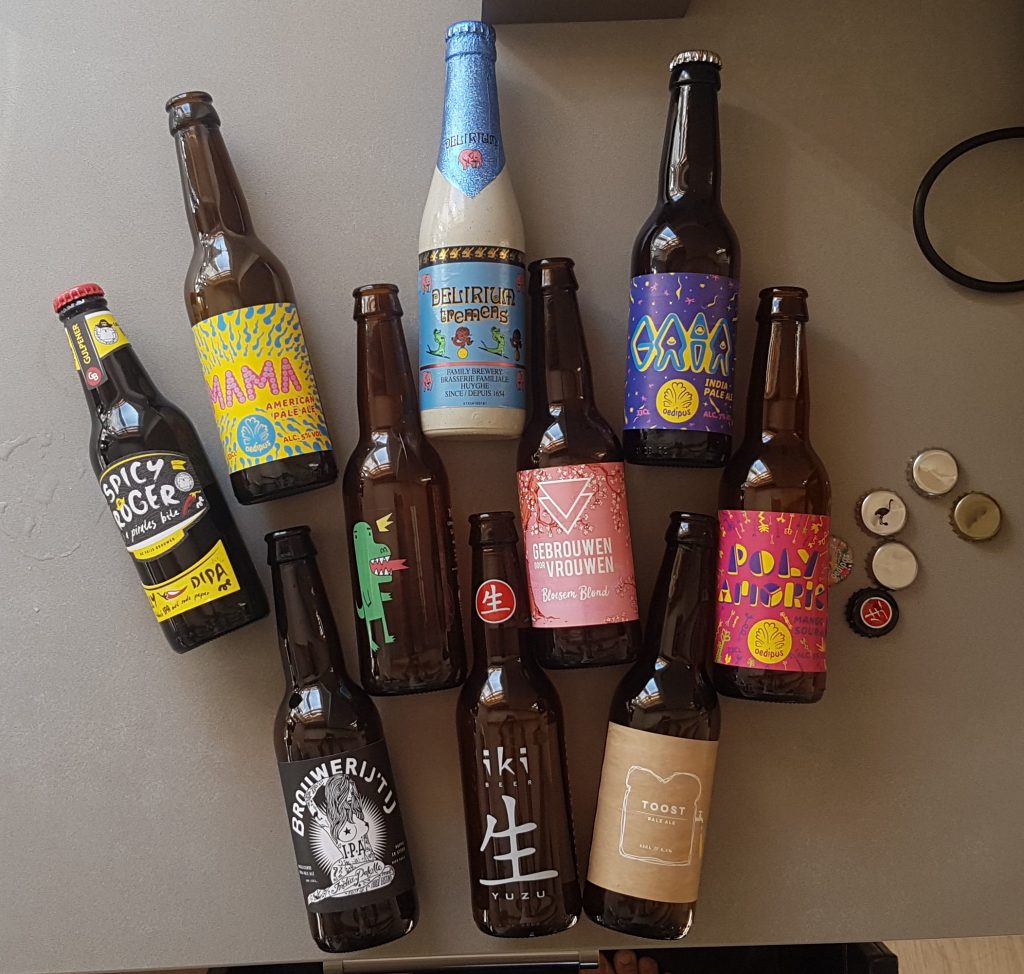 Until next time Holland! 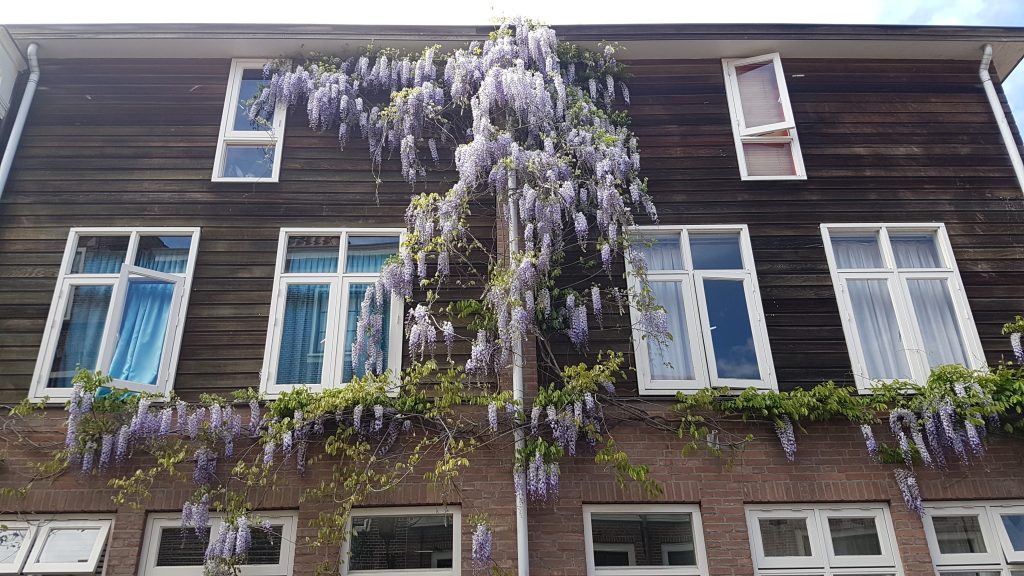