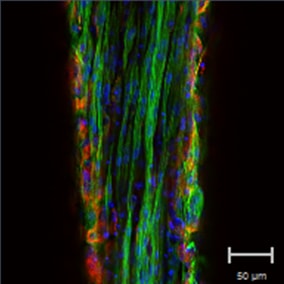 On collaborations with Cambridge, Glasgow and Hamburg

I have recently been working in collaboration with Amer Rana and his Ph.D student Baraa Kwielder in characterising the effects of different cell types in engineered heart tissues (EHTs). Amer and Baraa have perfected endothelial cell differentiation and have been able to make both coronary and endocardial cells. To characterise these cells I have been working in Sian Harding’s lab to test the effect of different endothelial cell subtypes on force production in EHTs.

EHTs were generated at Imperial with cells from Cambridge and non-invasive contractility measurements were made over time with technology from Thomas Eschenhagen’s lab in Hamburg.  Therefore, in this project we have brought together expertise from three different labs, Amer Rana’s who is an expert in cell fate decisions specifically here dealing with endothelial cells, Thomas Eschenhagen who set up the EHT platform and characterises iPSCs, and Sian Harding’s group who produced the iPSC-CM and carried out the experiments. The EHT platform allowed us to automatically analyse in 3D force contractions in a semi-automated fashion with less chance for human error. The preliminary results of the first experiments were really encouraging with a significant increase in force seen in iPSC-CM EHTs co-cultured with endocardial cells but with no difference between iPSC-CM coronary endothelial cell EHTs and control.

This has important implications, one that supporting cell types can increase the force production of iPSC-CM, and two, that a difference can be found on force production when using endothelial cells with different phenotypes. We will be continuing this collaboration between the three labs, digging deeper to understand more about how different cell types contribute to hydrogel forces. This project has far-reaching aims, including to create a robust heart tissue construct in the lab: this will need collaboration from more labs in the centre to make a three-layered hydrogel. Lastly, because we are interested in regenerative medicine we aim to make hydrogels so that they can be transplanted into animals of heart failure. The cell therapy project is being carried out currently with much larger hydrogels, and we hope  now to improve these too based on the results of adding in endothelial cells.

I am also working in collaboration with Godfrey Smith’s lab in Glasgow and Thomas Eschenhagen’s lab in Hamburg to work on a larger animal model of myocardial infarction as a test bed for EHTs. The project lead for this is Richard Jabbour who has brought the rabbit model from Glasgow and large EHT technology from Hamburg so that in Sian Harding’s lab in London we can start to test if hydrogels can help ameliorate the signs of heart failure. This PhD project is in its 2nd year and the model has been set up at Imperial and large EHTs are being produced so that the first few hydrogels are just being tested for iPSC-CM retention. Firstly, we are testing whether large EHTs can be retained at early time points and are setting up optical mapping so that grafted hearts can be analysed on a whole heart Langendorff system. After the initial optimisation phase of cell retention, we will put iPSC-CM large EHTs on rabbits with myocardial infarcts to test whether hydrogels can be used to repair damage in a large animal model.

The work written about here could not have been possible without the excellent communication between the labs and the trips made around the country and to Germany to share key knowledge and expertise. Special mention also has to go to Thusharika Kodagoda and the stem cell team at Imperial, because stem cells are like babies and need loving every day.