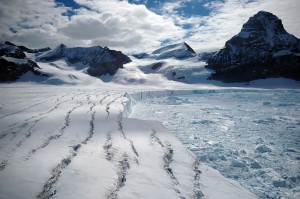 On 27th October I convened a meeting at the Royal Society of London to discuss the results of a recent 20-year research horizon scanning exercise for Antarctic Science (Kennicutt et al. 2014). Part of the discussion focused on the research needed to better quantify Antarctica’s likely contribution to sea level rise in the coming decades and beyond, as published in the new Intergovernmental Panel on Climate Change (IPCC) Synthesis Report.

The report states that, ‘Global mean sea level rise will continue during the 21st century, very likely at a faster rate than observed from 1971 to 2010, and will likely be in the ranges of 0.26 to 0.55 m [in the lowest emissions scenario] … and … 0.45 to 0.82 m [in the highest emissions scenario – the closest to “business as usual”]’. It also states that, ‘Based on current understanding, only the collapse of marine-based sectors of the Antarctic ice sheet, if initiated, could cause global mean sea level to rise substantially above the likely range during the 21st century.’ There is medium confidence that any additional sea level rise would be no more than tens of centimetres.

One of the speakers at the event, Prof. David Vaughan, the Director of Research at the British Antarctic Survey, supported the IPCC’s position by remarking that he knew of no glaciologist who would strongly advocate a different position to this, given the evidence at hand. As a glaciologist myself, I can easily accept Prof. Vaughan’s comment and I don’t believe it is controversial among the community. I was, however, provoked by it to consider the relevant issues a little further, given the uncertainties noted by the IPCC, and to take the opportunity to discuss it with colleagues at the meeting.

Historically, ice sheet responses to global warming have been responsible for sea level changes of a metre or more per century. As the glaciers retreated after the last ice age, sea levels rose by an average of over a metre per century between 20,000 years ago and 10,000 years ago – a total of 120 m. Records also show that the rate of sea level rise can exceed this, however. During the so-called ‘meltwater pulse 1a’ (MWP1a) episode around 15,000 years ago, an increase of around 7 m per century took place. The cause of MWP1a remains uncertain, with some pointing to the rapid decay of the North American ice sheet, whereas others link the change to Antarctica. It may be that both ice sheets were involved to some degree, and the details of the issue remain hotly debated. The point to note is that changes in the cryosphere are certainly capable of causing global sea level to rise at a higher rate than the IPCC suggests.

It is worth considering  whether we can rule out the possibility of a new meltwater pulse being locked in somewhere in Antarctica or Greenland, ready to be released to the ocean once some threshold has been reached. As the IPCC notes, several regions of the West Antarctic ice sheet (in particular) and East Antarctic ice sheet appear close to or at a physical threshold of change, where ground ice retreat into deeper (below sea level) terrain leads to further accelerated loss of ice to the sea (often referred to as marine ice sheet instability). Papers earlier this year by Joughin et al. (2014) and Rignot et al. (2014) point to such irreversible change having already begun in the Amundsen Bay region of West Antarctica. According to Joughin et al. (2014) the full effects of such change may take several hundred years, in line with the IPCC’s position. Evidence from the other side of West Antarctica demonstrates a region the size of Wales being highly sensitive to future ocean warming (Ross et al. 2012), and that such warmth may be delivered within a few decades (Hellmer et al. 2012). Across the continent in East Antarctica, the structure of the underlying bedrock reveals evidence of major ice recession in the past (Young et al. 2011), hinting that the ice sheet response to warming is not necessarily restricted to West Antarctica. Indeed while West Antarctica may be losing mass more quickly than anywhere else on the planet, the greatest potential for sea level change lies in East Antarctica, which about ten times greater in volume.

So, after considering Prof. Vaughan’s point that no glaciologist would differ markedly from the IPCC on Antarctic ice sheet collapse, I returned a question to him and those gathered: how can we be sure that the Antarctic ice sheet won’t respond to ocean warming more quickly than expected in certain regions? The answer is we can’t be certain even though, like Joughin et al. (2014), we may consider it unlikely. While I did not dispute Prof. Vaughan’s point, in the light of both recent findings and more established figures on how ice sheets can change during episodes of global warming, there is surely a non-zero risk of much greater sea level rise over the coming decades than the IPCC alludes to.

Quantifying this risk is difficult – maybe impossible at present – and as a consequence is likely to be highly controversial, which is why the IPCC does not tackle it. The problem is that quantifying a non-zero risk of global sea level rise over 1 m in the next 100 years is a far more challenging problem – for both scientists and decision makers – than restricting the debate to what we consider most likely. Maintaining this restriction on the debate is neither safe nor sensible, however.

Glaciologists will point to the research needed on the Antarctic ice sheet’s sensitivity to ocean warming to advance the debate. In 20 years as a glaciologist, I have been surprised on numerous occasions by what we discover about the flow and form of past and present ice sheets. I am utterly certain that amazing new discoveries lie ahead. For this reason, an appropriately sceptical scientific attitude is to accept that our knowledge of Antarctica remains woefully inadequate to be certain about future sea level rise, and to always challenge the consensus constructively.

The solution lies in our ability to model the ice-ocean system in a way that allows confident predictions of the ice sheet response to ocean warming. To do this we need two things. First is better input data, by way of high-precision landscaping beneath the ice sheet in regions most sensitive to change, and in areas where no data have been collected (and there are several completely unexplored parts of the continent). The data collected would also allow us to better understand the process of ice flow in key regions of potential change. A second advance needed is in the coupling of ice-sheet and ocean models. Both are challenging, but well within our abilities to achieve them. Indeed the horizon scanning exercise discussed last week made such investigations a priority.