See the full list of blogs in this series here. 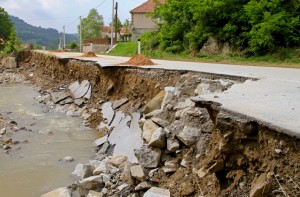 Environmental hazards are becoming more frequent and severe, with potentially serious impacts on people, supply chains and infrastructure globally. Advancing our knowledge and understanding of these hazards, and the processes involved, will allow us to better predict, plan for and manage the risks in order to increase resilience to these changes.

This session focussed offered perspectives from academia (Imperial College London), the world of (re)insurance (Willis Re) and the charity sector (Oxfam).

David Simmons, the Head of Strategic Capital and Result Management at Willis Re, began proceedings and impressed us by speaking with no slides or notes, describing it as a ‘liberating’ experience. Despite (or perhaps helped by) the absence of visual aids, his delivery was nevertheless engaging and humorous.

His talk focussed on the world of reinsurance, which he assured us was the ‘sexy’ part of the insurance sector, specialising as it does in catastrophe risk. He contrasted this with the banal nature of regular insurance work and the social death that ensues for most practitioners.

We were told that reinsurance, which covers the insurance companies themselves against major disasters, is suffering from too much capital. Stoically, David explained the reasons behind this: essentially, due to financial uncertainty in other sectors, no one else could offer the low risk and high returns on investment now commonplace in the reinsurance industry. This he attributed to a much greater understanding of catastrophe risk over the last few years than had previously existed.

Following on from Don Friedman’s modelling of hurricanes in the 1980s, which provided a basis for hazard and probability analysis, David explained how there has since been massive investment in producing ever more reliable models to understand these elements. Indeed, the process of developing models in itself seems to have driven the understanding of various components and allowed constraints to be placed on the ‘unknown unknowns’, a Rumsfeldism which seems to make its way into most talks on modelling these days.

The price of reinsurance has apparently dropped substantially in recent times, driven by the unprecedented levels of investment. In particular, we were told that reinsurance for many parts of the developing world comes at negligible cost, due in part to a reduction in the number of deaths from droughts as a result of more reliable aid. Although this is clearly a positive development, David was keen to point out that the arrival of aid was often too slow to prevent significant human suffering and damage to assets and infrastructure. The focus has therefore turned to more timely interventions and having better systems in place for disaster response.

We learnt that insurers are now playing an important role in driving best practice from governments, with many African countries having to present draft disaster response plans, audited reports on actual responses implemented by the government and the results of anti-corruption tests before they can join insurance programs.

David’s talk closed with commentary on the growth of various large-scale insurance schemes, many of them covering multiple countries. He cited the example of the African Risk Capacity, which is expanding from 5 to 10 members, and a scheme in the Caribbean which is now expanding into Latin America. He did highlight some pitfalls with the more inclusive approach to insurance, contrasting the approach to flood insurance in the UK, where higher risk properties pay an additional premium, with the French system where all households pay the same, thereby removing some of the incentive for individuals to reduce their risk.

Our second talk of the session came from Martin Rokitzki, former resilience advisor for climate change adaption at Oxfam. Humbly professing to be ‘the least scientific person in the room’, he could nevertheless point to 15 years of practical experience working on climate change and environmental issues.

His talk began by looking at what is actually meant by the term ‘resilience’, which appears to have numerous definitions relating to one’s ability to cope, adapt, prepare or thrive when faced with shocks, stresses or uncertainties.

When presented with such an uncertain framework, we were unsurprised to learn that there is no ‘cookie-cutter or cook-book’ for resilience and that the term may be applied to a huge range of social and economic groups. By talking about his experiences with Oxfam, Martin was at least able to narrow his focus to addressing the resilience of the world’s poor.

Even within this constraint, understanding hazards and impacts was presented as a multi-faceted exercise. Variations in the spatial extent of damage, its intensity, duration, rate of onset and level of predictability could all have profound effects on the planning process. Counterintuitively, Martin felt that slow-onset hazards were often the hardest to address and his talk focussed on how to deal with challenges of that nature, such as the East African food crisis, glacier melt in Nepal and salt intrusion in Tuvalu.

We were told that Oxfam’s approach to resilience involves 5 key areas: livelihood viability (i.e. the economic buffer to disaster); innovation potential; contingency resources and support access (i.e. provision of aid); integrity of the natural and built environment (in the case of the extreme poor, they are directly dependent on the surrounding natural environment); and social and institutional capacity (i.e. governance).

In contrast to the preceding speaker, Martin’s presentation abounded with eye-catching schematics, highlighting various approaches to disaster management. Key to these were the integration of policy and projects to get a successful outcome. To illustrate this, he presented us with the ‘Cycle of Drought Management’ which moves through stages of preparedness, disaster response and relief, reconstruction and mitigation. Alas, the paucity of data in 80-90% of affected areas means that the preparedness stage is often a huge challenge. Our presenter highlighted this as a key reason for Oxfam to collaborate more closely with scientists.

Towards the end of his talk, Martin touched on Oxfam’s R4 approach to risk, encompassing risk reduction (managing resources well), risk transfer (insurance), risk taking (credit for investment) and risk reserves (savings). Without this sort of strategy, seasonal food shortages could easily become year round famines. As part of this Oxfam has been helping to administer financial services in remote rural areas and developing a focus on flexible and forward-looking decision making.

Martin’s final message was that we need more collaboration between the ‘thinkers’ and the ‘doers’ – a clear call for the science community to engage more directly and more frequently with aid agencies and other environmental organisations.

Our final speaker of the session was Imperial’s very own Professor Ralf Toumi, who described his ongoing work on the OASIS project, an open access model for looking at the impacts of extreme weather events on the built environment.

His main driver for the project was the limited number of companies providing assessments of risk in this area, thereby giving a fairly narrow field of views on risk to the insurance sector. He reflected that this has not been helped by a continuing barrier of information between researchers and insurers and the ‘black box’ approach to disaster modelling which exists within the commercial world.

Following the previous speaker’s flurry of eye-catching diagrams, Ralf was not shy to present a few schematics of his own, illustrating the concepts behind OASIS. These highlighted the user’s ability to select combinations of models to give a tailor-made view of risk, including a broader spread of results and a greater understanding of model bias and uncertainty. To highlight the point, Ralf asserted that vulnerability modelling (i.e. the damage caused by an event) has a much greater level of uncertainty than hazard modelling. Indeed, one of the key challenges of the OASIS project has apparently been to get hold of datasets on damage, information which some players in the industry have been reluctant to provide.

A further challenge, we were told, is the effect of giving insurers greater experience in using this modelling framework: the desire for greater complexity. Whilst models appear to be ever more powerful (a 30 year dataset can apparently now be used to predict a 1 in 1000 year event!) there is a serious challenge to translate this complexity from the academic / journal environment to insurance professionals. There has also been a need to standardise the wide array of different data formats associated with OASIS’ component models.

Despite these challenges, it appears that OASIS is flourishing. Our presenter proudly displayed a series of media articles after their press release went viral, along with a list of 44 members of the OASIS Loss Modelling Framework, a list that includes numerous insurance and reinsurance companies. Their many associate members include a variety of government bodies, academic institutions and IT companies.

A combined question and answer session followed on the three presentations. It began with the question of how all these ‘big complex’ models have been validated with data. Professor Toumi agreed that validation is a huge issue, although hazard validation is much easier to do, using historical datasets, than validating predictions of damage, which sometimes diverge wildly. David Simmons was able to point to a recent paper he had written on model validation and highlighted that the non-stationary world we live in means that there are never sufficient data. Nevertheless, he believed that even non-validated models are better than nothing and that the modelling process aids understanding as much as the end result. He also highlighted that satellite datasets can act as a useful first-pass method for validating models.

The second question focussed on how we transition from looking at short-term resilience to combatting longer-term changes. Martin Rokitzki responded that although we live in a short-term world, transformative scenario planning is more commonly done nowadays, which is often based on narratives rather than data alone. Adaptive management is also more common.

Another audience member (currently working for one of the London mayoral candidates) wondered what question we should pose to mayoral candidates of large cities in relation to risk management and resilience. The panel were somewhat stumped by this, but (ironically) opted to answer the question about a question with another question: Martin Rokitzki wondered who has responsibility for risk management. Should adaptation be a government service, should it be borne by individuals or even by the private sector?  David Simmons cited an example of the World Bank trying to cover industrial areas against earthquakes and reward good design through financial incentives. Unfortunately, the scheme struggled through a lack of political will to take decisions which might be unpopular with their electorates, despite having clear long-term benefits.

The final question related to the possible impacts of a catastrophic asteroid impact and the huge disparity between the insurance fund set aside to cover Florida’s coastline from storm damage and flooding ($2 trillion) compared to a much smaller sum assigned globally for larger-scale catastrophes like asteroid impacts ($0.5 trillion). David Simmons responded that the insurance industry focuses on the short-term, partly due to the 5 year tenure of most CEOs. This makes asteroid impacts beyond the timescale of concern. Another contributor to the disparity is that flood insurance is governed by a regulator in Florida. Despite this, David felt that Florida now has enough reinsurance capacity and that there is now a need to better understand hazards like asteroids.

And as we all dwelt on what sort of cosmic destruction may be in store, the session was brought to a close, leaving us with the much simpler conundrum of what to have for our lunch.

Watch a video of the talk on our YouTube channel.