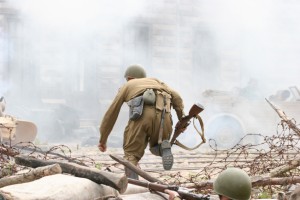 , produced by the Institute for Economics and Peace, said that although OECD countries became more peaceful in 2014, there has been substantial increase in annual war-related deaths since 2010, and there are now more refugees than at any time since the Second World War. It is currently difficult to give a definitive answer as to whether climate change could exacerbate these problems.

Climate change is likely to exacerbate a range of environmental problems including heat waves, water shortages, and extreme weather and flooding, but whether or not this will lead to increased rates of armed conflict is still the subject of research. According to the IPCC’s Fifth Assessment Report, some of the factors that increase the risk of conflict – recession, low per capita incomes, and inconsistent state institutions – are sensitive to climate change, but this does not necessarily mean that climate change will lead directly to higher rates of war and unrest.

Environmental factors more generally do play a key role in triggering unrest. An example of this is the role of water shortages in causing the recent Syrian war: farmers who had lost their livelihoods were forced to migrate to the cities, where they struggled to integrate and find work. The resulting uprisings then played a part in triggering war. Although conflict is sometimes triggered by a single environmental problem which acts as a tipping point, environmental factors usually combine with other factors to exacerbate war and unrest.

In his book, Global Crisis: War, Climate Change and Catastrophe in the Seventeenth Century, Geoffrey Parker argues that the unusually cool conditions (a 3 degree lower global temperature) during the seventeenth century “Little Ice Age” played a key role in sparking the steep rise in conflict sometimes referred to as the General Crisis. Surviving records from Europe and Asia paint a picture of extremely widespread famine and instability. In Europe for example, almost no country avoided war during the 1640s, and between 1618 and 1678, “Poland was at peace for only 27 years, the Dutch Republic for only 14, France for only 11, and Spain for only 3.”

Parker argues that the seventeenth century environmental deterioration caused by a decrease in solar energy reaching Earth and an increase in volcanic and El Niño activity has had “few parallels” and that “the frequency of wars and state breakdown created unprecedented political, social and economic instability.” Although the modern world is more integrated than the world of the seventeenth century, the argument linking periods of environmental instability with increased rates of conflict is potentially applicable to human induced climate change.

Dr Mark Workman of Imperial College London said, “The hypothesis for the causes of the General Crisis is very compelling”, but cautioned that “in the modern globalised and increasingly interconnected world the causative mechanisms are very controversial and I think the jury’s still out as to the degree to which environmental impacts are important as a cause in contemporary conflict.”

But environmental problems don’t always lead to conflict. “One thing that’s been missing from the current narrative is that there are opportunities for confidence building measures and co-operation,” says Dr Workman.  Disputes over trans-boundary rivers often lead to increased cooperation because neighbouring regions or countries have an incentive to work together to make sure water is distributed fairly. “As history has demonstrated, through confidence building measures and sensible mechanisms of water allocation or resource allocation you can actually find ways to make one plus one equal two”, continued Dr Workman.

More research is needed to explain the precise mechanisms by which environmental factors spark conflict, and how this relates to climate change. Key to this is acquiring more and better data. Relevant data can be hard to obtain at present; for example the global FAO food price index is of little use in evaluating stressors in Tunisia and Syria, both of which have very localised food markets. In addition, research has tended to centre on the Middle East and North Africa Region, so there is a need for more widely applicable research.

A high proportion of global conflicts currently occur within, rather than between, countries, which would also apply to conflicts involving environmental problems, so future work is likely to focus especially on this area. Dr Workman says, “Environmental enhanced conflict will be more a subnational manifestation, because there is world trade at a national level, whereas within fragile conflict-affected states, which are home to nearly 20% of the world’s population, there are limited trade and transport mechanisms to address the resource arbitrage.”

With its wealth of technical expertise, the Grantham Institute at Imperial College London is well placed to bring together the fragmented work and carry out new research in this area. There will be three key steps involved in taking this forward. First, knowledge gaps need to be identified. Second, theories about how conflict interacts with environmental factors need to be verified using case studies. The third and most challenging step is developing ways of predicting how environmental factors may exacerbate or cause conflict in the future.

A publication released last week has highlighted an agenda for research.