In the lead up to her retirement, Dr Letizia Foroni, Principal Teaching Fellow in the Department of Immunology and Inflammation, reflects on her career in haematology.

Rest in Peace (R.I.P.): that is what I feel will happen in a few weeks. I will be able to rest…and not feel guilty for it!

I am about to retire, at the end of February 2022, exactly 40 years since I started working at what was then known as the Royal Postgraduate Medical School and Medical Research Council Leukaemia Unit. This was where, totally out of the blue, I landed on 9 June 1982.

A one-way ticket to London

I arrived from Italy to attend the worldwide renowned ‘Advances in Haematology’ course after a preliminary contact with the head of the Unit, Prof Lucio Luzzatto, and my consultant, Prof Corrocher. What only my mother knew was that I had bought a one-way ticket on a plane from Milan Airport. Verona, where I was born, didn’t even have an airport from where one could fly to London.

My mother was very concerned! And so was Professor Lucio Luzzatto who, at the end of the course, asked me when I was intending to join the Unit. I said (like it was the most obvious answer): “On Monday next week!”. Since then, Lucio has coined the phrase: “If they are not mad…we don’t want them!”. Jokes aside, Lucio swallowed and coughed a couple of times and then said: “We need to have a chat!”. I came back the following Monday, and the rest is history.

I joined the department two weeks later, and under Prof Luzzatto’s supervision, I gained a PhD in Molecular Medicine in 1990 with a thesis on immunoglobulin (Ig) gene rearrangements in leukaemia. My PhD examiners were Prof Cesar Milstein from the MRC in Cambridge and Prof Mel Greaves from the Chester Beatty Institute in London. The former had already been awarded a Nobel Prize in 1984 for developing the hybridoma method of producing monoclonal antibodies. He clearly knew ‘a bit’ about immunoglobulins. The latter is an international expert in the genetics of leukaemia. The viva lasted over 3 hours! I never perspired so much since, but luckily for me, the two examiners spent a lot of time discussing interesting topics among themselves. Prof Milstein still signed my PhD thesis with “Passing with flying colours”!

This was, however, a fantastic period (1982-1988) when I met the ‘Fathers of the British Haematology’: Lucio Luzzatto, a mentor throughout my whole career and still a dear friend, Prof Daniel Catovsky, Prof Ted Gordon-Smith and the late Professors David Galton, Sir John Dacie and John Goldman. I also met so many other Haematologists from all five continents. Several of them remained friends for life. It was a cauldron of research, ideas, success in clinical and biological findings! I treasured the time I spent here because you could have a coffee with the giants of clinical haematology in the UK!

Almost the best in the world came from or passed through Hammersmith for the next 40 years, including among many others, Prof Atul Mehta, Prof Mile Laffan, and the late Prof David Swirsky, Prof Sean Whittaker, Prof Jane Apperley, who later became Head of the Department, just to mention a few. I would refer to a British Journal of Haematology review by Professor Victor Hoffbrand in 2003 for a list of the milestones in the history of this Unit.

My future got even better when Prof Lucio Luzzatto arranged my 3-year post-doctoral position (1988-1991) with Prof Terry Rabbitts in Cambridge at the Laboratory of Molecular Biology (LMB). At the time, Prof Cesar Milstein, one of my PhD examiners, was the director of the Unit, and I regularly met him in the corridors of the LMB Institute. He reminded me about ‘misquoting’ one of his papers in my PhD. But I was so happy to be there, I could forgive him! The time in Cambridge was a dream because you were constantly walking never more than two metres away from a Nobel prize winner. What was I doing there! That period helped me to consolidate my knowledge in molecular biology and set the foundations of my research in animal models for leukaemia and translational research in haematology for the rest of my career. And it was in Cambridge where I met my future husband, Nick, who, however, always says: “I know I have always come second in your heart, after your love for science”! But in spite of that, we are still together 34 years later!

Sharing expertise around the world

In 1991, I planned to return to the Hammersmith but, unfortunately, the MRC decided otherwise. I then had to apply where a job was available. I landed at the Royal Free Hospital in Hampstead – from Wormwood Scrubs to Hampstead Heath, how could I complain! I did not. I was there from 1991 to 2007. Something must have been good! I was received with open arms by Prof Victor Hoffbrand and worked with him directly throughout, setting up the highly effective Molecular Diagnostic Laboratory. We established some of the most rewarding programmes for monitoring minimal residual disease in haematological malignancies in collaborations with many laboratories in the UK and worldwide. It was this work that took me all over the world to lecture, from Europe to the USA, Australia and Hong Kong. I had the most successful publication period of my career and enjoyed every moment. Victor was supportive, his guidance, knowledge and fame rubbed off on anyone working with him, and I still feel a privilege to have shared so many years with him and be called his friend.

But then, as someone would say, it was time to close the circle (not really, I never liked that expression! More like: I was ready for a new challenge). I was only 52 and either I was going for it now, or I would have needed a Zimmer frame to move to my next working place. And the Haematology Department at the Imperial College London, Hammersmith Campus needed a Molecular Biologist to run their diagnostic service. It was a new dream come true!

Thanks to Prof Jane Apperley for thinking of me and to Prof Steve Bloom for financing the finding the financial support for the post and the laboratory. Thanks to this fortuitous combination of stars, I was asked to make a list of equipment I needed or wanted for the lab. I got everything I asked for, and even more! It was like waking up on Christmas day and finding every present you ever wanted under the tree! I was able to take a couple of my very talented postdocs with me as well, and Dr Gareth Gerrard stayed with me for 10 years. With the support of the NHS (in particular, Anne Bradshaw) and the academic team (led by Prof Apperley), we were able to build (I think) a fantastic laboratory, set up every test we ever wanted, and have great fun as well! The focus was primarily on monitoring CML patients, for which the Department is a centre of excellence Nationally and worldwide. The team at Hammersmith was among the first to replace cytogenetic with molecular milestones for the assessment of CML patients (J Clin Oncol. 2012;30:232-338).

Jane introduced me to Prof Tim Aitman and many of his colleagues, and they all helped to expand from a few tests in haematology to a variety of tests for other specialities in the Department of Medicine and beyond. Some of the collaborators are below, at the opening of the new Molecular Diagnostic Service in G Block, in early 2013. 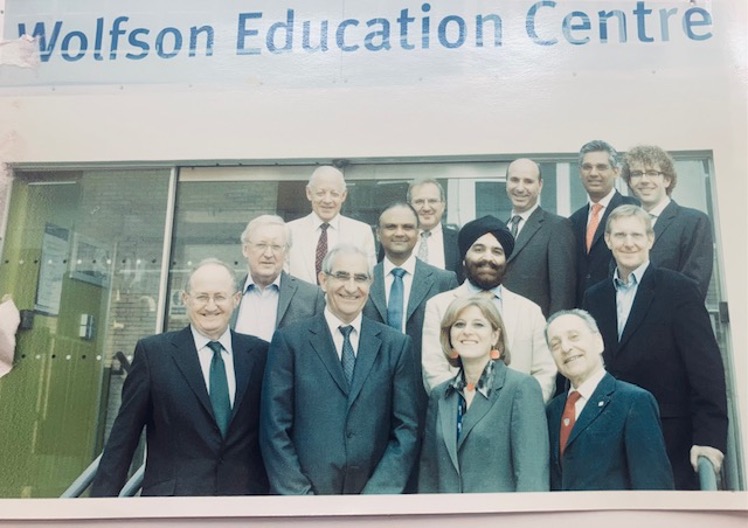 In 2015, I retired from the post of Head of the Molecular Diagnostic Service to take on a different challenge, teaching Molecular Genetics in different courses at Imperial College, from the BSc in Haematology, the Master in Genomic Medicine and the new BSc In Molecular Bioscience. I have enjoyed every lesson and every day! The challenge of interacting with students and feeding their insatiable knowledge has been a blessing. In the last three to four years we have implemented a new teaching approach called flipped classrooms, where students attend classes after they have prepared for the subject to be discussed. It has proved to be a point of no return! It is an engaging, rewarding and enjoyable method of learning and teaching, lots of work, but worth every second. And it is on such a high note I want now to leave! Thanks, Hammersmith and the hundreds of colleagues in Haematology for all the help, support, fun and madness we had!

Welcome to the DoII Staff Blog

Information, updates and stories for staff and students in the Department of Immunology and Inflammation at Imperial College London.

One comment for ““My obituary”: Reflecting on 40 years in haematology | Dr Letizia Foroni”