I attended the Philosophy and Theory of Higher Education Society conference held on 18-20 September 2019 in Leuven, Belgium. The conference focused on ‘Reclaiming study practices’ and followed an alternative format to usual.

The idea of the conference was to provoke thought about the present state and future modalities of those study practices that define university life for both staff and students: academic writing, lectures, academic research, seminars etc. The impetus for such thinking is rooted in the powers (social, economic, political, and cultural) that have laid claims on study practices, including the space, time, bodies and minds involved in their construction. The eventual aims of the conference were to determine whether certain university practices are worth protecting, defending or re-inventing, and if so, how we might (re-)organise them in future.

In order to achieve these aims, the conference consisted of two days: Day 1) Reclaiming study practices; Day 2) Claiming study practices. There were no individual paper presentations. Instead, we received a single booklet containing each attendee’s 1000-word submission that provided relevant material to guide discussions about the conference theme. Having been divided into groups and given allocated ‘study time’ we each read the submissions of those members in our group in near-silence. This method of silent group study itself featured in our later discussions as a study practice worthy of preservation!

Despite not having received much targeted feedback on my research, this format really helped me to place my work within a wider context and to think practically about how it affected the topic at hand. This actually enabled the group to engage with some of my research themes, including the importance of ‘in-between’ spaces and active learning, more meaningfully. I therefore believe this style of conference format has promising potential in other settings, including the Centre.

A note on my submission

My submission began setting the context around Imperial College’s shift toward greater active pedagogy, open-ended curricula and self-directed student workload, given it is the institution I am researching. Whilst these changes are educationally warranted, my claim was that the need for the learner to transition between directed and self-directed forms, and between these more passive and active spaces was a demand that has been overlooked. My reclaim was both a methodology to build an evidence base for better understanding transitional space, and then a suggestion for how careful architectural and timetable intervention can better support and enable transition to both nurture and better understand active styles of learning. The group provided some useful feedback on my submission, including that some had considered ‘in-between’ space as strictly in-between and immeasurable. Others were fond of the idea of modifying physical space and the timetable in order to encourage more serendipitous interaction between students and other members of the learning community in the gaps between timetabled sessions.

Following the silent study sessions, the group reconvened to begin discussing the most important themes. Differences in opinions and perspectives made this phase more difficult than simply reading each other’s work, as we were now required to sacrifice certain views we held as sacrosanct in order to arrive at a group consensus. Each member wrote five post-it notes representing what they felt to be the most important themes arising from their reading and these were placed on a board (see photograph). 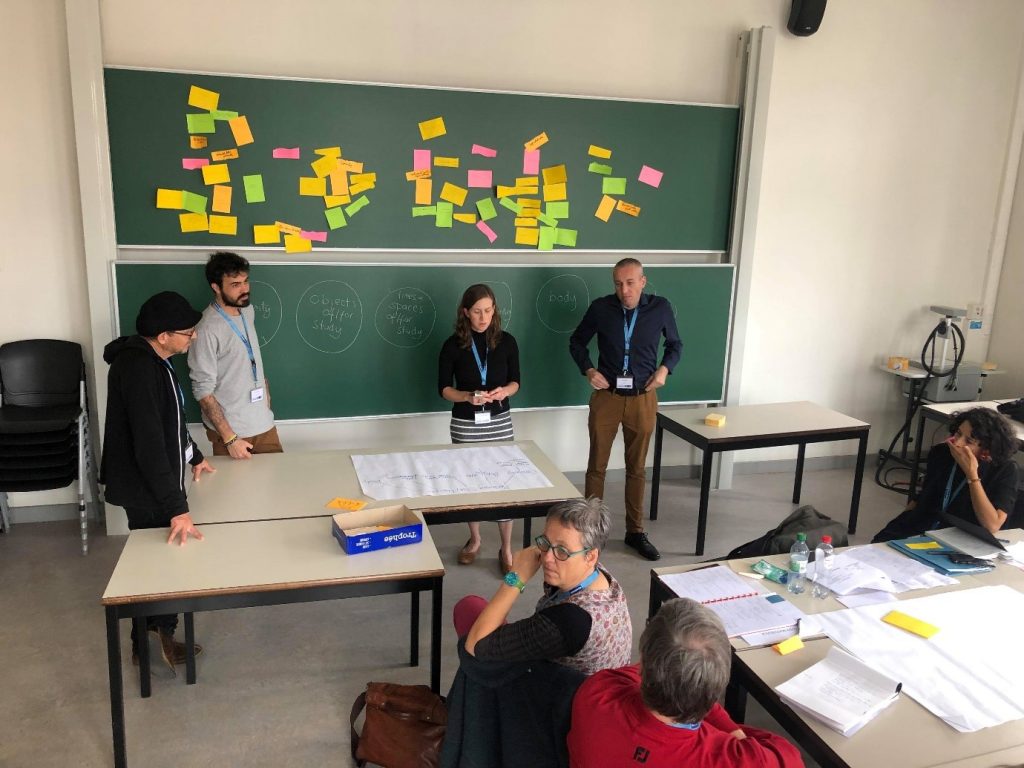 The group then spent some time grouping common themes and had further discussion about what seemed to be the most prominent of those themes. The following claims on study practices proved to be the most important in our group:

The group then discussed which themes and principles might help universities to reclaim study practices gripped by the above claims. The following resulted:

These claims and reclaims were presented as a visual metaphor, the ‘monastic cow’ (see photograph below), which represents learning as a slow process, similar to the process of digestion, and one which should be held as sacred. 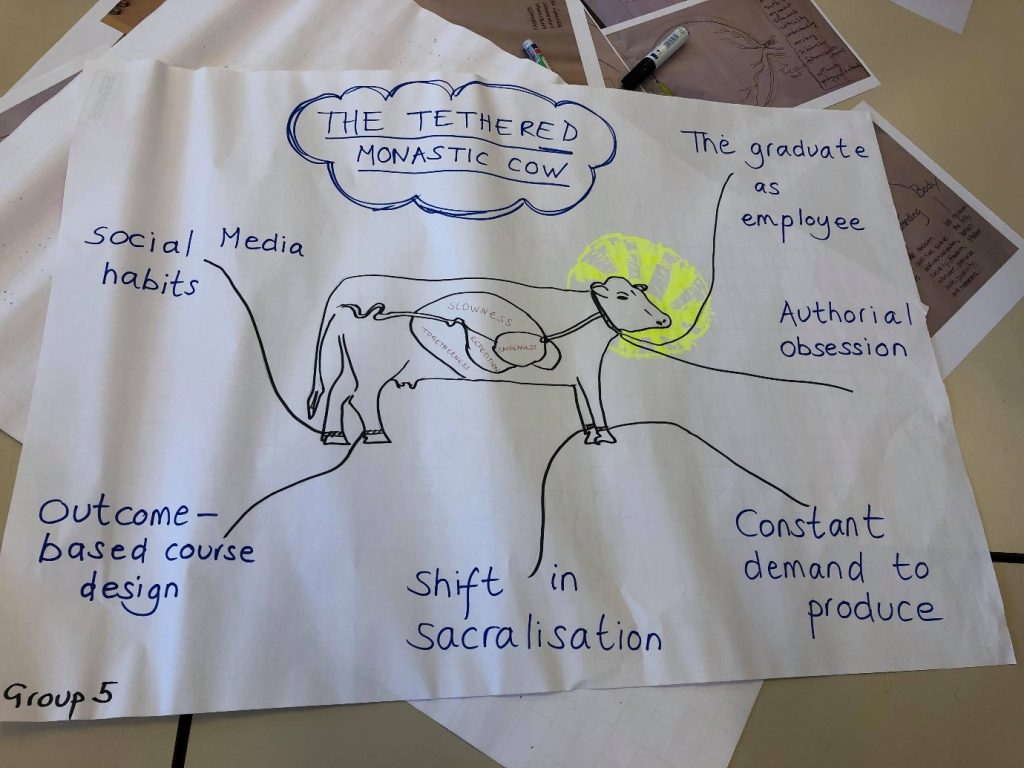 I found the conference useful mainly because it was a time and space to step back and take a critical look at the direction universities are going in. I personally believe Imperial College, among other institutions, need to create time and space for students to escape the pressures of the external world that currently can be educationally counter-productive or even damaging. The keynote presented by Tim Ingold provided extremely insightful elaboration on ‘Building a university for the common good’ by proposing four principles that he feels should guide universities: freedom, trust, education and community. By working against certain undercurrents that govern our society and sector (capitalist forces, marketization), it may be possible for institutions to maintain an environment conducive to these principles.

If you have any questions or comments on the content of this article or relating to my research then feel free to get in touch with me by email.