And what netball has meant to me this year

Although netball was not a new sport to me, playing a sport at university has certainly been a new experience. Imperial College Netball Club (ICUNC) has become one of my favourite aspects of Imperial, and even though, for a while, I almost regretted not taking up a new sport, the last few months have definitely reminded me why I chose netball. For months on end, the repetitive cycle of training on a Thursday and matches on a Monday seemed cruel in the subzero temperatures, however, looking back now, I can see how much we’ve improved, bonded as a team and had a really great time along the way.

For those who aren’t familiar with the sport, netball is a sport played with 7 players on court at a time, three defenders, three attackers and a centre. Each player has a specific role and is only allowed in a designated area, the ball can only be passed up and down the court, so the sport requires good reflexes, agility and speed.

The 5th team’s road to varsity has not been the smoothest. Struggling to find enough players to play each match has sometimes meant turning up with less than seven, but we have never let this dampened our spirits. We’ve all had to learn to be versatile and adapt to changes quickly. A massive highlight of the season that almost sounds like a joke, was a match against RVC with only five players on our team. Not only did this mean having to take out two of the wing positions but due to an entire team of defensive players, I had to try to play goal attack, a position I had barely ever played before and most definitely not in matches. As a GD/WD (yes I know I’m quite short for this position, but jumping works well!) playing the opposite position was utterly confusing but I actually quite enjoyed it and was almost mildly successful at the position! This showed me how no matter what, a little bit of adaptability and quick thinking, combined with encouragement goes such a long way on the netball court.

Through training in the rain, matches in the snow (it was the coldest I’ve ever felt in my life) and commutes to the most remote parts of Greater London, it’s fair to say there has been plenty of team bonding and laughs along the way. Despite not knowing many of my teammates until 6 months ago, its fair to say I definitely have a friend in all of them. It just feels so good to be a part of something like ICUNC, its having a place to go to where nothing else matters than the ball and getting it into the net and achieving it together as a team. It really hasn’t mattered that we haven’t won a game all season because as team we can see how we’ve improved from match to match and nothing is more satisfying than the feeling of stepping off the court knowing you’ve tried your best. 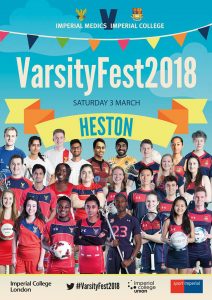 So as the end of season approaches, this Saturday (March 3rd), (Varsity) will see 28 matches between Imperial College and Imperial College Medics, in 11 different sports. It’s going to be a great day of sports and fun, with the Netball 1st team headlining at the end of the day.

From 10am, I will be taking over Imperial College London’s Snapchat and Instagram accounts so you can follow the events of the day there!