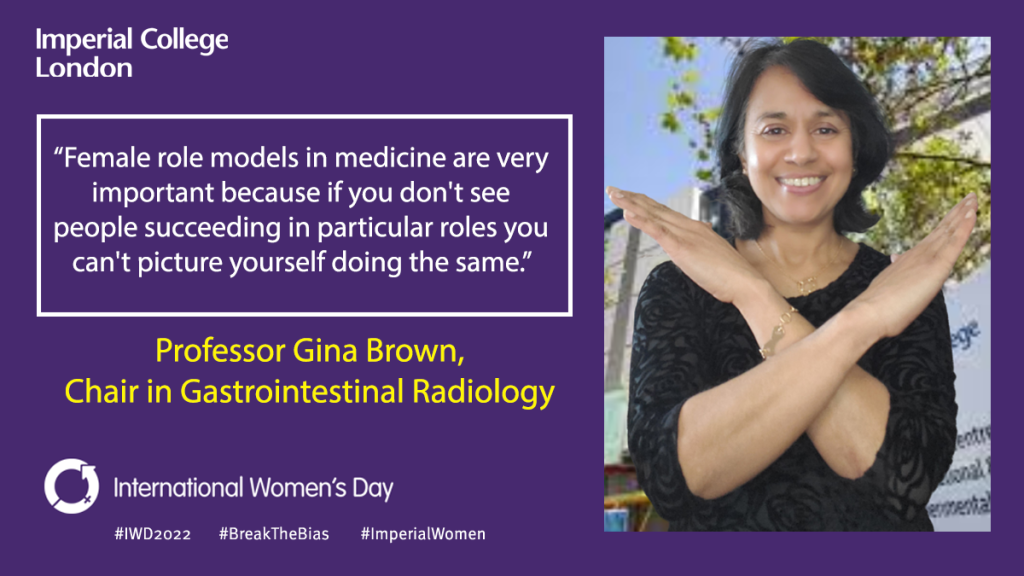 What is your role in the Department of Surgery and Cancer?

I am the Chair in Gastrointestinal Radiology at Imperial. I specialize in GI cancer imaging and my research interests include using imaging to improve how patients’ treatments can be tailored to their individual risk.

Why are you passionate about mentoring and challenging gender bias?

Female role models in medicine are very important because if you don’t see people succeeding in particular roles you can’t picture yourself doing the same.

When I was at medical school in the 80s, I saw confident women hold their own in a very male-dominated environment. When challenged, they wouldn’t get upset or defensive, instead, they would meet it with humor. Seeing this made me feel that things were possible in my future. Despite the challenging environment, I could see they were succeeding, and their actions were slowly changing things for the better.

Have there been any female leaders who’ve helped shape your career? 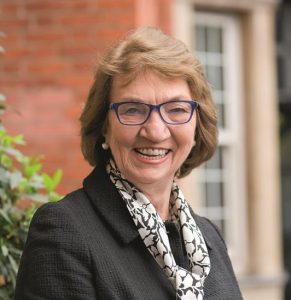 The person who mentored and championed me was Dame Janet Husband, who was the Head of Radiology at the Royal Marsden Hospital when I was a trainee. She believed in me. The thing she did for me, and I’m sure she did for others too, was to tell me “you’ve got talent; you should do research; you’d be good here; I want to give you work to do that will show your talent.” That faith when you don’t feel very confident in yourself is an important thing. Whether it’s correctly placed or misplaced, it doesn’t matter, it helps give you the confidence to succeed.

What piece of advice would you give to someone at the beginning of their career?

The most important thing is to step forward. I think people can often be too accommodating and I think a crucial part of a successful career is to step forward and step up. Finding a mentor or role model is also incredibly important as well, especially during those difficult times when you need a sounding board.

How do we break the bias?

I think that it’s nice that we have female interest groups, but I would also like to see more structure for them rather than a sort of open-ended forum. Our activities should be problem-focused and collective. For instance, I want activities to focus on specific goals like confidence-boosting, improving assertiveness, and how to navigate difficult situations.

When I’m talking to my PhD researchers, who are having a sort of inward battle about whether to pursue research or not, I also try to talk to their partners. You can sometimes see a dynamic is already building, along the lines of “Here is my wife, she’s the mother of my children and you’re asking her to pursue something that she probably doesn’t have time for and will stress us all!” And that can be a very frank statement and a realisation of a social expectation. It can be very hard to overcome that, even in modern marriages and modern families.

I think the way in which Imperial can support that reality, because you can’t change someone’s domestic situation, is to offer flexibility and latitude to the women who are at that point in their career. When they have to be the most competitive, often in their 30s, but they’ve got the least time to do that, the College should say “if you’re going take five years to do your PhD instead of three, that’s all right because we recognise that you’ve got family commitments and that’s not going to affect the metrics for Imperial.” I think this would make a big difference and would offer some of the support needed to help overcome gender biases in academic medicine.

I think the other key issue is the financial constraints and the domestic reality of things like childcare costs. I’ve observed that many of the women that are very academically successful early on in their careers have a very wealthy spouse, so they are less worried about childcare and so on. I think that those sorts of imbalances may need to be addressed in some way in the future. I suppose the challenge is to look at the economic and social barriers to progressing in academic medicine and stop making those disadvantages. A lot of that is to do with time.

Do you have a female hero? 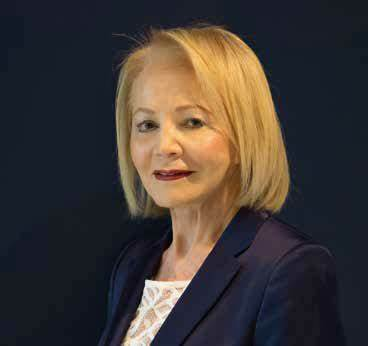 I have a surgical friend in Brazil called Angelita Habr Gama who is probably approaching her 90s now but is still absolutely active and dominant in her profession as a colorectal surgeon in Brazil. I think it’s fair to say that there’s very strong patriarchy in Brazil. Without being aggressive, and with a smile on her face, she disarms everybody. That’s to me is the heroism, because she speaks softly, very politely, and gently corrects whatever misogyny she’s faced. And I look at her and marvel at her ability to do that.

She is someone I greatly admire because she has been opposed, vilified and has had a lot of bad press and doesn’t get upset by it, or she may internally, but outwardly she just forges ahead because she has truth on her side. Now she’s achieved global recognition for all that she’s done, but initially, when she was first doing her research and publishing, people were hostile towards her and her work.

I know you’ve had a long career in medicine, how have you succeeded despite the odds?

I think it’s resilience and stubbornness probably on my part. I think that’s my personality. I’m a little bit stubborn and if I think I’m correct or right I will just keep pursuing what I think I should be doing. It does mean that with rejections I won’t ever stop or give up. Instead, I reflect on how I can improve but I won’t quit if it’s something I believe in. I just keep pursuing it.