For your summer reading and listening pleasure – and curiosity

Term is well and truly over. The undergraduates have dispersed to home and holidays, and for a brief spell (at least for academic staff) attention can turn to other things such as research. But hopefully everyone will have the chance to take break of some sort and time for a little summer reading. Let me therefore be so bold as to make a couple of suggestions of books, articles and podcasts that might illuminate some of the trickier issues of equality, diversity and inclusion.

Atul Gawande, a surgeon, public health leader and one of my favourite authors once wrote: “people talking to people is still the way that norms and standards change.” Gawande was writing (in a truly superb New Yorker article) about how ideas spread in medical practice, but it’s a phrase that has stayed with me and one that also applies to the boundaries that arise because of gender, race, sexuality, disability, class or any other aspect of human experience.

Those boundaries can be hard to navigate, which is why the first-hand perspectives of people from minority groups are so valuable. With that in mind, let me humbly point you to a few pieces that have caught my attention in recent months.

First up, one of my favourite reads from last year was Angela Saini’s Inferior: How science got women wrong and the new research that’s rewriting the story. I reviewed it for the Guardian and was delighted when Angela came to talk about the book at Imperial last autumn.

Also last Autumn and also at Imperial, I first came across Akala, a rapper, author, poet, and political activist, who had been invited to speak about black history by the students’ Caribbean society. He gave a fantastic lecture, brimming with charisma and ideas, and has since published his first book, Natives: Race and Class in the Ruins of Empire, which was reviewed by historian David Olusoga. I haven’t yet read it myself but it’s on my summer list. You can get a sense of the themes of the book and its author from this really thoughtful interview with journalist James O’Brien. There’s a podcast you can download or you can watch the YouTube video below:

Finally, The Economist magazine recently ran a series of articles discussing transgender identity. It was stimulated in part by the opening of a government consultation on reform of the Gender Recognition Act 2004. The consultation is seeking views on how to reform the processes by which trans people can legally change their gender. This is an important but sensitive issue that has been debated at length and with considerable heat on social media. For me the value in the Economist’s approach was that it was open to different voices from both sides of the argument, which touches on issues of the rights of women and trans people. A particularly helpful feature of the series is that in the second week the contributors had a chance to respond to what each of them had written in the first week. It is clear that this remains difficult territory – there seems little prospect of a consensus at the moment – but reading all the articles gave a good sense of the dimensions of the debate.

I am sure there are many other great and important reads on all these various topics. For now I’m sticking to the principle that “less is more”, but if you have suggestions please feel free to email me or to leave a comment.

In case you missed it, yesterday was the very first international day of  LGBTQ+ people in science, technology, engineering, and maths (STEM). The 5th July date was chosen for the geekiest of reasons: it can be written as 5/07 or 7/05 (depending on which side of the Atlantic your are on); in nanometres these are the wavelengths of the colours green and red that feature in rainbow symbol adopted to represent the LGBTQ+ community.

The College celebrated the day by adding rainbow icons to its social media feeds and posted profiles of four of our staff members from our own LGBTQ+ community. Laurence’s profile is below, but thanks also to Giulia, Dan and Ji Young for sharing their experiences; and to Ben, who wrote about why the day matters to him.

"Visibility and openness are most important for our students. I hope to encourage them to embrace diversity, LGBT+ and beyond." #LGBTSTEMDAY #PrideMatters pic.twitter.com/kQgoQ0VzPm

In Nature a moving article by Dr. Jon Freeman, a gay assistant professor at Stanford, described his experiences of isolation with academia and the importance to him of discovering senior LGBTQ+ colleagues who understood what he was going through and gave him hope.

“Just being able to talk science with a more senior researcher who was ‘like me’ was a powerful signal that I had a place in the scientific community.”

The importance of such contacts cannot be under-estimated. So I hope all staff and postgraduate students are aware that the Imperial600 network is open to them. Along with Imperial600, the EDI Centre at the College will be working over the coming months to train a network of allies – non-LGBTQ+ staff who have volunteered to offer understanding and support to LGBTQ+ colleagues. I had my first training session at the LSE earlier this week.

And finally, Imperial will once again be participating in the Pride in London march tomorrow – watch out for us if you’re in town tomorrow. 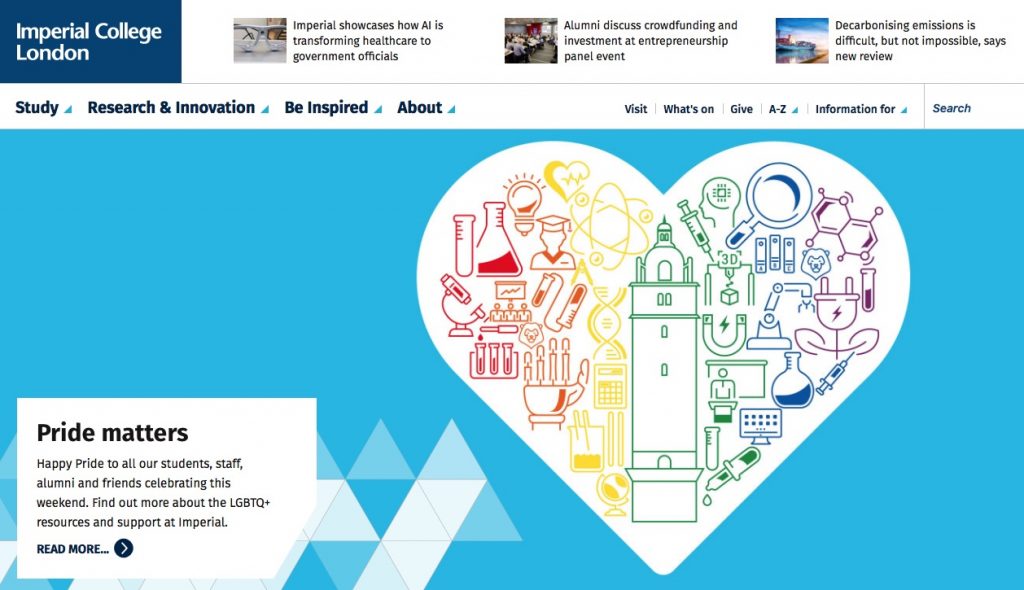