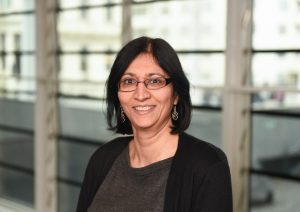 Dr Deesha Chadha OBE is a Senior Strategic Teaching Fellow in Imperial’s Department of Chemical Engineering with a career in higher education spanning over 20 years.

In 2020 she was awarded an OBE for services to faith communities in her voluntary role as Co-Chair of the Faiths Forum for London, a group empowering religious communities to work together towards a better London.

Dr Chadha initially studied Chemical Engineering at the University of Surrey where she met Dr David Faraday who became her inspiration in chemical engineering, encouraging her to get involved in volunteering opportunities alongside studying.

According to Dr Chadha, “Dr Faraday’s support was even more valuable given that I’m an ethnic minority woman who studied chemical engineering over twenty years ago – when it was an even more male-dominated subject.”

By the time she finished her undergraduate studies she had served on the Chemical Engineering Society, acted as the Department Student Representative to the Academic Board in Engineering and won the Surrey University Chemical Engineering Reunion Prize for exceptional personal and professional development. She graduated with a Bachelor of Engineering in 1998.

In 2005, she gained a PhD in engineering education. Following this, she held various leadership roles including Programme Director for the Postgraduate Certificate in Academic Practice at King’s College London from 2013 to 2016.

Dr Chadha has also been a National Assessor for the Queen’s Awards for Voluntary Service for over two years.

She has served as a member of the National Executive Committee of the Hindu Forum of Britain for over 10 years and in 2019 was elected Co-Chair of the Faiths Forum for London.

Reflecting on her OBE, Dr Chadha said: “Now more than ever, faith and community leaders are called upon to support their communities in getting through this crisis. It has been great to use my position with the Faiths Forum for London to connect with the Chaplaincy at Imperial. For example, we recently organised student podcasts where students discussed AI and faith.”

“As a woman from an ethnic minority background, I don’t think we are very high on the pecking order and I would love to use this honour as leverage to promote the achievements and work of other ethnic minority women.”

Her advice to any aspiring female engineers is: “believe in yourself, challenge yourself, and make the most of any opportunities available to you”.