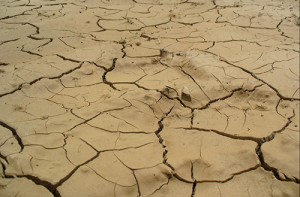 As a researcher, I had an opportunity to contribute to a table in one of the chapters and have read through each of the 30 chapters of the Working Group II report (on Impacts, Adaptation, and Vulnerability).  Here is my personal take on seven of the most frightening findings from the WG2 report:

The health chapter explains how climate change will affect global health, including direct impacts of heat stress, drought and extreme events, as well as indirect impacts on nutrition and mental health.

One extremely frightening direct effect could actually be from CO2 itself. A recent study found indoor  CO2 levels of 1000ppm (parts per million) can impair human decision-making performance and cognition.  Current atmospheric levels are 400ppm and rising fast.  Some scenarios have us reaching these levels by 2100. If these effects are confirmed, how will we be able to adapt?

One particularly frightening aspect of climate change is its impact on children.  This is a long term problem with implications for future generations.

Also, children, young people and the elderly are at increased risk of climate-related injury and illness. One study in Nepal found flood-related mortality was twice as high for girls as for women, and was higher for boys than men. Children are more vulnerable to impacts like malaria and diarrhoea for physiological reasons, and also more vulnerable to heat stress.

The coastal chapter explains carbonate reef structures would degrade under a scenario of 2°C by 2050-2100.  Increasing levels of  atmospheric  CO2 also cause the ocean to acidify, causing coral reefs to lose their structural integrity.  The North Atlantic and North Pacific are already becoming more acidic.

Coral reefs are important for biodiversity and account for 20-25% of fish caught in developing countries, as well as housing many other marine creatures.  Skeletal “dissolution” is expected to be widespread by 2100. The most frightening thing of all is that these are the impacts under business-as-usual scenarios.  Average global temperature has already risen by 0.8°C since 1880. Global leaders have only agreed to limit warming to 2°C of warming, a target they are currently missing.

Over 70% of agriculture is rain-fed, so agriculture and food security are highly sensitive to changes in rainfall.  Higher temperatures have an impact on crop yields.  Climate change will affect rivers and oceans as well. Some scenarios forecast widespread fish extinctions in rivers. In one study where data was available, as much as 75% of local fish biodiversity would be ‘headed toward extinction’ by 2070 due to climate change, particularly in tropical areas.

Food price rises triggered by climate shocks disproportionately affect the poor who tend to spend a higher proportion of their income on food.

Climate change will impact on international trade in both physical and value terms. For example, coffee is a major traded beverage which is sensitive to climate variability. Coffee crops will be forced to move to higher altitudes where they are available. Millions of rural people rely on coffee, tea and cocoa production.

The economic costs are expected to be huge.  For example, in Ethiopia, agricultural decline is projected to cause a 10% decline in GDP against benchmark levels.  While trade can help countries to adapt, for example by importing food, deficits may have to be met by food aid.

High food prices can impact on socio-political stability.  For example, 14 countries in Africa experienced food riots in 2008 during the 2008-9 price spike.

People can also be displaced by extreme weather events. But migrants do not necessarily reach safety; with new migrants more at risk at destinations in cities. Sea level rise is projected to lead to permanent displacement as coastal areas become uninhabitable.   Under 2 metres of sea level rise, 187 million people are expected to be displaced.

Chapter 12 also examines research on links between climate change and armed conflict. Many of the factors that increase the risk of civil war are sensitive to climate change. US Military experts recently called climate change “a catalyst for conflict”.

Finally, there are limits to adaptation.  This means we cannot adapt to many of these impacts. For example, 31 Native Alaskan villages are facing “imminent threats” due to coastal erosion and several decided to relocate – but their ability to relocate also depends on financial support.  Examples of ‘hard’ limits to adaptation include water supply in fossil aquifers, limits to retreat on islands, and loss of genetic diversity.  In such cases climate change will lead to irreversible losses.

There are various ‘tipping points’ in the earth system which, if crossed, could trigger rapid and catastrophic climate change. Only mitigation can avoid such risks.  Unfortunately little is known about where exactly these ‘thresholds’ lie, making the risks even more difficult to manage.

The limits to adaptation explain why global emission reduction is so vital for humanity.  3-4 degrees of warming would be much more difficult to adapt to than 2 degrees to and could result in the collapse of systems. Yet current climate pledges leave us heading to a world 3.7 degrees warmer.  The IPCC shows global emissions are still rising rapidly and show no signs of stabilising.  We are entering a radically different world.

However, there are reasons for hope. The UNFCCC negotiations took place again last month in Bonn, with the aim of reaching a global climate deal. There are signs of leadership from the US and China, the worlds’ two biggest emitters, offering renewed hope that collectively we can tackle this problem.