Session one – introducing the digestive system

The big day finally arrived and Grace and I were armed with fancy thinking hats and sparkle. We arrived 30 minutes before the session to get set up, i.e. load the quiz and divvy out the organs. At the last minute (and to save time) we decided to draw around ourselves for the pin the organ on the body game… I’m not sure we anticipated looking quite like crime-scene bodies but at least we could distinguish between our outlines with the addition of my glasses!

At 3.30 pm the children arrived and we were off! Each child was given a lab book, something they could take away with them at the end of our 5 weeks together. The children were quite puzzled by the organs on the tables and really loved the lab books. After introducing ourselves and letting the children introduce themselves, we asked them to come up with team names and to bring their laminated organs down to the floor. Getting down on the floor with the children to complete the pin the organ game turned out to be a really good ice-breaker and provided us with a lot of entertainment. One girl was convinced the appendix was a little eyebrow (complete with demonstration!), and other members of the group thought the liver was the heart or a lung. Unsurprisingly the mouth was the only correctly placed organ! In hindsight, we should have shown the children a picture of a correctly labelled diagram demonstrating how the gastrointestinal system fits in the human body before asking them to figure out where the laminated organs were supposed to go! We definitely threw them in at the deep end, although they still managed to do a great job!

After showing the children where the organs went we tested their knowledge on digestion, microbes, bile and metabolism. The term microbes threw them a little. We asked them how many microbes they thought lived inside us: one boy thought there was only one! The expression on their faces when we told them there were millions was priceless! After giving the children a little bit of background knowledge, we started the ‘Big Science Club Quiz’. The children were great at passing along our jazzy ‘thinking hats’ so that a different child from each team was wearing it for each quiz question. The child wearing the ‘thinking hat’ became the team leader, and had to communicate with other team members, shout out the answer on behalf of their team and then stand in front of the class and read our ‘fun fact’ if their answer was correct. This meant that every child, particularly those who were sometimes overpowered by louder, more confident class members, could get involved and had their chance to speak and be listened to. It was lovely to see the children get so passionately involved and I think the friendly competition between them sparked even more enthusiasm.

With all the shouting, excitement and laughter the hour session went a lot quicker than anticipated. We were initially worried about timings but soon realised that sometimes you can’t do everything and that’s okay. As Niamh put it so eloquently in a thank you email: “… the MOST important thing is that everyone is having fun (you and the children), where there is fun and laughter, there is learning.” We certainly had a lot of fun and learnt a lot, and have plenty to think about for the next outing of the science club.

Read Session one – introducing the digestive system in full

Grace and I offered our services to take charge of the first science club session. We opted for a ‘go-big or go home’ attitude – which to us meant glitter, a bucket-load of enthusiasm and jazz hands. Our first idea of introducing the gastrointestinal (GI) system to the children was to get them to try our own version of pin the tail on the donkey…pin the organ on the body, obviously. This would involve the children being given a set of laminated organs with the aim of identifying where they went on a life-size body. Lesley suggested that we could make this more interactive by getting the children to draw around one of us! Following this ice-breaker, we wanted to then split the children up into two teams so we could see how much they actually knew about the GI system. We had bounced around a couple of ideas about how to do this but after meeting with Niamh, she thought it would be even more exciting for the children to get involved in a “big quiz of the year”. This sparked a rapid trail of thoughts that led to us creating “thinking caps” and golden ticket style envelopes with fun facts in. We wanted to introduce the concept of a thinking hat to 1) ensure only one member from each quiz team could talk and 2) restore some form of order to a group of 9 and 10 year olds.

With our ideas pretty set in stone Grace and I had to think about getting prepped! We thought 10 questions (and 10 organs) would be an appropriate length for a children’s quiz. One evening when we were tackling the drawing and cutting of our organs we realised we’d forgotten to include the stomach as an answer (no biggie just one of the most important parts!!). By 11pm that same evening we thought it would be wise to check whether our organs were actually life size…as you can see we were very successful – take that GCSE art!

In light of Niamh’s suggestions, we also made the quiz more competitive by pairing each answer with a fun fact. The fun fact will be read to the class by a member of the team that gave the winning answer. Deciding what to include in these fun facts was a lot trickier than either of us thought and involved a lot of “fun facts about…” googling and reading the children’s school syllabus to try and think of something age-appropriate. My favourite fact was about the small intestine being 6 metres long and the large intestine only being a metre – Grace and I knew this would impress the children. 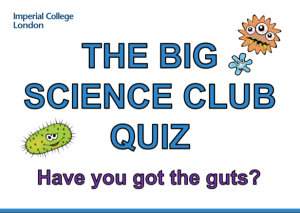 It was important to both of us that the children did a small task at the end of the hour to help them consolidate what they’d learnt from us. We designed a worksheet (see below) that would prompt them to think about the first activity (pin the organ on the body) and the quiz. 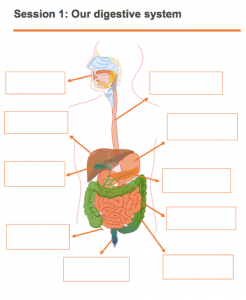 With all of this, we are finally ready to meet the crowds! Wish us luck!!

Read Session one preparations in full

Looking forward to the first week of science club

Preparations are well and truly under way for the first session of our after-school science club. Disposable aprons and gloves, folders, and ingredients for edible poo and farting experiments have been purchased. Grace and Holly are, no doubt, debating whether you can ever have enough glitter, though the fabulousness may have to wait till they’ve found a laminator for their paper organs and bugs. No pressure … only two more days to go!