BEGINNING – Its 3:30pm in Lagos, Nigeria on Friday April 21st, 2017. Pens down and it’s all over. About 102 days of preparation to this very day. Several days mixed heavily with fear, some tears, confusion, uncertainty, late nights, numerous nights spent in the library, juggling different time zones to meet syndicate meetings for group projects, adjusting to school-work-personal-life after obtaining my MSc about 12-years ago, prayers, dreams, aspirations, motivation, struggling to obtain FX from banks to meet tuition payments, etc. Examinations are over. Yes, I made it through the first semester of Financial & Management Accounting and Organizational Behavior. Two courses that I had never taken in my life. It wasn’t easy but through it all my faith strengthened and I was surer than ever that the Global Online MBA program at Imperial College London Business School was the right choice.

IT’S DONE – I was excited that I made it through the first term and my assurance that attending Business School was the right choice! I give God the glory because many times there were those inside voices in my head, mind and heart that created such good reasons why the MBA program was a big mistake. But truth is once you pray about something before you embark on it, there is this way God assures you in the mix of all the confusion and fear that you are indeed making the right decision.

AUTHENTIC – I am as real as you see me. It hasn’t been easy. In fact it has been damn too hard. The non-supportive exchange rate in Nigeria has made sourcing for FOREX very challenging. A majority of my monthly income is ploughed towards tuition payments. Yes you can say that again – It’s not a joke at all!!!…. But I have no regrets. It is a short-term sacrifice that will yield a long-term favorable result. No pain no gain right???? Hmmmm….

LONDON – Such a vibrant city with happy people and great food. It was my first time in more than two decades visiting the city. I arrived January 8th, 2017 to attend the mandatory one week MBA induction program. My arrival date – January 8th, 2017 was my wedding anniversary. On January 9th, 2017 we commenced the induction program – the day my daughter started Reception 2 at her new school. Yes, I missed two important days – my wedding anniversary and my daughter’s first day at her new school. However, I wasn’t sad because I believed the sacrifice I was making in developing myself will reap great rewards. Thankful for superb technology, my ever supportive mother shared pictures and videos of my daughter at her new school on her first day. My presentation on the first day of induction week was connected to my precious daughter. So even if we were far away, with receipt of the pictures and videos I felt so close to her. This is how love really feels…

FAMILY – I have the best family in the whole wide world. They have loved me, preserved and supported me through these past couple of months. They remained my bed-rock. During the many nights I spent in the library preparing for examinations – my fantastic mother (Ann), ever supportive husband (Bayode) and coolest kid sister ever (Omonye) watch my fabulous kids. So my kids didn’t really miss my absence while I was in the library preparing for my examinations.

WAITING – I am excited to see my grades in the next few weeks because it will be a testimony. A testimony I will gladly share with you – yes you reading my blog today!

DREAM – Never ever give up in what you believe. Dreams are free and Dreams become reality with the right formula – faith + hardwork. Miracles happens every day. It is my dream to work for a company that uniquely combines these key areas – fight against reducing poverty, distinct organisation structure and great culture. I will also like to start a Non-Profit Organization. Right now it seems like an enormous road ahead – but with faith and hardwork backed by an MBA degree from Imperial College; I’m pretty sure employers will be delighted to have me as an employee…. Hehehehhehehehe….

One last thing – I am not a writer. Infact I am a more quantitative person but something has moved me to start this blog. And I am happy I did. It’s kinda long overdue!

Stay tuned for Term 2. I will be back to share my experience! Thanks for stopping by and feel free to leave a comment…… 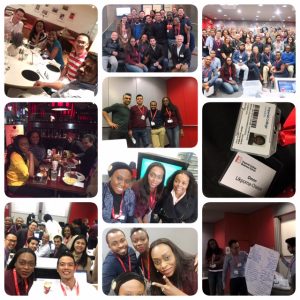