…which leaves you at the mercy of your ugly webcam. Here’s how to avoid its evil trickery. 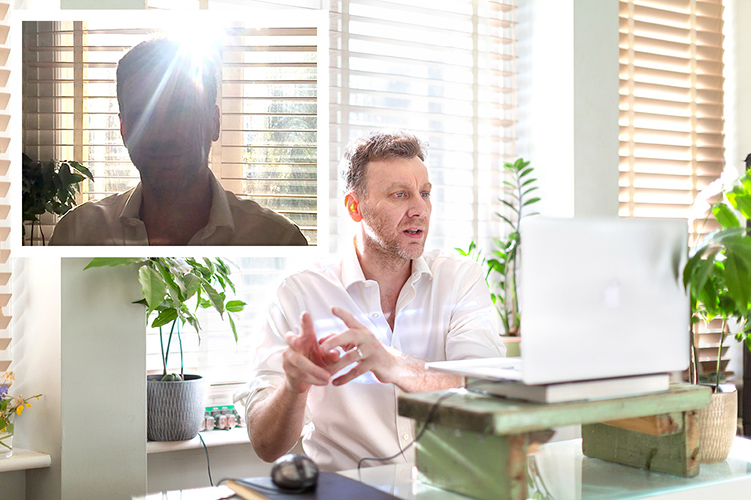 The first is perhaps the most common webcam situation we encounter: the perfectly exposed background of the caller’s garden out the window, while their own face is in silhouette.

The inset picture in the image above is what the webcam is seeing in this picture – see how it differs to how we see the room? This is because it automatically adjusts its exposure to the strongest predominant light source in the frame: the brightly lit scene behind me.

If you can avoid it, never have a window behind you on a video call (however nice the view!). It’s best to move to an angle, or a different position altogether. Preferably you want your light source in front of you and your background to be roughly as bright as your face.

If you cannot move, close the blind or curtains enough to reduce the contrast. It’s unlikely that you have a lamp as bright as the sun to illuminate your face, however a reflector, such as a full length mirror from your bedroom placed behind the camera in front of you, will work to bounce enough light back onto your face. 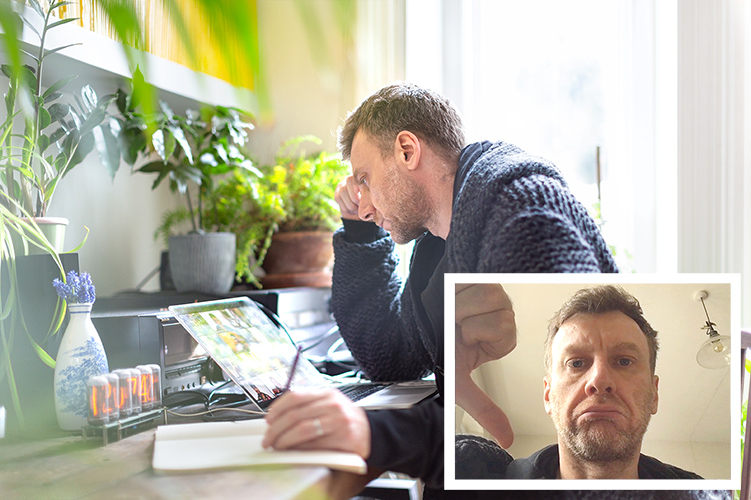 So, we’ve moved to a location with more neutral light, but stumbled into the second most common mistake. The laptop is too low, so on camera we appear to be looming over the person we’re speaking to. Not only that, but we’ve given them a very unflattering view of ourselves, squashing all the skin under our jaw into our neck, while advertising the contents of our nose. 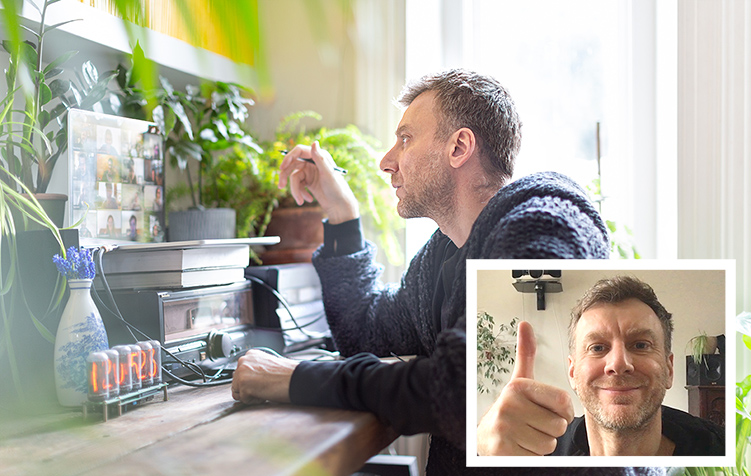 This is the simplest to fix and is instantly much more flattering, so there’s no excuse not to do it and look your best!

Raise the laptop so the camera is at eye level. Back it up a bit too, so there’s a bit of room around your face and your upper body, which will also save your face from being distorted by the webcam. It’s also much more pleasant for other person not to be spoken down to, while giving you a keener jawline into the bargain! 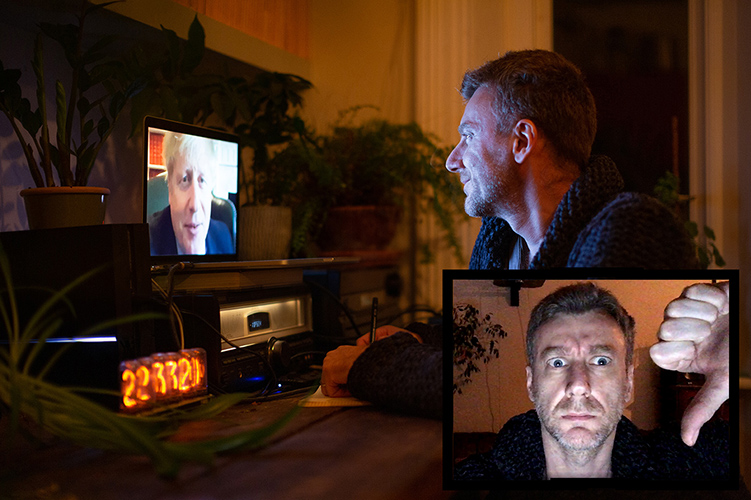 We’ve all seen this one – it’s dark now and the brightest thing in the room is the laptop screen, which is right in front of your face (and if you haven’t followed the advice above, it’s also slightly below your face). This light is incredibly unflattering – as you can see from the inset webcam grab from this picture – and you really want to avoid it.

Introduce more light to overpower the light from the screen before you lose any more self esteem. 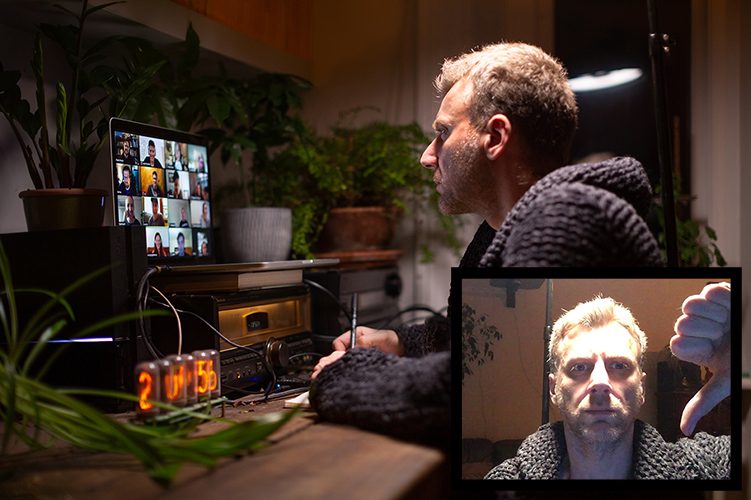 Unfortunately, adding more light might introduce a new problem, especially if you live in a new-build flat, which often have those small – but bright – lights (the type which only used to appear in kitchens) set into the ceiling. Being top-lit by a sharp light is equally awful: it highlights the nose and gives you big black bags under the eyes – webcams have a very low dynamic range, which means they struggle in high-contrast light which exaggerates the problem. Plus you now look evil.

Move back from the beam of light so it’s not on your face if you can. Introduce a different light if you can’t. 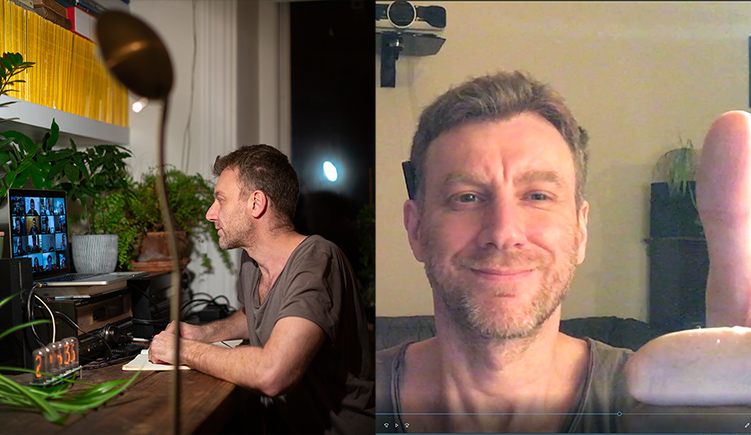 Here, to fix the problem I’ve simply pulled up a floor lamp (pictured in the foreground of the photo above) and turned off the light from above. I’ve angled the lamp to bounce light back off the books in front of me to give a more even and gentle light, which is far preferable to shining it directly onto my face (remember how webcams struggle with dynamic range and high contrast).

It’s not exactly studio light, but it’s easy and available, and a thousand times better than the Vampire or Movie Villain. 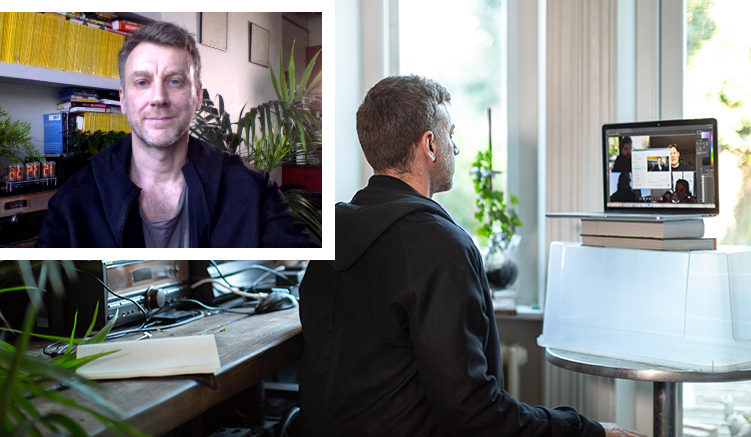 Don’t be afraid to turn around either. You’ll notice behind me that when I’m sat at my table, the background is quite drab in the webcam examples above in this post. On a special occasion, I can spin around and use the far prettier table and bookshelf as a backdrop.

The people on the call will never know I’m sitting in front of a laptop sat on some books on top of a plastic box, resting on a patio table – they just see me with a nice background. 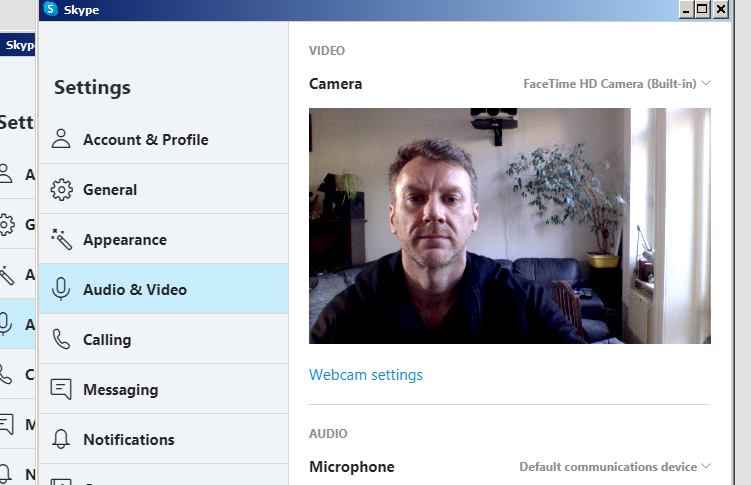 Always check your video before you start, most apps enable you to do this via the settings tab. The photo above shows the settings for Skype, which I used for the webcam shots and setting up the scenarios for this post. Don’t forget to take special care to check your background, we can all see it! 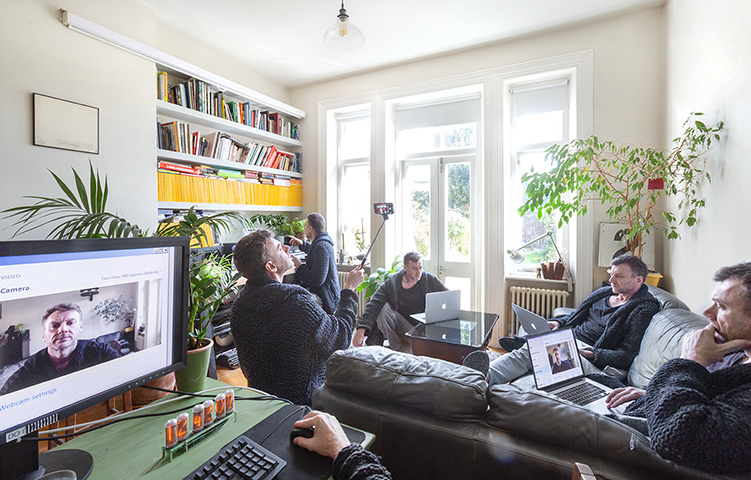 Learn more about setting up your webcam for video conferencing