In 2016 Imperial College London, in partnership with the UK Department of Health, launched the first Ministerial Summit for Patient Safety. The inaugural Summit attracted considerable attention with speeches from UK Health Secretary Rt Hon Jeremy Hunt and the former Director of the WHO Margaret Chan who initiated a worldwide Patient Safety Day.

Two years on and the Summit has achieved enormous international success. It has been held in 3 countries – the UK, Germany and Japan – and in its third iteration attracted delegates from over 40 countries. 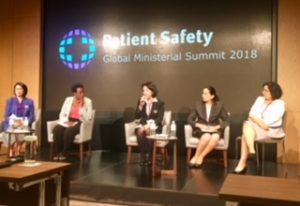 During the most recent Patient Safety Ministerial summit in Tokyo, Japan on May 13-14th, ministers renewed their commitment to patient safety, while other expressed a newly found appreciation for the importance of this topic within their health systems. Further to the ministerial endorsements for safer care, global experts in patient safety also presented their work and demonstrated the emerging priorities for safety.

One such threat that Professor Darzi highlighted was that of cyber security. As patients care records and personal data are increasingly stored in electronic and even cloud-based systems, the role of cyber security to patients is becoming increasingly paramount. Following high-profile failings of cyber security in the NHS last year, it was important to note the relevance of this area to a global patient safety audience. Furthermore, the PSTRC plans to stem the tide of this looming thread and work closely with colleagues in IT and digital health to understand the patient harm caused by cyber security failings and how to prevent it.

In addition to threats to patient safety, the Summit had a distinctly upbeat sentiment to it. Professor Jeffrey Braithwaite from Australia captured this sentiment in his articulation of Safety 2 the new paradigm for viewing patient safety from the perspective of learning from best-practice rather than focusing on mistakes. He explained how other industries look to the positive to learn and grow, an approach that can be forgotten in patient safety. The PSTRC endeavours to embrace this approach and has put in motion programmes to work with our Trust and clinical colleagues to recognise and harness success.

Most striking was the undercurrent of patient involvement throughout the Summit. Nearly every expert and minister who spoke explained their techniques for working in partnership with patients to develop safer, more patient-centric systems of care. At the PSTRC we appreciate how pervasive this trend has become and will look to the examples of other experts and systems to learn new and innovative way to work with patients. Patient involvement is central to the goals of the PSTRC and it is clear from the ministerial summit that it is becoming synonymous with effective patient safety work globally.

As we move towards the next Patient Safety Ministerial Summit in a year’s time, the PSTRC will match the commitment shown be these ministers to improve patient safety globally, will head advice regarding emerging threats to patient safety and will work in a more positive, patient-centric way to achieve cultures of safety within the NHS.