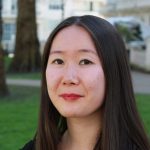 A large proportion of things we use every day have had to have travelled long distances to reach us. Be it fruits and vegetables grown in Spain or South Africa or electronics and textiles made in Asia, the UK is a large importer of goods from afar. The majority of goods are transported to the UK in container ships or freight trucks. While the transportation of goods is essential for maintaining current living standards and quality of life, the impact of importing things from other countries has a high impact on climate change and air quality.

Both the international shipping industry and global road freight sector contributed 2.6% and 7%, respectively, towards total global greenhouse gas emissions in 2015 and 13% and 17%, respectively, to nitrogen oxides (NOx) emissions. The emissions from both sectors are currently at levels higher than they were 20 years ago, thanks mostly to the increase in globalisation, cheap productions (food, clothing, electronics) and disposable income but have remained stable since 2010. However, this has led to both sectors being large sources of emissions. The main cause for emissions is the dependence of fossil fuels; heavy fuel oil is the primary fuel in shipping while diesel is the main fuel used in heavy goods vehicles (HGVs) in the freight sector.

So how can we reduce emissions from the heavy goods transport sector?

The use of alternative fuels in both sectors could produce significant reductions in emissions and help countries meet targets for both climate change and air quality. The use of alternative fuels will become increasingly important as the UK and other countries have pledged to ban the sales of new-build fossil fuel powered vehicles. Such measures have been implemented as decarbonising and cutting air pollutant emissions from the transports sector is difficult because of the dependence on fossil fuels. Natural gas, despite being a fossil fuel, has been proposed as an option for transitioning shipping and HGVs to zero emission as it produces 25% less CO2 upon combustion than oil derived fuels. 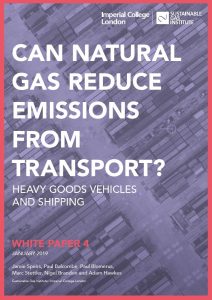 We, at the Sustainable Gas Institute, have recently published a White Paper “Can natural gas reduce emissions from transport: Heavy goods vehicles and shipping”. The extensive report examined the current evidence on the role of natural gas in reducing emissions in the sector. The main finding was that fuel switching from oil derived fuels to natural gas (as compressed natural gas (CNG) or liquefied natural gas (LNG)) could offers emissions reductions in climate change and improvements in air quality (by reducing NOx emissions). Switching from current fuels to natural gas showed a reduction in greenhouse gas emissions of 10% in shipping while there was a 16% reduction for HGVs. Reductions in emissions of NOx and particulate matter (PM) could also be achieved but there is a trade-off, as natural gas ships and HGVs have higher emissions in methane, a greenhouse gas 34 times more potent than CO2. Natural gas-powered trucks also have higher carbon monoxide (CO) emissions than their diesel counterparts, which has a significant effect on human health.

Other potential alternative fuels for ships and HGVs such as biofuels and electricity (batteries) were also investigated in White Paper 4. While the  literature is more scant, studies have found that non-fossil fuel options offer reductions in the impact to climate change and air quality but there is greater uncertainty, because of factors such as the feedstock used and electric grid mix used for charging. Currently natural gas and biofuels have the biggest potential for replacing diesel in trucks; in 2017 Waitrose launched its bio-CNG HGV fleet and in total have 35 trucks. However, as vehicle emission standards become tighter, zero tailpipe emission trucks may play a more important role in meeting emission targets. In 2018, Tesla announced their prototype electric Semi truck, which is expected to go into commercial production in the latter half of 2019. Also, in 2018, Toyota announced they are trialling a hydrogen fuel cell HGV (powered using their Mirai hydrogen fuel cell technology).

While there are alternative fuels and technologies available for reducing emissions from shipping and road freighting, the decision on which fuel/technology will replace fuel oil and diesel in the future is largely down to regulatory and economic decisions. Both sectors have emission targets which must be met. For shipping the International Maritime Organisation’s (IMO) Environment Protection Committee have set a target to reduce shipping emissions to at least 50% of 2008 levels by 2050, while for HGVs (in Europe) the EURO VI applies. This is a standard that defines the acceptable limits for exhaust emissions of new vehicles sold in the European Union and EEA member states. In addition, national emission targets are also applicable to both shipping and HGVs, for example for the UK to meets its fifth carbon budget, greenhouse gas emissions from road transport must reduce to 54% of 2010 level by 2030. The emission targets are the main driver for developments in fuels and technologies to reduce emissions; for trucks, any vehicle of which exceeds the EURO VI limits is deemed not road worthy.

The choice of which fuels/technologies are used is largely driven by costs. The White Paper found that natural gas could offer economic incentives over diesel and heavy fuel oil. While the capital cost of non-diesel/heavy fuel oil trucks and ships is higher, the lower fuel costs incurred from the alternative fuels suggests that fleet operators will recover the higher upfront cost through fuel cost savings. However, fuel taxes and tariffs could affect the economic favourability, as currently taxes and duties applied to diesel are higher than those applied to CNG and LNG. In the future, tax and duty applied to CNG and LNG may increase to make up for the drop in tax revenue from decreased diesel consumption.

The future of heavy goods transport and international shipping will undoubtedly continue to play an important role meeting consumer needs but the technology and fuels used will change. The White Paper has highlighted the key benefits and challenges of natural gas and other fuels in international shipping and road freighting.

Find out more about the work of the Sustainable Gas Institute.