Earlier during the week starting on 15 February, we learned that more than 15 million people in the UK have now received their first dose of a COVID-19 vaccine, including more than 90% of people aged 75 and over. All residents of care homes have also now been offered a vaccination. This is excellent news and means that the groups that for the vast majority of COVID-19 deaths have now been immunised.

We will start to see the effects of vaccination in the coming weeks once enough time has elapsed for people to develop post-vaccination immunity. In particular, this should result in a reduced burden on the NHS as well as a lower death rate. But although we can be proud about what the vaccination achieved, we also need to remember that the programme is a marathon and not a sprint. There is a lot more work to do yet to complete the programme.

As well as continuing to offer first doses of vaccine to people, in April we will need to start offering the delayed second doses of vaccine, which will substantially increase the workload generated by the vaccination programme and place greater demands on NHS vaccination teams. We have also thus far been vaccinating the groups where “vaccine hesitancy” is generally low, such as the elderly and health professionals. As the figure below shows, from the UK Office for National Staistics, we will now start to vaccinate younger people, among whom vaccine hesitancy is at a much higher level than among older people. 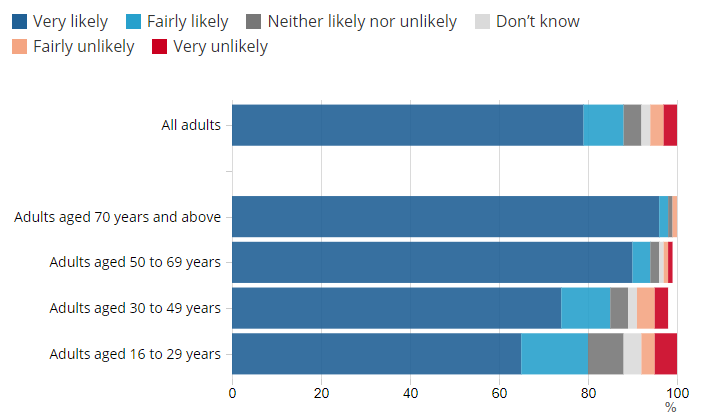 Vaccine hestitancy is also more common in Black and other minority ethnic groups, as shown below, in a figure also from the UK Office for National Statistics. These groups are at higher risk of infection, severe disease and death. Hence, it is essential that vaccine hesitancy is also addressed in ethnic minority groups through sustained engagement with communities. 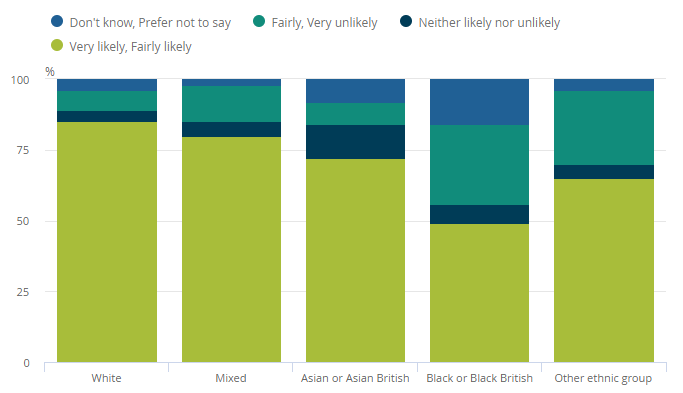 It’s also possible that people will need additional “booster” doses of vaccine at some point to counteract the effects of decreasing vaccine-generated immunity and to deal with new variants of SARS-CoV-2 amongst which current vaccines may be less effective. To help develop these modified vaccines, we will need continued research and it’s essential that members of the public sign up to take part in these projects; in particular, older people and people from ethnic minority groups, both of whom are often under-represented in trials.

We have made great progress in developing vaccines and implementing a vaccination programme. Congratulations to all for this; including industry, universities, government, the NHS and the public. But we are only at the start of this programme. We will need a sustainable, long-term vaccine infrastructure that will require investment and staffing, as well as continuing to update our vaccines to deal with new variants of SARS-CoV-2 if current vaccines are not fully effective against them.

THIS ARTICLE WAS UPDATED ON 17 FEBRUARY 2021: Over 15 million people in the UK have now received at least one dose of Covid-19 vaccine. The challenge will be to maintain this pace when we start giving second doses of vaccine to this group later in March, whilst also giving other target groups their first dose.