Working in collaboration with:  Dr Kirsty Alderton and Dr Frederico Magalhaes who offered mental health support for these focus groups.

There is a current lack of effective treatments for anorexia nervosa (an eating disorder characterised by weight loss, difficulties maintaining weight, and often a preoccupation with one’s own body weight and shape). With fewer than half of those diagnosed with anorexia making a full recovery, there is a desperate need for new treatment avenues to be explored. There are now many studies showing that psilocybin (the active component of “magic mushrooms”) may be effective in treating many mental health conditions, and so the main purpose of our research is to test whether psilocybin therapy is an acceptable and effective treatment for anorexia. Our clinical trial testing psilocybin in those experiencing anorexia is due to start in April 2021.

We incorporated public involvement into our clinical trial design by holding two online focus groups with two different groups of individuals with lived experience of anorexia. Each focus group was then followed by an optional one-to-one call with the lead researcher (Meg Spriggs). In the focus groups, attendees were encouraged to develop ideas collaboratively, while the one-to-one calls gave each attendee additional space to share more personal or sensitive reflections with the researcher.

Current treatments for anorexia nervosa have little success and high drop-out rates. Those with anorexia often report feeling misunderstood and that their individual needs are not met in treatment. Both individuals with anorexia and clinicians agree that greater collaboration would help reduce drop-out from treatment programmes and be more engaging for those going through treatment. As such, the aim of this public involvement was to obtain feedback from individuals at various stages of recovery from anorexia about the design and running of the trial so that we can better meet the needs of future trial participants. Specifically, we wanted to:

1) identify any common concerns among individuals with anorexia about our trial design;

2) explore common barriers that individuals with anorexia face in engaging with treatment/research; and

3) identify practical ways that each of these concerns could be addressed.

Who did you involve and how did you find the appropriate people?

We felt it was important to speak to people with direct experience of anorexia. This is because it is a condition that is commonly misunderstood, and where treatment can itself be a difficult or traumatic experience. One of our attendees reported that during previous treatment she felt “like an animal backed into a cage”, while another reflected that “there is so much potential in just meeting the human being that is in front of you”. Therefore, we want to ensure that we incorporate the voices of individuals with anorexia into the design of our trial.

Attendees were recruited through advertisements on social media using a poster. On reflection, it may have been beneficial to advertise through other means that may have been more accessible to seldom heard populations because the attendees were not very diverse in their backgrounds. We will take this reflection forward into future public involvement for this and other trials in our centre.

The two focus groups (which were with different groups of attendees) were held at different times of the day to increase accessibility and the likelihood that at least one of the times would be suitable for most people (one in the morning, one in the evening). The one-to-one calls were then held at a time that was convenient for the attendee. All attendees were provided with an information document before the focus group which contained background information, the structure of the event, and practical instructions such as how to join Zoom. 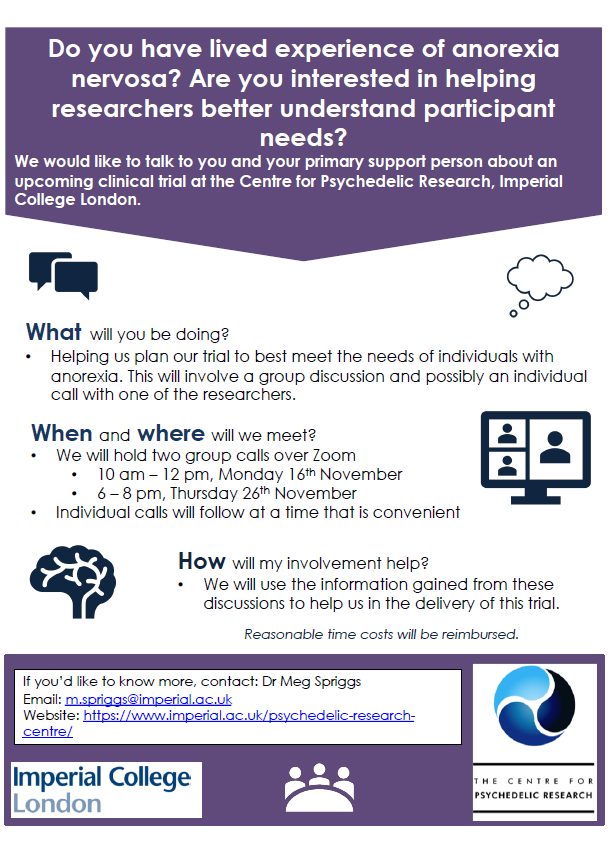 Overall, we did address the three aims of the public involvement (outlined above) and the positive impact of this on the trial is expected to be significant.

1) identify any common concerns among individuals with anorexia about our trial design
The attendees were able to provide us with opinions on our study design from a different perspective, which helped us to identify aspects of the trial that will be most important to future participants. For example, attendees identified that a trusting relationship with the guides (therapist/researchers) would be one of the most important things for them going into a dosing session (the day-long session where participants have their psilocybin experience in a supportive environment and in the presence of their two guides). As one attendee stated, “they know if they want to open their eyes that you will be sitting next to them with a hand to hold. Sometimes that is more important than information on how it works”.

The feedback that we received inspired us to develop new study measures, which we hope will illuminate aspects of treatment that are often overlooked. For example, the focus groups both highlighted the importance of individual differences in the definition of ‘recovery’. All attendees held differing views on what “a life in recovery” meant to them, ranging from practical engagement in daily activities (e.g., “decreased anxiety around food and other people eating”) to relationships with themselves and others (e.g., “I want people to see me for me”). As recovery from anorexia can be a long and challenging journey, it is important that those embarking on the journey have a say in what the endpoint of that journey may look like. Our new study measure has therefore been designed to explore each participant’s individual definition of recovery and how that might change over time. We hope that our newly developed study measures will enable us to explore this in greater detail and will add to the outcome measures we already have. The new measures developed because of these focus groups have been formally added to the study design through an amendment, for which we are awaiting ethical approval.

2&3) explore common barriers that individuals with anorexia face in engaging with treatment/research & identify practical ways that each of these concerns could be addressed
One of the main barriers that was identified by attendees was ambiguity around the impact of the trial on participants’ daily routines. As a result, we have placed greater emphasis on this by specifically exploring this in the “preparation” phase of the trial (series of meetings between the participant and their guides before their first dosing session), where trial participants will work with researchers to develop their own “practical roadmap” for the trial.

Importantly, all the changes that we have implemented in our trial design which were based on the feedback received highlight the “person-centred” approach that was identified by attendees as critical to successful treatment.

Following each focus group, the researchers created a “summary document” which was sent to all attendees for their feedback. The summary included the main themes of the discussions, and an overview of the plan to incorporate this into the trial. Attendees expressed gratitude at having the opportunity to review the outcome of their feedback.

All attendees were provided with optional feedback forms after the focus groups, and overall the response was positive. For example, when asked “what impact do you think that the discussions from this focus group will have on the running of the trial?”, 87.5% of attendees who provided feedback responded with “positive”, with the remaining 12.5% responding with “somewhat positive”. One additional unforeseen positive outcome for attendees was their appreciation of having a space to meet other individuals with anorexia and talk openly about their struggles. 75% of those who provided feedback expressed (without being specifically asked) that the group setting was experienced positively, for example, as cathartic, validating, and/or left them feeling less isolated. As a result, we hope to incorporate a similar opportunity for discussion between participants after completing the trial.

The researchers also found conducting the focus groups to be a positive and motivating experience, as well as a great opportunity to connect with those who will benefit from studies such as this. Being able to talk to people who were at different stages of recovery was an important reminder that recovery can be a long and hard journey but that it is possible, and this trial might be that life-changing experience that is needed for someone to get there. It was encouraging to see that by the end of the focus groups, a number of attendees felt that they would be open to participating in this, or other similar research if it were available to them.

What was the most challenging part of doing Public Involvement and how did you overcome it?

One of our biggest concerns prior to the focus groups was that attendees would find discussing their lived experiences challenging. We took several steps to manage this including 1) setting clear ground rules for the discussion, 2) having a study psychiatrist present for both focus groups who could oversee the discussion and who was available to call attendees following the focus group should this be required, and 3) checking in with all attendees before closing the groups. Overall, while some attendees did find aspects of the focus groups emotionally challenging, the feedback we received was that these situations were managed well and that attendees felt cared for.

We were further concerned that attendees might not actively engage with each other, as a large proportion of our session was dependent on attendee-led discussions. However, after the initial awkwardness of a Zoom call dissipated, the conversations were actively led by attendees as they became more at ease with one and other, knowing that they could all empathise with each other and their shared experience. Where attendees were particularly quiet, the lead researcher would gently encourage their participation, ensuring everyone had an equal opportunity to participate. As mentioned above, attendees actually found the group setting was helpful and a good opportunity to connect with others with shared experience.

In terms of practical advice, we would recommend incorporating interactive activities into sessions. For example, we used Mentimeter to allow attendees to ask questions anonymously if desired and also to create a word cloud of what ‘recovery’ means to them, which received extremely positive reviews in the feedback. Having a team of researchers present so that duties could be shared (e.g., leading the group and taking notes) also helped it all run smoothly.