Jenny’s pre-doctoral fellowship is a partnership fellowship funded by the Stroke Association and the National Institute for Health Research.

I ran my first virtual Patient Public Involvement Group via zoom with 6 attendees. I had previously been involved in public engagement activities in the form of patient stories and feedback but I had not attempted public involvement. I am in the process of developing a follow-up programme of care for people who have had minor strokes. Despite having read extensively on the topic, I knew that I do not have the lived experience of stroke and therefore any follow-up design needed to be fully informed by those with lived experience. I had also previously made the mistake of thinking I knew what the answers were – I had piloted a specific follow-up programme of care and then realised that I had done exactly what we are told not to do …… I had started with what I thought was the solution rather than involving service users from the outset! 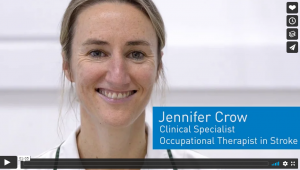 I wanted to bring together people who had had a minor stroke and were living in the community in order to help me understand (from their perspective) what follow up they felt they should have had. I also wanted to establish what had worked well and what could have been improved to prepare them for discharge from hospital.

Who did you involve and how did you find the appropriate people?

In data gathering for my pilot study, I followed up 30 survivors of minor stroke who had been discharged from our hyper acute stroke unit at Charing Cross Hospital in West London. I contacted 13 of the initial pilot study participants via email, inviting them to participate in the follow-up virtual discussion group. I intentionally invited people from different backgrounds, ages and ethnicities. Six people agreed to participate. I was worried that I would not hear back from anyone so was very pleasantly surprised to get such a good response. Those that agreed to attend represented a good age range but I unfortunately only one attendee who was from a minority ethnic background accepted the invitation.

The discussion group attendees received no formal training. I had previously sent them an email thanking them for their participation in the initial pilot study and in that email I included a brief summary of my findings and thoughts and described what the next stages in my research would be.

I sent those interested in attending the discussion group a reminder email a week before the meeting which outlined the 3 questions we would be considering and discussing. I thought this would help the attendees to feel prepared for the meeting. The questions were:

The PPIE group are informing the development of the complex intervention which forms part of my PhD application. This intervention is a multi-component and personalised follow-up programme of care for those who have had minor strokes after they leave the acute setting.  For example, the group highlighted to me that their information needs change over time and therefore the follow-up calls would need to happen at different time points and would need to have a different focus at 2 weeks compared with the call at 6 weeks post discharge. Further planned PPIE work will help me to continue to refine the intervention based on their input as well as gathering input from other stakeholders, for example, acute stakeholders (acute stroke team, consultant, nurses and therapists) and stakeholders from primary care (GP and community therapy team). I applied for, and was successful in receiving a small grant from the Research Design Service (London) Enabling Involvement Fund which meant that I was able to offer the attendees to the PPIE group a small payment for their time which is available for public involvement activities undertaken in advance of a funding application. Given that our meetings are virtual, payment was made by transferring the money straight into the attendee’s account.

What impact did the Public Involvement and/or Engagement have on the people?

The general feedback I received from the attendees was that they enjoyed meeting other people who had had a minor stroke and they were grateful to have the opportunity to give something back to the stroke service. They all agreed to be contacted again for further public involvement and engagement work.

I received some very positive responses from the group attendees:

“it’s been so lovely to see all your lovely faces and actually talk to people face to face that have had the same thing and know that, you know… Sorry, it’s still really early days for me and I knew I was going to cry”

What was the most challenging part of doing Public Involvement and/or Engagement and how did you overcome it?

At the risk of sounding clichéd, it was probably one of the most rewarding things I have done.  It reminded me of why I am doing research and what really matters to patients? It is not about coming up with the most complex research study, it is about listening to what service users are asking for. In my patient population (stroke survivors), they are simply asking for better follow-up care. I am optimistic that with their ongoing input this is a question that research can answer and the results of which can be implemented into care pathways.

I plan to use PPIE throughout the research cycle. I realise that the PPIE group membership may change but this is probably useful to ensure fresh ideas and perspectives. I am now in the process of setting up a second group discussion with the same attendees to present my proposed follow-up programme based on their recommendations to find out if they feel it reflects what they said. I also plan to discuss outcome measures with them in our next meeting, for example: how do we measure that the follow-up programme was successful? I am also planning to ask if one of the attendees would be willing to be part of my study steering committee.

I will be chairing a workshop at the Health Services Research Conference in July 2021 on ‘Improving transitions of care after stroke and TIA’. A former service user has agreed to present at this workshop on the lived experience of poor transitions of care and the impact this has on recovery and life after stroke. She will be presenting together with 2 other researchers and the Stroke Association and will be involved in the group discussion at the end of the workshop. From my perspective, having the patient voice throughout my research process as well as for the dissemination of the findings, increases the likelihood of producing relevant research that will actually lead to changes in clinical practice.