Chemical Engineering PhD student Humera Ansari has worked in both industry and academia, experience which has raised her awareness of some of the challenges female engineers can face. She shares this experience as she believes it’s an important part of ensuring that chemical engineering is an inclusive and diverse environment. 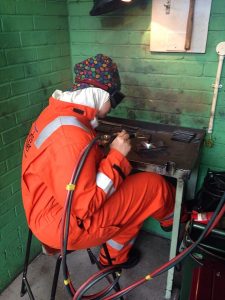 While I was growing up, I always knew I wanted to study science. I just didn’t know whether this was a pure science, engineering or medicine. Looking back, I don’t know what made me choose engineering, but if I really think about it, I can acknowledge that I was quite proud of being good at physics. In my school, it was a subject that was dominated by boys, and it felt great that I could hold my own alongside them.  Unconsciously, this might have been a factor in my decision but, ultimately, I lived in Dubai where the oil and gas industry was booming and changing the landscape of my home, and this pushed me to consider chemical engineering and the energy industry as my final destination.

I love figuring things out. I love being in on the secrets of the universe. I love working out a tough mathematical problem. I love examining a fundamental theory. None of those things for me were ever gender-dependent. I never really believed that all those passions of mine could not be shared by another woman and that someone’s aptitude in those areas depended on their sex. My closest friends growing up were women and they all decided to pursue science in some form or another. It was also probably down to the culture I belong to; ‘good’ careers are considered to be in the sciences, finance etc., and so most of my classmates ended up going in this direction. But I never considered the implication of going into a career dominated by men.

Because I have a degree in chemical engineering, a few years of experience in the oil and gas industry, and am back at university pursuing my PhD, I have some insight into what it is like to work as a female engineer in both industry and academia. I also have many friends and colleagues with whom I discuss some of the challenges that we regularly face, which seem to exist for one reason: our gender. These challenges fall into two categories: those that are external, and those that are internal but are influenced by external activities. While I really enjoy my profession, and so do the women around me, I think it is important to have an open dialogue about some of the issues we experience to help raise awareness of them in the wider academic and engineering communities. My aim in sharing my experience is to encourage other women to do the same so that we can address these problems effectively, and to help engage everyone to ensure engineering is accessible and welcoming to everyone.

Engineering can pose external challenges to female engineers. These are a direct result of the behaviour of others and can seem trivial at first when seen as isolated incidences; but they can become quite wearing over time. For example, sometimes there are assumptions that men hold the positions of authority, while women are simply acting as ‘helpers’. Women’s voices can be ignored during discussions, or their views are not taken seriously by the more experienced crew. Often women have to work harder to prove themselves by dealing with less challenging work before graduating to harder work. Or we can be regularly asked to complete tasks such as planning instead of some of the more hands-on work. The resulting impact can be quite significant on our morale, motivation or even long-term career prospects.

External challenges are powerful because of their tangible result. But they also feed the internal challenges female engineers face, which originate from more systemic problems. As an example, one of my biggest fears is that if I ever make a mistake as a female engineer, I am letting down all women, both engineers and non-engineers. This is a thought shared by many; that we are representing something that is bigger than all of us and that we need to be exceptional in everything that we do, not just average or ‘good’. Even now as I’m writing this, I’m worried that I haven’t covered every issue possible and another female engineer’s experience somewhere is going untold. Logically, I know I can only speak for me and from what I know, but that nagging thought still persists. Additionally, while working as a minority female engineer, I couldn’t help but wonder if I was just part of a quota that was being filled, and worse, whether my colleagues thought the same. Women can also be plagued by the ‘imposter syndrome’, which involves a person not having faith in their own capabilities, questioning themselves, and feeling as someone will ‘find out’ they aren’t suitable for the role. It is often spoken about by women in all positions, whether early on in their career or in more senior roles. Because of this, women can become more risk-averse. For example, I know many women who have occasionally held back from requesting promotions or pay rises even though they might have deserved them.

I hope that by sharing my experiences I have been able shine a light on some of the challenges specific to women in engineering roles. Being an engineer is so fulfilling and my job always entails finding a solution; so it can be quite frustrating that there is no obvious, quick fix to most of these issues. While a lot of positive change has happened over the years and engineering is becoming more welcoming to women, raising awareness in the wider engineering community is an important first step in tackling some of the problems. Building support networks and communities for female engineers to discuss their challenges and share strategies for success is crucial, but we should also acknowledge that everyone in engineering needs to take responsibility for creating a positive working and learning culture that embraces diversity. Having more women in leadership roles is key to making changes from the top down, but there are changes to be made on the ground as well. While we need to make sure young girls and women are encouraged into engineering, the environment also needs to be ready to accept them. Hopefully as more and more women enter the field, attitudes will change – but as individuals we need to be proactive in ensuring this happens.