By Chris Bird, MSc Health Policy student at Imperial College and Project Manager in the System Engagement Programme at NICE 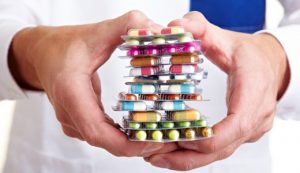 This week marks World Antibiotic Awareness Week, the theme of which is to seek advice from a qualified healthcare professional before taking antibiotics.

It’s a subject brought home to me as I was lucky enough to study my MSc in the very same historic buildings at St Mary’s Hospital where Alexander Fleming first discovered the miracle of penicillin. This was the first ever antibiotic with capabilities to revolutionise world healthcare by eradicating the scourge of gangrene and tuberculosis. Skip forward to today and the availability of effective antimicrobials are estimated to add approximately 20 years to human life expectancy.

AMR describes the process by which microbes become resistant to the common range of antibiotics used in human and animal health to combat infection. Excessive use and inappropriate prescribing of antibiotics, coupled with a lack of research and development into the identification of new antibiotics have combined to produce a significant threat to world population health.

The UK’s Chief Medical Officer (CMO), Dame Sally Davies has referred to AMR as a ‘ticking timebomb’[i] with potential consequences for the nation’s health, so serious that the issue has been logged on the UK’s cross-government national risk register.

Where antibiotics can be bought for human or animal use without a prescription, the emergence and spread of resistance is made worse. Similarly, in countries without standard treatment guidelines, antibiotics are often over-prescribed by health workers and veterinarians and over used by the public.

As the late great U.S President John F. Kennedy once said, “There are risks and costs to action. But they are far less than the long term risks of comfortable inaction”.

Kennedy’s words are as relevant and compelling today as they ever were. If we as a society opt for comfortable inaction and if AMR is left unchecked, a time in the not too distant future could come where the risks of infection are too high to perform treatment in common fields of medicine such as cancer, orthopaedics and birth by caesarean section. For urinary tract infections, antibiotic resistance is now already commonplace[ii].  Our health systems and all the progress made in advancing patient outcomes could come to a grinding halt.

Taking steps to address the challenge

In the UK, the National Institute for Health and Care Excellence (NICE) is the independent body responsible for producing the nation’s guidance and advice to improve health and social care. Recent guidance addresses the specific threat of AMR and the changes in practice required to tackle it. Encouraging system-level change at this scale has its challenges. And yet incremental change by the thousands of individual healthcare professionals, taken collectively – with the support of the general public, has the potential to make significant and meaningful progress in this global fight.

One of NICE’s guidelines targeted at the general population, covers awareness-raising on how to correctly use antimicrobial medicines (including antibiotics) and the dangers associated with their overuse and misuse. It aims to change people’s behaviour to reduce antimicrobial resistance and the spread of resistant microbes.

Another NICE guideline is targeted at prescribers. It covers the effective use of antimicrobials (including antibiotics) in children, young people and adults. It aims to change prescribing practice to help slow the emergence of AMR and ensure that antimicrobials remain an effective treatment for infection.

While antimicrobial stewardship work has always been part of medicines optimisation, the NICE guideline is intended as a tool to enable change and focus on these issues. We have positive examples in our Uptake and Impact report of where frontline healthcare professionals have done so with encouraging results.

In Northamptonshire, GPs received a large number of broad-spectrum antibiotic co-amoxiclav prescription requests from podiatrists. This was addressed by training podiatrists on antimicrobial stewardship, and including antibiotics in their toolkit as independent prescribers. This encouraged ownership of the prescribing and resulted in a reduction in the prescribing of co-amoxiclav, cephalosporins and quinolones as a percentage of antibiotics from 11% to 8% (Nene and Corby CCGs, March to October 2016), which the GPs largely ascribed to the medicines optimisation work with podiatrists.

In Southampton, providing one to one support had the biggest impact in changing prescribing behaviour. Specific patient examples were discussed with individual prescribers. Data for 12 months up to July 2016 showed that cephalosporins, quinolones and co-amoxiclav prescribed as a percentage of all antibiotic items reduced from 13% to 11%.

A global call to action

AMR is a worldwide problem and we know that evidence-based NICE guidance has the ability to influence innovation and change in practice, not just at home but by clinicians, prescribers and the general population in countries overseas. Take the opportunity given by World Antibiotic Awareness Week to consider NICE’s guidance. Think how you might use this to change and improve your own practice, and strive to be a better antibiotic steward for this and future generations.

If you are a healthcare professional or prescriber using NICE guidance to deliver good practice in antibiotic stewardship, NICE would like to hear about. Tell us about the work you’re doing by completing the submission form here.