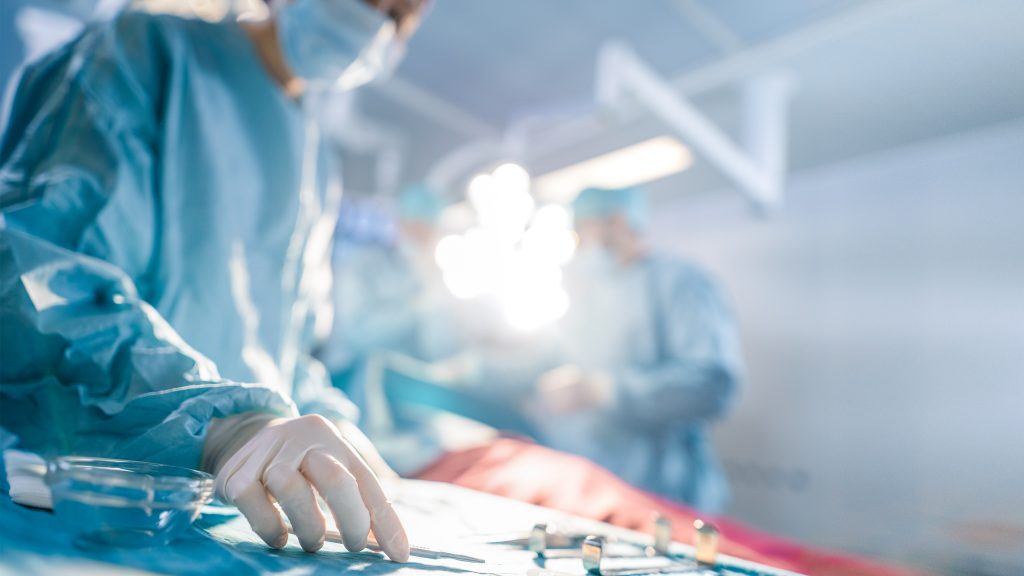 Each year, there are approximately 55,200 new cases of breast cancer in the UK.

People with breast cancer face a host of different treatments including chemotherapy and radiotherapy. For the majority of people facing a breast cancer diagnosis, surgery to remove the cancerous tumour is their primary treatment, with people either undergoing breast-conserving surgery or a mastectomy.

Breast-conserving surgery (BCS) aims to remove a cancerous tumour along with a small amount of surrounding healthy tissue. This border, known as a margin, helps surgeons to determine if the cancerous tumour has been removed. This form of surgery seeks to preserve as much normal breast tissue as possible, keeping most of the breast tissue intact.

But after surgery, patients must cope with a difficult waiting period to learn whether their tumour was successfully removed with a margin of healthy tissue. If the removed tissue has cancer cells that are too close to the edge, known as a ‘positive margin’, the patient must undergo a second round of surgery to reduce the likelihood that their cancer will return. This is something that 1 in 5 women currently experience in England.

Successfully removing all of the tumour first time can be difficult as surgeons lack a reliable, fool-proof imaging system which can provide a clear picture of the cancerous tissue during surgery. Present techniques include using ultrasound during surgery, but this can produce poor images and lacks the sensitivity to give the surgeon the accuracy they need in the operating theatre.

Maria Leiloglou, a PhD student and Martha Kedrzycki, a Clinical Research Fellow based at IGHI’s Hamlyn Centre are developing a solution to this problem. Called GLOW, it consists of a camera device which uses a fluorescence imaging system to illuminate a cancerous tumour during surgery. Their team hope the innovation will prevent people with breast cancer from having to endure another round of surgery.

“Not only is the stress of having that second operation awful, but it also gives patients a worse cosmetic outcome,” says Martha. “It delays chemotherapy, radiotherapy because you want everything to heal before you can start. Trying to address this is so crucial.”

How does GLOW work?

GLOW, which stands for Guiding Light Optimising Wide local excisions, uses near-infrared fluorescence to capture images of the tumour location with the aim of guiding surgeons when conducting breast-conserving surgery.

The camera device captures the light in the surgical area. As the camera has a dual system, the light is then split into two directions producing a colour image, like any typical camera would do, and a fluorescence image.

The fluorescence image picks up a special dye, indocyanine green (ICG), that’s injected into the patient before the surgery begins. This dye is also used to highlight blood vessels in other medical imaging techniques such as angiography and can identify lymphatic vessels. ICG is believed to have the potential to highlight cancerous tissue: “Cancer tumours have a more porous vasculature when compared to healthy tissue, therefore ICG can leak into the cancer and highlight the tumour,” explains Martha.

With two images produced, a normal colour image and a fluorescence one, these images are superimposed to give the surgeon a combined image of the highlighted tumour as compared to its healthy surroundings.

GLOW is currently in its early stages of development. Martha and Maria have just completed their first clinical trial. Their system was tested with ten breast cancer patients who were undergoing BCS. The camera was in use during the surgery of these patients to see if GLOW could capture an accurate image of the location of the cancerous tumour, which was directly compared with the surgeon’s operative results. The first clinical trial has been useful for Maria, Martha and their team to understand how best their camera works:

“This trial was meant for method development. We have proven our camera, we have figured out its optimal light settings, what filter to use and the best timing for taking images,” said Martha. Crucially, the first trial has also successfully shown that the camera is sensitive to the fluorescence signal.

Aiming for a brighter future for breast cancer patients

Maria, Martha and their team are keen to ensure that GLOW can provide the accuracy that surgeons need in theatre, in real-time. Their current challenge is that the fluorescence signal in the camera does not always identify cancerous tissue. They’re now making preparations for their next trial, where they plan to experiment with different drugs and techniques in an effort to improve the sensitivity of the camera.

One of these approaches is to use image texture metrics. Here, the image of a tumour is analysed using various calculations to understand the vessel architecture in tumour tissue and help distinguish it from healthy tissue. These calculations can reveal how the tissue connects together and help analyse the tumour image.

“We’ve started exploring a special image analysis, which is something that nobody has ever done in terms of fluorescence imaging. It’s a very unique approach,” says Maria.

The team also plans to test the potential of using another drug, aminolevulinic acid (ALA) in comparison to ICG. ALA is often used in brain cancer and bladder cancer surgeries. This trial will recruit 40 patients undergoing BCS. The GLOW team hope that they will gain more clarity on the best drug for the camera. The team are optimistic that this second trial can help progress GLOW in several ways:

“As we are recruiting more patients, we hope this trial will give us enough clinical data to investigate the connection between the texture metrics and the tumour. We aim to image the slices of tissue and understand where the unhealthy and healthy tissue lies. This will guarantee a better ground truth for our analysis,” says Maria.

For the GLOW team, their end goal is clear: “Our hope is that we can guide surgeons in theatre, in real-time, to make sure all the tumour is taken first time round,” says Martha. Although more development and trialling are needed, the GLOW team are confident that they can perfect this innovation to prevent more people with breast cancer from enduring the stress of a second round of surgery.