A digital solution to streamline access to smoking cessation interventions

Traditional face-to-face smoking cessation interventions may result in significant delays between the patient’s decision to quit and access to effective pharmacological support or behavioural therapies. In a study published in the journal Public Health in Practice, we evaluated digital solution to streamline access to smoking cessation interventions

This was the first attempt in the UK where a GP-led online portal with added functionality was used to streamline timely access to pharmacotherapy for smoking cessation using an asynchronous formal request for treatment. We evaluated the findings of a primary care pilot from two general practices in West London where 4337 patients who are registered as smokers were contacted with unique link to access the portal.

Whereas smoking is the major avoidable cause of preventable morbidity and mortality in the UK and internationally, there are surprisingly few examples of a patient-facing primary care led IT system to streamline the delivery of evidence based smoking cessation interventions in the community setting. The use of a primary care-led online portal could enable patients to make an asynchronous request for treatment without the need to visit the general practice.

A paper published in the Eastern Mediterranean Health Journal  reviews the current state of tobacco use, governance and national commitment for control, and current intervention frameworks in place to reduce the use of tobacco among the populations of the Gulf Cooperation Council (GCC) member states and Yemen. It further reviews structured policy-oriented interventions (in line with the MPOWER package of 6 evidence-based tobacco control measures) that represent government actions to strengthen, implement and manage tobacco control programmes and to address the growing epidemic of tobacco use.

Increased taxation on tobacco products can be an effective method of reducing tobacco use. In a study published in the Scandinavian Journal  Public Health, Filippos Filippidis and myself, along with colleagues from Harvard University, assessed support for increased taxation on tobacco products and other tobacco control measures among people aged ≥15 years in 27 European Union (EU) during the period 2009-2012.

We obtained nationally representative data from the 2009 (n=26,788) and 2012 (n=26,751) cross-sectional Eurobarometer surveys. Estimates were compared using chi-square statistics. The effect of the relative change in gross domestic product (GDP) on the change in support for increased taxation during 2009-2012 was calculated using the Pearson correlation coefficient and linear regression models.

We concluded that population support for tax increases declined in the EU between 2009 and 2012, especially in countries with declines in GCP. Nonetheless, public support for other tobacco control measures remains high, thus indicating a viable environment for the use of more comprehensive tobacco control policies. 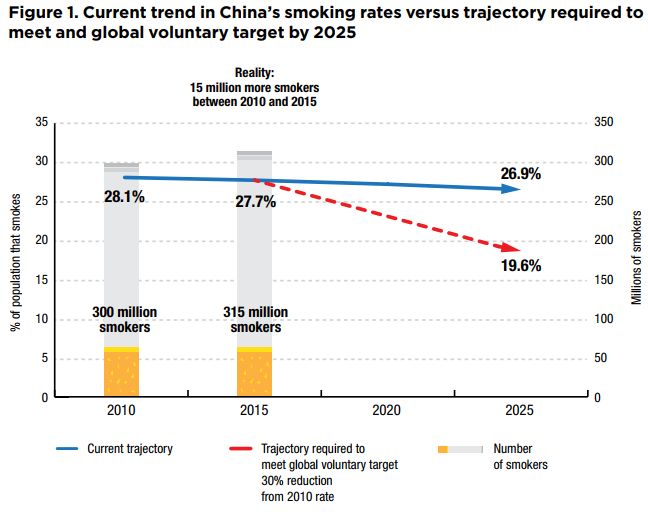 Professor Christopher Millett and Dr Anthony Laverty from the Public Health Policy Unit at Imperial College London contributed to a ground-breaking WHO report which provides an analysis of the current health, social and economic costs and impacts of tobacco use and policies in China. The report highlights the impact of tobacco use on development, with special emphasis on poverty and inequality and the tremendous burden tobacco represents for the poorest and most vulnerable.

China is the epicentre of this epidemic, and thus lies at the heart of global efforts to stop it. China is the world’s largest producer and consumer of tobacco. A staggering 44% of the world’s cigarettes are smoked in China. One million people die of tobacco-related diseases in China every year, many of them in the prime of their productive years.

The report can be viewed on the WHO Website.