Calls are now open for contributions to the 2018 Engage Conference. We hear from Nathan Green and Denise Sime who presented at last year’s conference. They discuss their experience of sharing their learnings on LoL-Lab, a co-created comedy event between Imperial researchers and the public. If you would like to apply to be part of this year’s conference, get in touch with us at ppi@imperial.ac.uk for support with an application.

What is the Engage conference?

Nathan: The National Coordinating Centre for Public Engagement (NCCPE) annual conference, Engage 2017, was held over two days in December in Bristol. We saw presenting at this workshop as a fantastic opportunity to share lessons from our own public engagement experience. Our workshop was titled ‘LoL-Lab: Patient and public involvement via science stand-up comedy’.

Denise: The theme of the 2017 Engage Conference was: “Exploring Collaboration”. For me, the title said it all – a collaboration between scientists and non-scientists. The conference brought together researchers from various universities all around the United Kingdom and members of the public who are interested in engaging with Higher Education institutes.

What did you do at the conference?

Nathan: We were scheduled for the second day of the conference, alongside sessions such as ‘the dynamics of co-production’ and ‘responsible research and innovation’. We advertised the session as a workshop on how to successfully incorporate comedy techniques and ideas in science communication. We aimed to involve the audience so that they could get a feel for doing science comedy and gain the confidence to do it themselves.

The workshop was co-led by myself and Denise, a member of the public involved in LoL-Lab. Throughout the workshop Denise acted as the perfect bridge between the academic (me) and the participants. 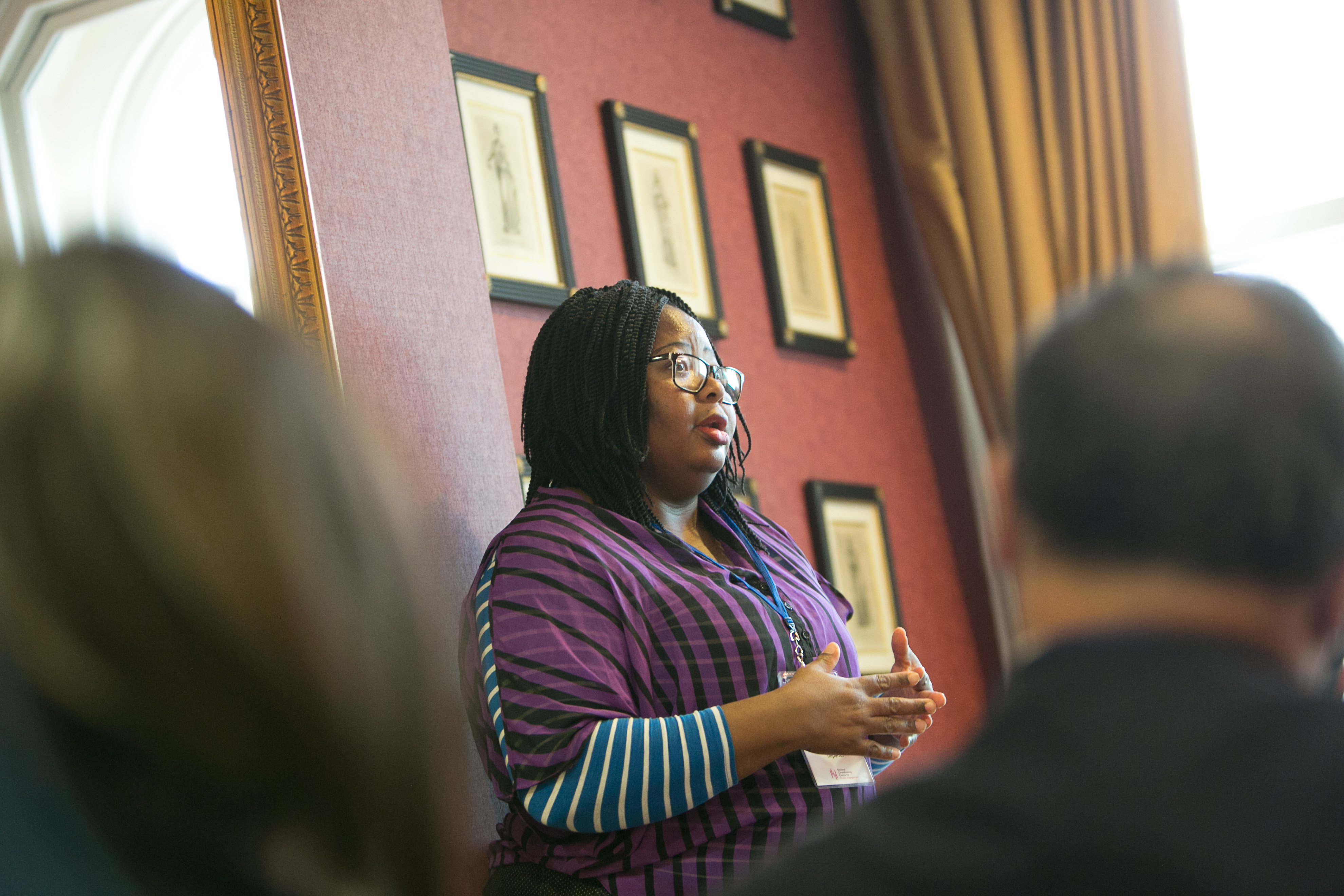 So how did it go? How did you manage to fit Star Wars into the workshop?!

Nathan: After introductions we went straight into the comedy by recreating some of the idea and joke generating exercises. The first exercise was to demonstrate how specific attitudes and unpredictability can lead to humour. Three people sat in a row facing forward at the front of the room. One person starts to tell a story and the next person continues telling it but with a different emotion, such as angry, happy, resigned, or confused. We ended-up with a very unusual recounting of a holiday!

A second exercise encouraged them to take alternative perspectives on something otherwise familiar, such as film storylines. Participants had to describe a film in one sentence, from the point of view of an alien or a child and everyone had to guess the film. Star Wars has never sounded so peculiar.

Finally, we discussed the PPI elements of Lol-Lab. For the Lol-Lab project the members of the public were important to the creation of the final event by providing a sounding-board for ideas  about how to make research understandable and funny.

What did the participants learn from your session?

Denise: Towards the end of the workshop attendees were interested in questions such as: How did I get involved in Public Engagement with Imperial College?  What are the methods of recruitment used by Imperial College?

Nathan: The participants were really interested in how we recruited members of the public to take part. How did they find out? What motivated them to take part? It seems this is something that everyone can find challenging and lessons learnt from others can prove valuable. As making PPI accessible to as many people as possible is so important the process by which members of the public are recruited still needs to be improved. The most successful strategies for recruitment were to target particular networks, and invite them individually, such as the local sixth form college or the community centre, rather than a general poster campaign.

Be honest – did you make people laugh?

Nathan: We finished by showing a few videos of stand-up comedy sketches from the final event. I was happy not to perform them live… 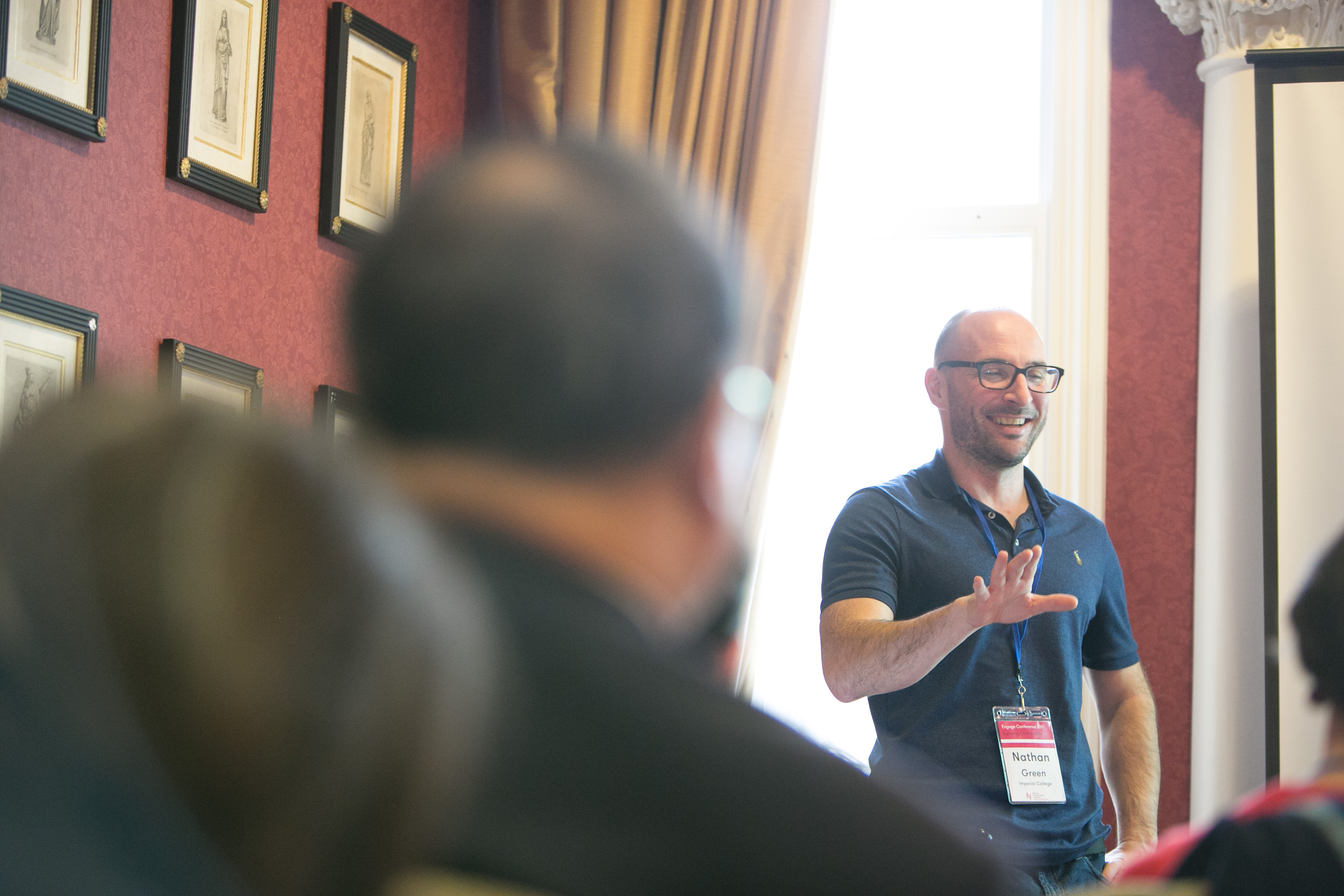 And would you do it again?

Denise: I am very delighted that I attended the 2017 Engage Conference and co-delivered the workshop alongside one of the scientists at Imperial College.  I believe that it is a good initiative to encourage collaboration between scientists and non- scientists. I would like to attend this year’s Engage Conference if I am invited.

Nathan: I was pleased to have done the event. There was a lot of interest and I’m looking forward to hearing about similar activities in the future. I learnt that there is enthusiasm and motivation for trying out new ways to engage with the public. The conference was personally very interesting as something very different to a statistics conference that I’m used to. Discussion in the sessions was encouraged and there was a lot of variety. There were lots of high-level themed sessions on how public engagement is viewed, facilitated and promoted at institution and national levels. However, I was most interested in hearing about case studies of successful and creative projects and the difference that they can make to people.

Nathan Green is a Statistician and Mathematical Modeller Research Fellow in the Department of Infectious Disease Epidemiology. He is also involved with the Statistics, Modelling and Economics Department at Public Health England.

Denise Sime is a non- scientist member of the Public Panel within the Health Protection Research Unit in Modelling Methodology.