In conversation with Olive Adams, Patient and Public Involvement (PPI) Midwife working with Professor Christoph Lees and the research team based at the Centre for fetal care at Imperial Healthcare Trust and Women’s Health Research Centre at Imperial College London.

How would you describe your role as a Patient and Public Involvement (PPI) Midwife?

My role as PPI midwife was specifically developed to ensure high quality public involvement activity was undertaken across all of Professor Lees upcoming projects within the Women’s Health Research Centre, including enabling involvement at the very  earliest stage of each study.

I had some experience of undertaking PPI activity as a research midwife which has helped me to undertake this role (see my previous PERC blog post outlining my previous public involvement activity here).

What patient and public involvement activity did you undertake and what project was it for?

We undertook public involvement for a new clinical trial which aims to explore a possible treatment for early onset pre-eclampsia. Pre-eclampsia is a complication of pregnancy which affects 2 – 8 % of pregnancies, it is characterised by raised blood pressure and protein in the urine. It is a major cause of maternal mortality and morbidity, pre-term beth, fetal growth restriction and miscarraige. Early-onset pre-eclampsia occurs at preganancies before 30 weeks.

Our trial aims to investigate the tolerability of a medication to reduce the effects of pre-eclampsia and improve the outcome for these women and babies. The medication proposed to be used, S-nitrosoglutathione (GSNO), is deemed safe but is not used in current practice. While there has been some research already in this area, further research is needed to understand the effect of the use of the medication for 7 days and to establish what dose of GSNO there is the greatest improvement in a woman’s condition.

Our trial will particularly explore the safety, tolerability of GSNO in women with early onset pre-eclampsia and will take place across sites in the UK and South Africa. Successful completion of this study would lead to further studies which would go on to examine the effectiveness of GSNO to improve outcomes for women with early onset pre-eclampsia and  their babies.

Our public involvement activity aimed to capture the views of women who had direct lived experience of the research area, those who had experienced pre-eclampsia during their pregnancy. We felt that by involving (and capturing the perspectives of) women with lived experience similar to those we were planning to recruit throughout the study would ensure we had the best chance (from the outset) of ensuring our research was relevant, appropriate and would be acceptable to those who would be taking part. As the study is in the pre-funding stage we wanted the views of patients and the public to feed into and shape the development of our project proposal and funding application.

To achieve this we undertook two online dicussion groups held at different days/times, to ensure we were able to involve as many people as possible. These discussions provided an opportuntiy to initially explain the project (in brief) and openly discuss the acceptability of the study. During the session we posed questions relating to the design of the study to the group, specifically we asked those involved to hypothetically consider that they were a participant in the study. Through this activity we wanted to understand what they believed would be important as a potential participant in the trial and what expectations they would have from the study team. We also explored possible motivations and barriers to join the study and their views on the length, frequency and method of follow up period after taking part in the study.

How did you find those who you involved?

We used multiple approaches to identify women who were interested in being involved; I approached the charity, Action on Pre-Eclampsia regarding the opportunity and asked whether they would be able to share the details across their networks.  I also promoted the opportunity on the VOICE global online platform and the NIHR People in Research platform, both which help researchers promote their opportunities to patients and members of the public interested in shaping and influencing health and social care research.

Were the people you involved given any training or support?

No formal training was necessary, as it was their lived experience that we were trying to capture in this activity. I did however provide background information regarding the project and an overview of the purpose of the discussion groups. I also described what they could expect from being involved via email once people had expressed an interest in being involved.

For those who were new to patient and public involvement I also shared the following public reviewer online training provided through NIHR to help them understand how their views and perspectives could help inform and make decisions about research. 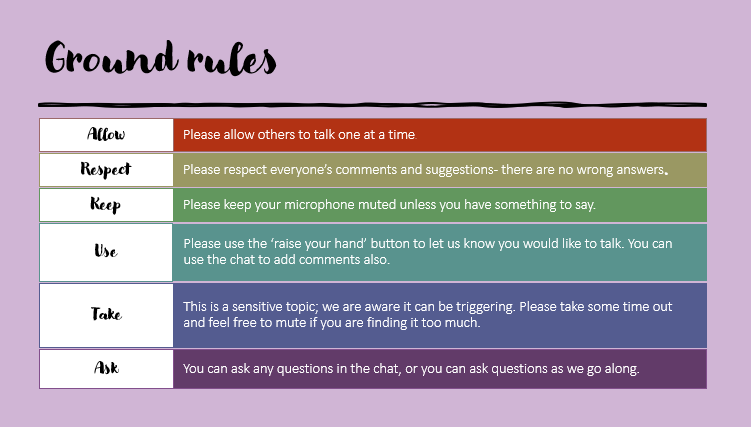 The women who joined our discussions were so helpful, honest, and open about their experiences. Some experiences were positive and exemplar to high standards of care, others however, experienced the harsh realities of inconsistencies in care. It was important for us to hear all types of experiences and giving those with lived experience the opportunity to be heard was rewarding from the research team’s perspective but also for those involved.

All those involved in the discussion group felt that the research we were proposing had potential to benefit women and society in a positive manner. They also provided practical suggestions for the design of the study particularly around ways to improve recruitment and retention of the study.

Shortly following the discussion, we documented all the key discussion points and suggestions from the group in a PPIE impact log provided by PERC. I wanted to ensure that during these discussions, I accurately captured what women believed to be important and exactly what was voiced by them. The impact log has been a useful tool to record these recommendations, to document what changes have been made to our study in response to these and to lastly reflect on the impact that these discussions have had on our project. The log will also help me to feed back to those involved as to how their experiences and suggestions have shaped and influenced our research and could also help inform future studies. I also sent a feedback form to the participants after the meeting which was a useful way for them to voice an further thoughts about the project and provide suggestions on how I could improve these meetings going forward.

It was of immense support having the resources and support of the PERC team which ranged from advice over emails to attending the PPI meeting as an extra support on the day. You can find a templates, resources, guidance and further support on their Public Invovlement Resource Hub.

The women involved responded positively to our opportunity. They felt able to contribute to the research as it was relevant to their own experiences and were grateful for the opportunity to share their stories to a listening ear. During each of the discussion groups we posed the question “Do you think this research is important?”  Our participants felt strongly about our research topics and all felt that they were important areas of research to pursue. The input from those involved, stemming from their lived experience had a positive impact on the research with lots of practical suggestions.

All the participants agreed the significant need and value for the study, highlighting that this research would address a current unmet patient need. This provides the need for momentum to initiate and conduct the research. The women involved also made suggestions to consider a wider set of topics around Pre-eclampisa which may not have been brought to the spotlight. The suggestions included education on the condition to be at the forefront of care and especially to those who have risk factors identified by their healthcare professional to developing Pre-eclampsia. It was felt for first-time mothers that awareness of this complication was low.

There have been many suggestions to help adapt the language of documentation to suit the target audience and ensure the project was conducted in a way that made it easy for people to participate. There were also many suggestions for the study team to take on board in planning for recruitment of potential participants, particularly considering sensitivies approaches to recruiting women with early-onset pre-eclampsia who will be in a difficult and challenging situation.  We are looking at how to integrate these suggestions into our project and hope that they will help improve the acceptability of our study to potential participants as well as the experience of taking part.

Some of the areas and suggestions which were raised/discussed included:

It was a privilege to hear each of the women’s stories, some of which provided an important reminder of the need for individualised clinical care and the impact on the patient if they are not listened to. Those involved highlighted that there was still an unmet need for research in the treatment of pre-eclampsia. The women involved reported to feel empowered at the opportunity to be involved in a study that would allow them to help other women so they wouldn’t go through the same experiences as their own. Those involved also noted that sharing their own experiences with other people who had gone through similar experiences also was beneficial to them. Overall those involved  felt useful, valued and listened to and evaluated their involvement positively. Many of the women involved have now signed up to be committed as a long-term patient and public advisors to the trial if the study receives funding to go ahead.

What was the most challenging part of doing public involvement and how did you overcome it?

The activity was underpinned with some challenges due to covid restrictions; our discussion groups were held virtually which meant we had to rely on technology working and needed to ensure that those involved felt comfortable and confident using MS Teams. I received great support from PERC with many suggestions and advice on how to plan and undertake the activity in an online format. It was harder than I expected to host the discussion groups online. The group was supportive of each other but there is something extra that exists in a room full of people. While the online discussion group was extremely valuable, I do believe it would have been more powerful in person.

The  discussion groups were aimed at specific patient groups (women who had lived experience of pre-eclampsia) and it took time and effort to ensure that I was involving those with the most relevant experience. I found that support groups for specific conditions and charities were the most helpful for finding those with the experience I was looking for.

I was also concerned that the content of the discussion may be sensitive for some people or how the discussion may lead to. However, a member of PERC was very supportive and even joined our meetings in case of any issues of this nature.

Definitely undertake patient and public invovlement for your project, it is so helpful and will add immense value and benefit to your research. The highlight was hearing women share their experiences, they had so much enthusiasm and great suggestions for the studies. I have thoroughly enjoyed the opportunity to provide the platform for the women with lived experience of pre-eclampsia to have their say, advocate for their peers and for the suggestions to become incorporated changes to our projects.