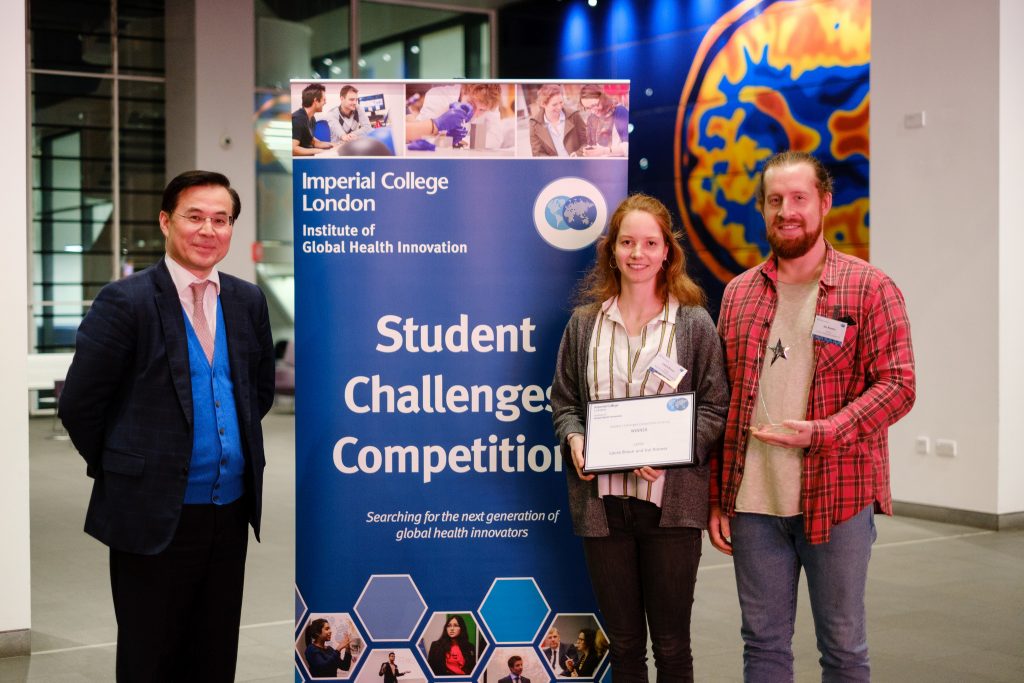 Third-year PhD students Laura Braun and Kai Riemer are currently recovering from one of the most pivotal weeks in their careers so far.

Behind Capta is an important global health issue. Parasitic worms are responsible for soil-transmitted helminth infections and diseases such as schistosomiasis. According to the Centers for Disease Control and Prevention, more than 200 million people are infected worldwide by schistosomiasis, which can cause malnutrition and long-term health problems like organ damage. The lack of attention to these diseases in public health inspired Laura and Kai to make them their focus. “They’re diseases that are neglected, they’ve lacked a lot of funding and research in the past decades. I also really like worms, they’re fascinating!” said Laura.

Remarkably, Laura and Kai only established their idea one year ago. The project came about after meeting for the first time through the Imperial-Tokyo Tech Global Fellows Programme, where they were tasked with creating an idea to tackle an aspect of poverty. Crafting the bare bones of Capta, they realised their project had the potential to make a real impact. “As I had a background in diseases and Kai had a background in imaging, the idea developed from there,” Laura told us.

Although Capta has only been in existence for a year, Laura and Kai have moved quickly to progress their device. “We developed our first prototype in late summer 2018, and then started testing it at the Natural History Museum where we gathered data,” explains Laura. This helped the duo to refine their product, experimenting with different microscopes.

What they came up with is a smart, low-cost tool to accurately and rapidly diagnose parasitic worm infections. Compared to current labour-intensive testing, their handheld microscope uses machine learning and automatic imaging to analyse samples. The device also records data to provide real-time statistics on global disease burden. Capta hope that their tool will allow for faster diagnosis of these infections, and help target treatment to areas that need it the most.

“There are a lot of unpolished things behind the curtains”

While Laura and Kai’s PhDs armed them with the necessary scientific knowledge for their project, turning it into a viable business venture was where they needed help. That’s where the Imperial Enterprise Lab stepped in. “They helped us to pick this one idea out of the few we had developed and made sure we talked to lots of people and got customer feedback,” said Laura.

Of course, giving a project like Capta the time it needs to come to life can be tricky while finishing a PhD! “We’ve managed it just by doing it in our free time, and it’s still related to both of our PhDs so that really helps,” said Laura. And while Capta has made tremendous progress in a short space of time, Kai is refreshingly honest about how aspiring entrepreneurs can expect a few bumps on their journey: “Not everything is as shiny as it seems…We failed at our first pitch. Don’t get caught up with all the cool newspaper headlines because they don’t tell the whole story. There are a lot of unpolished things behind the curtains.”

The duo has learnt a lot about developing a business venture along the way. Kai’s advice to budding student entrepreneurs is to seek expert opinion from outside of your immediate circle: “Advice from somebody supporting you who is not part of the team is really helpful. Because they will show you new things, but also the obvious that you tend to forget.”

Looking towards the future

Now that Capta has gained some crucial funding, what’s next for them?

“The money will go towards a trial that we plan to do this summer,” Kai tells us. “It will either be in Ethiopia or Uganda. We will also use the money to refine the product before and after the trial, for the website, and organisational stuff.”

The vision for Capta is now long-term, but this wasn’t always the case. Laura and Kai’s goal posts have changed vastly throughout their journey. “We didn’t have the highest expectations, we never thought we’d take home any prizes!” said Kai. But winning IGHI’s Student Challenges Competition and the Social Impact track at the VCC has given Laura and Kai the confidence to set an end goal for their device: “We want to see our product in a local clinic,” said Laura. “We think it will be a year or more until we get to that stage.”

Laura and Kai have clearly come a long way in a short space of time. What started as a project for an event has now gone on to become a viable business idea that addresses a pressing global health challenge. Anticipating a week of stress and nerves before the competitions, their hard work has ultimately paid off, Laura adds: “It started off being horrible, and it’s gone on to be amazing!”