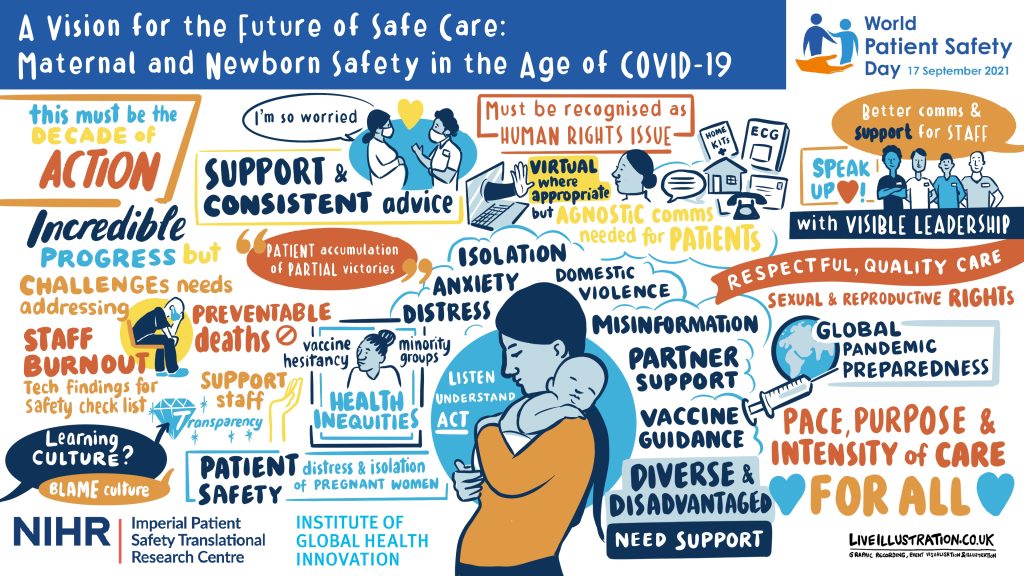 The Institute of Global Health Innovation hosted their third World Patient Safety Day event on the 17th September, with the theme of safer maternal and newborn care. The aim of this year’s World Patient Safety Day was to raise awareness of maternal and newborn safety and engage different stakeholders – from healthcare professionals to decision-makers – in adopting strategies to improve them. This virtual event was chaired by Dr Mike Durkin, IGHI’s Senior Advisor on Patient Safety Policy and Leadership, and included a range of speakers and panellists. Throughout the event a graphic artist created a live illustration that captured key messages, displayed above. On this third World Patient Safety Day, Dr Durkin recognised the thousands of events taking place across the globe as a testament to the commitment of patient safety champions, but most of all patients and their affected families.

The event was opened by Professor the Lord Ara Darzi, IGHI’s co-director, who stated that maternity is a key focus of patient safety, yet he acknowledged that the pandemic had had adverse consequences on maternity staff and patients. The Rt Hon. Jeremy Hunt MP emphasised that there are around 150 avoidable deaths a week, which are wrongfully seen as a “cost of doing business”.

The safety of maternal and newborn care has seen incredible progress but many challenges remain. To gain a greater understanding of these, a team from the IGHI’s NIHR Imperial Patient Safety Translational Research Centre held focus groups with people who have recently used these services. Participants discussed their experience of childbirth and access to services, both before and during the pandemic, to inform the event’s panel discussion. The focus groups also discussed how women could be given holistic support in a remote context, given their feelings of anxiety and partners’ absence from appointments due to restrictions.

The challenges of remote maternal care were explored further in the event’s live panel discussion by Mandy Forrester, midwife advisor at the International Confederation of Midwives, who reported that maternal health services were not regarded as essential during the pandemic. She labelled this lack of recognition as a “human rights issue” and stated that systems designed to uphold the rights and safety of women have been forgotten.

Both Dr Aidan Fowler, national director of NHS patient safety, and Professor Jacqueline Dunkley-Bent, chief NHS midwifery officer, recognised the inequality in maternal and neonatal health outcomes experienced by Black, Asian and Minority Ethnic groups. Professor Darzi supported this notion in his keynote speech, where he pointed out people from minority ethnic backgrounds and those in socially deprived or other disadvantaged groups have higher stillbirth and maternal mortality rates.

Addressing the burden on healthcare staff

The pandemic has placed a heavy burden on healthcare workers, particularly in the field of maternal and neonatal healthcare. Professor TG Teoh, Director of Women’s & Children’s Services at Imperial College NHS Healthcare Trust, commented that if we do not care for our own staff, then we cannot provide effective care for patients. His biggest struggle in the pandemic was communicating continuously changing protocols and restrictions to staff, while operating in an already entirely new context. Forrester added that since in some contexts midwives were not recognised as essential workers, they were not always entitled to personal protective equipment (PPE).

Midwives were redeployed, which further deteriorated their pre-existing shortage, resulting in unsafe and unsupervised care. Combined with the fact that many women faced the absence of their partners, Professor Teoh stated that midwives and doctors had to balance remaining a caring professional with the added element of support for their patients. The pressure of the additional workload on healthcare professionals exacerbates what is known as the “second victim” concept, mentioned by Hunt. This concept, originally introduced by Professor Albert Wu, addresses the blame felt by doctors and nurses when their care leads to harm. The second victim causes a fight or flight response, which prevents a learning culture and breaks the bond between patient and clinician. These pressures of the pandemic have highlighted the importance of caring for those who care.

Global perspectives on the pandemic

The event considered how the pandemic has been experienced differently across the globe. Darren Welch, Director of Global Health for the Foreign, Commonwealth and Development Office, described how their work was made increasingly difficult in countries where health systems were already strained and under-resourced. It is estimated that the pandemic has forced over 150 million back into extreme poverty, which has inevitable impacts on their access to healthcare.

Discussions suggested that racial disparity in childbirth is faced across the world. Professor Dunkley-Bent proposed the Michael Marmot principle of proportionate universalism as a future approach for equity in maternal and neonatal care. This states that healthcare must be applied at a scale and intensity that is equal to the level of need. In other words, disadvantaged groups have the greatest need in healthcare, so they must be prioritised to progress towards equity.

Towards safe and equitable maternal care

Speakers and panellists considered the next steps for safe and equitable maternal and neonatal care. Professor Darzi was first to mention the importance of vaccinating all pregnant women. The need to learn from past mistakes was emphasised, as TG Teoh suggested vaccine hesitancy in pregnant women may have been, in part, due to them being excluded in research and clinical trials from the beginning.

Although the pandemic has had a negative impact on the mental health of healthcare workers, it has also provided an opportunity for positive change and comradery. Dr Suzanna Sulaiman, Head Consultant in Obstetrics and Gynaecology at KK Women’s and Children’s Hospital in Singapore, saw her hospital employ social workers for staff to voice their concerns. Hospital leadership was therefore able to effectively understand how to help their team. Such initiatives can serve to build the foundations for future progress.

A key recurring theme was shifting from a blame culture to a learning culture. Dr Fowler discussed the importance of this in addressing inequality; he stated that we must seek to understand why harm is experienced more by certain groups and the cultural competencies of staff. This is a vital first step, he said, in developing communication techniques agnostic of background.

An important quote from the event was one from Dr Henry Kessinger, who described diplomacy as the ‘patient accumulation of partial victories’, which Jeremy Hunt suggested was a great way to describe progress in patient safety. Not to be disappointed by a partial victory, and not to be put off by the patience involved.