The first Imperial College Research Software in Physics event took place on Friday 17th of May. This event, organised by the Imperial Research Software Community and supported by the College’s ICT department, aimed to help researchers to meet others writing or using research software (RS) in Physics and learn about resources available to help them do so. It gathered around 25 people from all seniority levels and several departments, who shared for over two hours their experiences and opinions on different aspects surrounding the development and use of software for research. 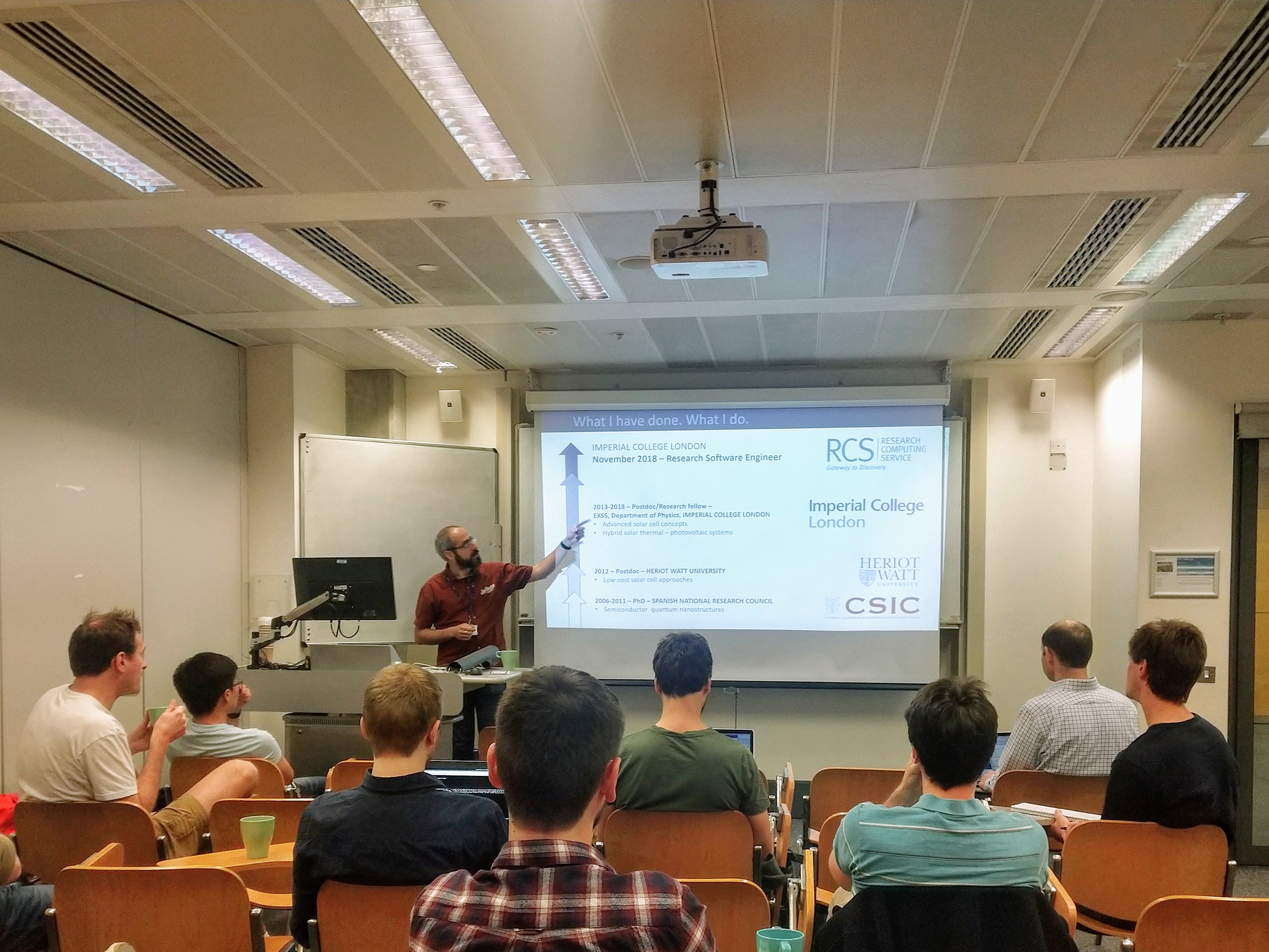 The event was opened by Diego Alonso Álvarez, a member of the Research Software Engineering team in the Research Computing Service and ex-member of the Physics Department, and Jeremy Cohen, coordinator of the Imperial Research Software Community. Between them they gave an overview of the value of research software (RS), the services available at Imperial to promote software sustainability and good coding practices, and the broader landscape of the RS community in the London area and the UK.

Pat Scott, a lecturer from the Astrophysics group, gave the first of the invited talks, focused on GAMBIT, “a global fitting code for generic Beyond the Standard Model theories” but with potential utility in any other research discipline. Pat highlighted that coding is not an add-on in physics any more but an integral part of it. He also pointed out that while it is important to have good coding practices, increase your user base and publish papers on your code, in the end, in the broader community, you will be judged by your contributions to physics, not software.

The second talk was given by Kelvin Choi, PhD student from the Space & Atmospheric Physics Group, broadly speaking about the challenges involved when working with climate data and models. Among other topics, Kelvin discussed the need to wrap legacy code in more modern languages in order to maintain the traceability and the comparability of the results to those carried out in the 1980s. He also described the need for a pipeline transforming the raw TB of data coming from the satellites to the end results, gluing together different software – often written in different languages – and combining different data formats.

These speakers were followed by 7 lightning talks given by researchers in the department and the Imperial RSE team, including:

All the talks were very engaging and in several cases sparked discussion points that were adopted for the final part of the event. In the discussion session, the audience was divided into groups around different topics ranging from code peer review and code review practices in the software engineering industry, testing practices and reproducibility or software development models and methodologies within the research community. Dedicated blog posts on the contents on these discussions will follow in due course.

Many thanks to Pat Scott, all the speakers, and everyone who attended the event.