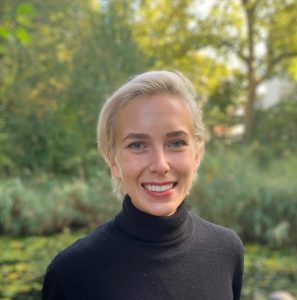 Galina Jönsson is a PhD student in the Department of Life Sciences, and part of the Imperial delegation heading to COP26.

In the broadest possible terms, my research is about biodiversity trends – specifically, I extend biodiversity time series backwards in time by using Natural History Museum specimens to cover the whole period of accelerating human pressures. This includes climate change effects (such as rising average temperatures and increased frequencies of extreme weather events), as well as land use changes. I focus on butterfly specimens collected over the past two centuries to develop novel statistical ‘time-travelling’ methods.

The problem is that we rarely have biodiversity trends prior to the 1970s, whilst in many countries, large-scale landscape transformations that most certainly affected wildlife occurred in earlier decades, such as the enormous agricultural intensification seen in Britain around the 1950s. Having long-term time series allows us to more accurately estimate biodiversity responses to separate and combined human pressures, and also improve predictions of future biodiversity trends, including what various suggested and pledged nature-based solutions would mean for biodiversity.

I really want to stress that the climate crisis and biodiversity loss are so deeply intertwined – biodiversity loss drives climate change and vice versa, and often the solutions – nature-based solutions – to both can be the same. We have the Convention on Biological Diversity (CBD) and also the UN Framework Convention on Climate Change (UNFCCC) with their own separate scientific bodies that don’t really talk to each other. The problem can be then that progress towards one can be at the expense of another instead of having this unified kind of approach where international goal and targets are well-informed and appropriately implemented to simultaneously tackle both crises.

My work is quite literally producing the types of data we need to formulate informed and effective policies for the second COP26 goal: ‘adapt to protect communities and natural habitats’.