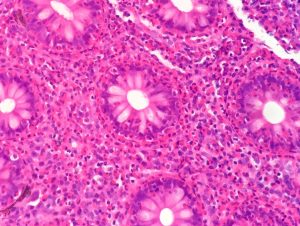 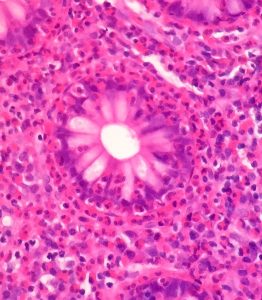 Not “Everyone Must Get Stoned” *

My first blog is going to be about gallstones. There is no special reason for this other than they are common (and, therefore, I hope this will be of interest to lots of people) and I happen to find gallbladder pathology interesting!

Below is a picture of a case I cut up yesterday: 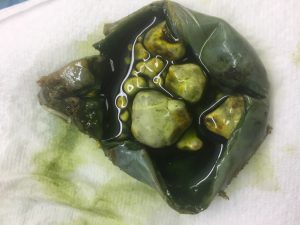 As a medical student, I remember that the risk factors for gallstones were described as being “fat, fair, female and forty/ fertile ”  (depending on the specific version of the mnemonic).

How does this shape up now?  In this blog my core reference is Robin’s Pathology (in its range of formats) but will use a range of others. I will return to the topic of textbooks another time.

According to Robbins Basic Pathology (page 673):

Age: The prevalence of gallstones increases with age; over a 1/4 of people aged over 80 years have stones.

Sex: At every age, they are twice as common in women.

Ethnicity: They are very common in certain Native American groups.

Hereditary:  Family history and genetic disorders of bile salt metabolism. Although not mentioned in Robbins,  patients with haemolytic anaemias, including genetic ones such as Sickle Cell Anaemia, are at increased risk of pigment stones.

Disorders affecting gallbladder motility: These includes pregnancy which contributes to the female and fertile risk.

So how does the mnemonic stand up? I came  across a paper (Postgrad Med J. 2013 Nov;89(1057):638-41. ) which directly addresses this question and concluded: “Our study found that the validated ‘students’ 5Fs’ mnemonic retains a role in clinical diagnosis of patients suspected of cholelithiasis but the factor ‘familial’ should be substituted for ‘forty’ in recognition of the role of inheritance and the changing demographics of gallstone incidence.”.

Read Not “Everyone Must Get Stoned” * in full