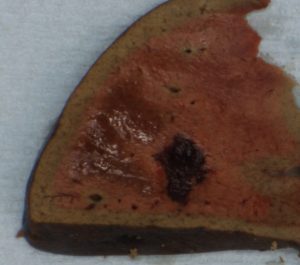 These are common but remember that a tumour is just a swelling and they are not all neoplastic.
Capillary haemangiomas are composed of small blood vessels with inconspicuous lumina. They occur in all organs but particularly come to notice when they involve the skin. A “port wine stain” and a “strawberry mark” are examples of these. The latter initially grow rapidly, soon after birth, and then may regress completely, usually by 10 years. Whether they should be considered as true neoplasms is not clear.
Angiomas may, also, be seen in the placenta (chorangiomas) and, because of the increased blood flow, cause fetal heart failure.
Following trauma some patients develop pyogenic granulomas. This is sometimes called a lobular haemangiomas because of the lobular arrangement of the blood vessels in them. This is a reactive not and not a neoplastic process and is commoner in pregnancy.
Bacillary angiomatosis is another non-neoplastic vascular proliferation that is most commonly seen in association with AIDS and which is due to infection with Bartonella.
Unlike capillary haemangiomas, cavernous haemangiomas, contain prominent vascular spaces containing blood. They carry a significant risk of rupture and bleeding and hence of intracerebral haemorrhage, when they occur in the brain, or intraperitoneal haemorrhage, when they occur in the liver
Vascular hamartomas (malformed) blood vessels may be seen in a number of syndromes such as the von-Hipple-Lindau Disease and the Sturge-Weber Syndrome.
Glomus tumours, which are derived from glomus bodies (which are in the skin, are composed of an arterio-venous shunt and are involved in temperature regulation )may have a variable amount of angioma mixed in with them; if this is marked they are called glomangiomas. The purer form mostly involves the extremities and are extremely tender.