This year’s International Open Access Week takes place from 24–30 October, and the theme is Open For Climate Justice.

This year’s theme seeks to encourage connection and collaboration among the climate movement and the international open community. Sharing knowledge is a human right, and tackling the climate crisis requires the rapid exchange of knowledge across geographic, economic, and disciplinary boundaries.

At Imperial College London, we provide advice and guidance on an ever more rapidly changing open access landscape. The last 12 months have seen: 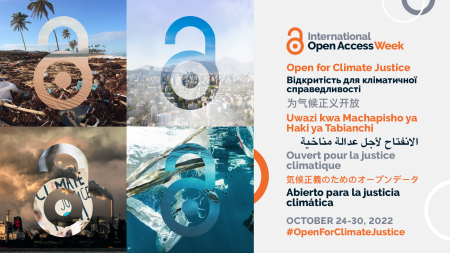 The upcoming Open Access Week will allow us to announce several initiatives and news items relevant to Imperial researchers and the wider community.

They will include the following:

In the meantime, for open access advice, guidance and updates, email openaccess@imperial.ac.uk or visit the open access website. You can also request a one to one either via Teams or in person, or a training session for your group or team. You can also sign up to the Imperial Open Research Newsletter (requires an Imperial email address), and follow us on Twitter at @OAImperial and Yammer at Open Access publishing – LI.

In addition to signposting the full UKRI consultation documentation and list of questions, consultation on the Imperial College response to the UKRI OA review has been undertaken as follows:

Thesis Thursday from 1920: “He wanted to infuse others with the spirit of research and to disseminate knowledge”

To commemorate the second Thesis Thursday during global Open Access Week (October 21-27, 2019) we have gone down to the basement of Central Library here at South Kensington to look at our collection of doctoral theses.

It’s there that we discovered the earliest doctorate thesis that we hold (the degree of Doctor of Science (DSc) to one Surendra Nath Dhar with a thesis entitled A New Method of Halogenation which was awarded in 1920 in the Department of Chemistry.

Surendra was a twenty-six year old Chemist from Assam in India who to came to London in September 1918 in the very last months of the Great War. He was a student of Sir Jocelyn Field Thorpe – but here’s the whole story written by Tanjore S. Natrajan courtesy of the Journal of the Chemical Society, Transactions.

SURENDRA NATH DHAR was born in January, 1892, in a village in the Moulviba, zar sub-division of the district of Sylhet in Assam. He received his early schooling in the village ”Pathsala” and later in Muraricharid school at Sylhet. In 1909, he passed the entrance examination of the University of Calcutta and became a ward of Sir Prafulla Chandra Ray. Studying first at the Ripon College and later at the Berhampore College, he completed the courses for the intermediate and final B.Sc. examinations; in the latter, he was placed in the first division with honours in chemistry.

Dhar’s post-graduate studies commenced in 1913 at Dacca under Dr. E. R. Watson (now Principal of the Technological College at Cawnpore) and he obtained the M,Sc. degree (first class) in 1915. It is at this time he was initiated into research work on the xanthone series by Dr. Watson. As Assam Government Scholar, he carried on research work at the Presidency College, Calcutta, for two years. He was then appointed Professor of Chemistry at the A. M. College, Mymensingh (Bengal) and, three months later, Guru Prasanna Ghose Scholar of the Calcutta University. On the recommendation of the Government of Assam, the scholarship of the Government of India was awarded to him. With these two scholarships, Dhar left for England in September, 1918. He entered the Imperial College of Science and Technology, London, where, under the able guidance of Professor J. F. Thorpe, he continued his work on the xanthone series. After a year’s work, he was admitted to the D.Sc. Degree of the London University. He spent a year in touring the Continent, and then, after working for some time on colours at the Badische Anilin- und Soda-Fabrik, returned to India. In July, 1921, he entered the Indian Educational Service and was appointed Professor of Technical Chemistry at the Civil Engineering College, Guindy, Madras.

Here, unsupported, and hampered by the difficulties attending retrenchment, Dhar laboured to improve the condition of the chemical department. Here also, on December 9th, 1923, occurred his tragic death, due to the inadvertent inhalation (or tasting?) of potassium cyanide fumes.

Dhar leaves behind an old mother, a young wife-he was married, only in June, 1923, to Miss Nanda Rani Sinha-and a large circle of friends and co-workers at Madras and Assam. Whatever might have been his rank as a chemist, his place as a man is assuredly very high. He wanted to infuse others with the spirit of research and to disseminate knowledge. His maxim was :-” No one for himself alone; all for all and every one for others.” He was intensely religious and a splendid example of plain living and high thinking. Simple in habits, unostentatious in manner, diligent in study, and careful in his work, he gave promise of a great career, which the cruel hand of death has brought to an untimely end. An affectionate son, a loving friend, and a dutiful man, his like it will not be easy to find.

DOI: 10.1039/CT9242502677 (Other) J. Chem. Soc., Trans., 1924, 125, 2677-2698
Surendra sounded like a thoroughly nice chap and of the three published papers he produced during his time at Imperial, like all good students he thanked his research supervisors for their “kind encouragement” –  Professor J Thorpe but also Martha Annie Whiteley, a prominent Chemist who was best known for her dedication to advancing women’s equality in the field of chemistry.
The most famous/notorious story in chemistry about cyanide revolves around Gilbert N Lewis, who despite being nominated 41 times for the Nobel prize and who was the first person to identify the modern story of the chemical bond in 1916 never won it. His great rival however, Irving Langmuir, did win it and was suspected of poisoning him after a lunch they had together at Berkeley.  On the day of his death around  1943, he met with Langmuir for lunch and afterward went back to his laboratory, but was discovered dead an hour or so later of cyanide poisoning.

Details of our theses (and masters dissertations) we hold at Imperial are located on the Library’s theses webpages and our earliest digitised thesis comes from 1927 – with a title of “Flow of water in canals fitted with Venturi flumes” by Dr Mohammed Amin.

Read Thesis Thursday from 1920: “He wanted to infuse others with the spirit of research and to disseminate knowledge” in full

In common with a number of other universities in receipt of Research Councils UK (RCUK/UKRI**) funding for open access (Cambridge, UCL, LSHTM), we cannot pay for every single RCUK-funded output to be immediate open access. The Vice Provost’s Advisory Group for Research have therefore decided to restrict the use of the RCUK grant to only pay where:

Rather than paying for open access, if you are in receipt of funding from the UK research councils, you can comply by simply self-archiving (a REF2021 requirement already). Provided that the publisher’s required embargo does not exceed the maximum permitted. The vast majority of publications are compliant via the self-archiving open access route and authors can check individual embargo periods of journals via Sherpa Romeo.

It is important to note that the choice of publication venue will not be compromised as we will pay when they exceed the permitted embargo. Funder compliance and REF2021 output eligibility will also be ensured.

**UKRI: UK Research and Innovation brings together the UK Research Councils, Innovate UK and Research England into a single organisation. 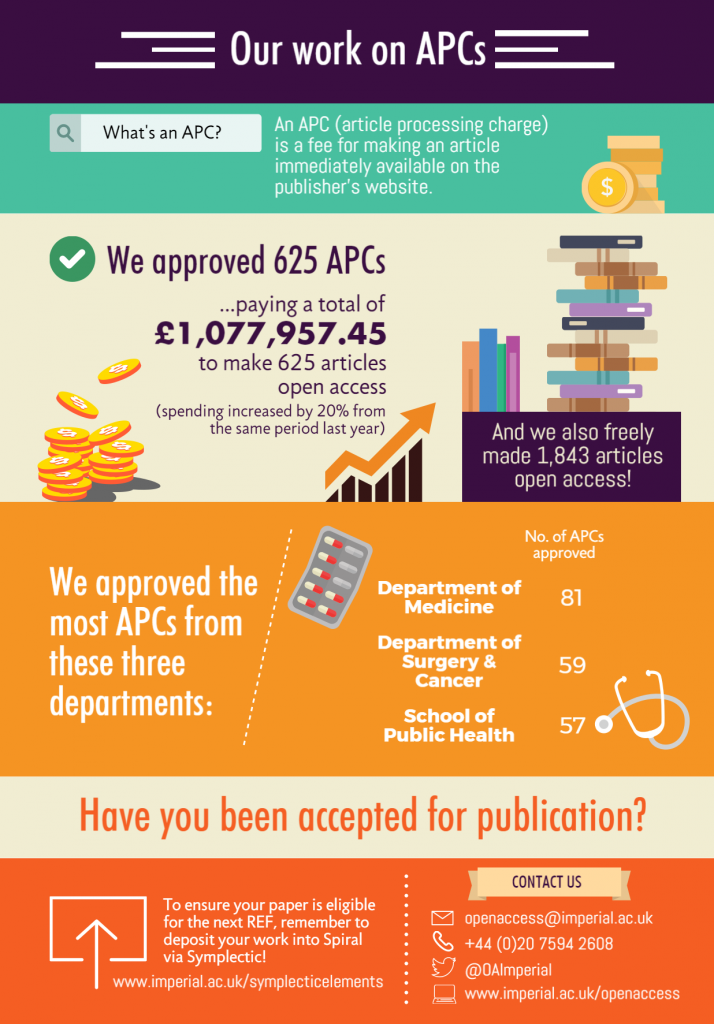 Top 5 most downloaded articles on Spiral -January to June 2017 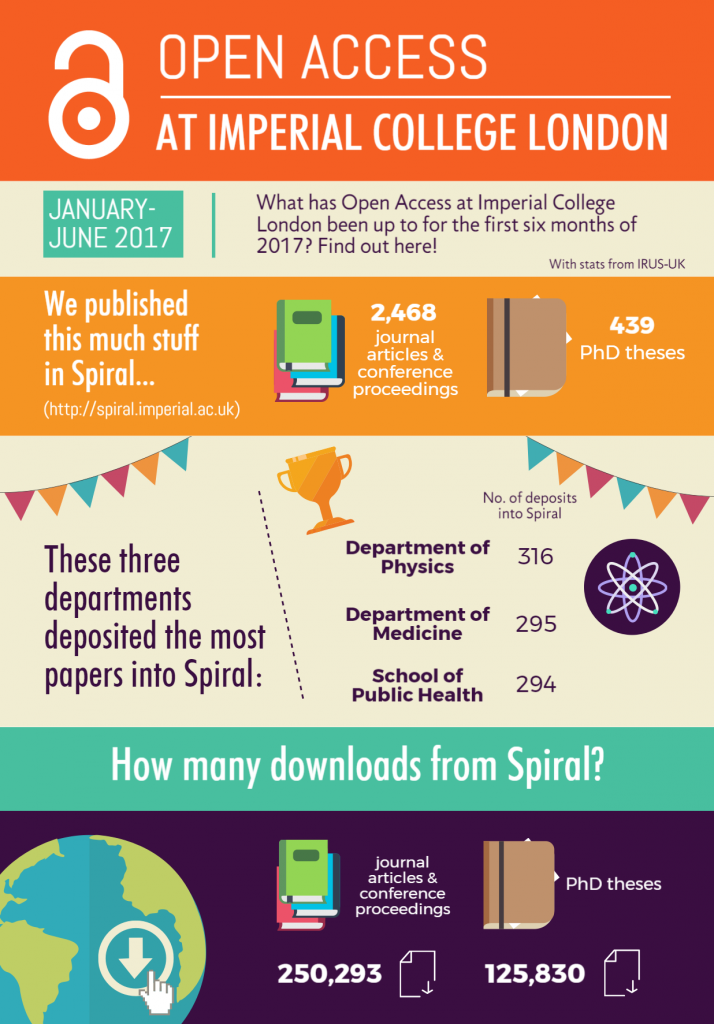