It is time for another round-up of news relating to open access and scholarly communication – here is a summary of interesting things that caught my eye during the past few weeks. I would like to highlight one of the miscellaneous items: analysing its publications, Chalmers University found that the open access articles deposited in the institutional repository have a 22% higher field normalized citation rate than the non-OA articles. So if you would like your citation rates to have a similar increase, why not deposit in Spiral, Imperial’s repository?

David Willetts has been replaced by Greg Clarke as minister for universities and science. Whether this will have an impact on the government’s OA policies remains to be seen, but Willetts has been an active supporter of open access.

Harvard was one of the earliest universities adopting an open access policy where academics grant the university a non-exclusive licence to distribute publications – this allows deposit in the institutional repository regardless of publishers’ OA policies. Other American universities have implemented similar policies – CalTech recently made such an announcement – and we now also see universities outside of the US following Harvard as KAUST has now adopted a similar OA policy.

Research Fortnight published a summary of FOI requests on RCUK open access compliance. “The average rate across the 27 universities that responded was 49 per cent, just above RCUK’s target. However, at least 11 universities have not hit the target—and the real number may well be higher, given that 57 universities did not respond.” Regarding publishers actually delivering OA, Research Fortnight conclude that “on average, 8 per cent of articles that should have been made open access had not been, and that 12 per cent carried no clear indication of their open-access or publishing-licence status.” As RCUK have now made the details of their review public, we are in the process of bringing together the relevant data at Imperial College; a challenge is to identify which of the roughly 10K articles annually published by our academics fall under the RCUK policy, and also the articles where the authors have paid for open access from their own budgets or gone down the green route in an external repository without alerting the College.

Wiley Exchanges published an interview with Mark Thorley, who coordinates OA and RDM for RCUK. He is overall positive about progress and defends gold OA, but he is also concerned about fluctuating embargos and some universities “acting in an ‘anti-Gold’ OA manner”. He commends UCL on launching a new OA university press. It is interesting to compare his comments with those of the Wellcome Trust’s Robert Kiley who at a recent Jisc-CNI event was very critical of hybrid journals and publishers progress in switching to OA publishing.

A study on Evaluating big deal journal bundles finds that journal pricing is not necessarily related to size or research outputs of the subscribing universities. It also concludes that academia is receiving significantly less value from commercial publishers than from non-profits: “Among the commercial publishers in our study, Elsevier’s prices per citation are nearly 3 times those charged by the nonprofits, whereas Emerald, Sage, and Taylor & Francis have prices per citation that are roughly 10 times those of the nonprofits.” The study has been picked up by media, including the Guardian.

Notes of the RCUK International Meeting on Open Access (20th March 2014) have been made public. They contain some interesting information. For example, the Wellcome Trust has imposed sanctions in respect to its OA policy 62 times in the last twelve months (none at Imperial College), and the overall compliance rate is now 66%. Cameron Neylon estimates that gold OA is now 20-25% of the global market. The paper has a useful summary of global OA activities, by country.

Stuart Lawson suggests that the Finch Report may have missed evidence when it estimated the average price of APCs. According to his article, a comprehensive study that had not been acknowledged in the report set the average APC at about 1/3 of the price eventually published by Finch. As the current APCs from hybrid journals fall into the much higher bracket given by Finch, Lawson speculates that the Finch estimate may have become a “self-fulfilling prophecy”.

A lecturer in New Zealand has taken inspiration from Tim Gowers and has sent FOI requests about subscription payments to NZ universities.

UC Davis have set out a plan for a Mellon-funded project to investigate the institutional costs of gold open access, partnering with North American universities including Harvard. We are doing something similar, but on a smaller scale, as part of the OA project.

A Swedish study shows that OA articles deposited in the repository of the Chalmers University of Technology have a 22% higher field normalized citation rate than the non-OA articles.

Taylor & Francis apologised for interfering with and delaying the publication of an article that criticised the profits of major academic publishers. The apology followed from the editorial board considering resignation over what could be perceived as censorship.

An analysis of data from the Directory of Open Access Journals (DOAJ) shows that the US has the highest number of OA journals, followed by Brazil and the UK. The UK is the country with the second highest percentage of OA journals that charge a fee – about 64%, compared to Germany’s 30% and Egypt’s 87%. Egypt ranking highly is probably due to the OA publisher Hindawi being based in Cairo, whereas the high percentage of OA journals that charge authors a fee in the UK may be due to funders’ focus on paid-for OA.

The Research Council of Norway is making available money to cover 50% of open access publishing costs in a new, five year funding scheme.

“A Subversive Proposal”, a message sent by Stevan Harnad encouraging academics to make their publications freely available online, has just had its 20th anniversary. It is generally seen as one of the founding documents of the OA movement. Being asked what he would change if he were to write it today, Harnad responded: “Knowing now, in 2014, that researchers won’t do it of their own accord, I would have addressed the proposal instead to their institutions and funders.” 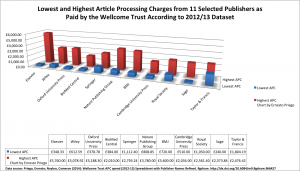