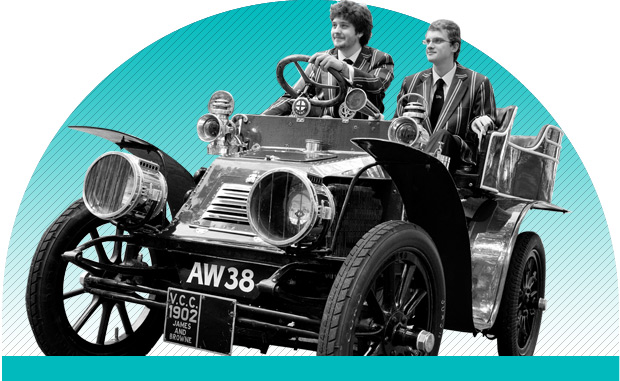 Don’t be fooled by this old timer: this 1902 James and Browne town car enjoys more hands on his body than cars half his age.

Bo’ (number plate AW 38) is the only known remaining 1902 James and Browne automobile produced in London from 1898 to 1910. Bo’ is highly unusual in a number of ways, including engine layout with the flywheel between the cylinders… and the fact that two people drive him! He is maintained entirely by volunteer students of the City and Guilds College Motor Club.

Bo’s name is taken from the Bible (Mark 3:17) and means ‘Son of Thunder’ or ‘Son of Fire’… appropriately named given the loud engine noise and bolting horses problems it caused when driven around London at the turn of the last century.

Early life was good to Boanerges. He took part in many ‘Brighton runs’ during the early 1920s, until it was determined that he was too new to participate and banned. The London to Brighton event, sponsored by the Veteran Car Club of Great Britain, is open to all motor vehicles (three wheels or more) built before January 1905.

Then came the ‘Biscuit Incident’ on 30 October 1924. Ramsay MacDonald was Prime Minister and the Rover was beyond repair. Bo’ was driven to Downing Street, emptied of petrol, and his gearboxes filled with gravel. A well-dressed, life size effigy with a biscuit in his hand was left in the passenger seat. This was a protest against the recent knighthood of a leading biscuit manufacturer chairman, or perhaps the fact Ramsay MacDonald had conveniently received a Rolls-Royce as a gift from the newly knighted biscuit company chairman, Lord MacFarlane. Apparently, the police had considerable difficulty moving the car. There is no proof but it is suspected that Guilds students knew they had proved their point and celebrated over several pints.

Onward to a new Bo’. Two students, John Garland and Dick Riddle, bought the present Bo’ from Lilleshall in Shropshire for the princely sum of £40 and towed it back to London. The car was christened Boanerges Mk II on 26 November 1925 — with a bottle of beer. Being seven years older, the new Bo’ could again participate in the London-Brighton runs and, even better, he could reach greater speed: 23 mph.

It should be noted that the first Bo’, ‘old Bo’’, was eventually towed away from Downing Street. (No record remains of the Prime Minister’s shouts of abuse). Old Bo’ was purchased by (presumed) student Peter Maxwell in 1936. Old Bo’ was garaged at the Crystal Palace race track and used as a track marshal’s car in 1939–40 until the army requisitioned the track. With no other garaging available and his owner at war, Bo’ found himself flying the skies – through the Ministry of Aircraft Production’s scrap collection programme.

A mysterious letter delivered to ‘X’ occurred on 9 July 2002. You see, to celebrate his 100th birthday Boanerges celebrated by being driven along the back roads of France from Boulogne to Paris. He made it to Paris in six days thanks in part to a back-up team needed to rebuild the engine. A letter from the Rector, Sir Richard Sykes, was delivered conveying greetings to ‘X… a.k.a. École Polytechnique. The letter is said to have conveyed polite greetings… but who can say with certainty?

Although Bo can now be driven by only one person, the tradition of a co-driver is unlikely to disappear. Each year Bo’s new driver is chosen by the previous year’s driver. Bo’s driver is in control of the steering, brakes and gear changes, and the co-driver controls the throttle and ignition.

Bo’ is said to be one of only two James and Browne automobiles left in the world — the other being the newer 1904 model.

Is Bo’ more popular than other other Imperial mascots? Share your comments below.
[fb_button]