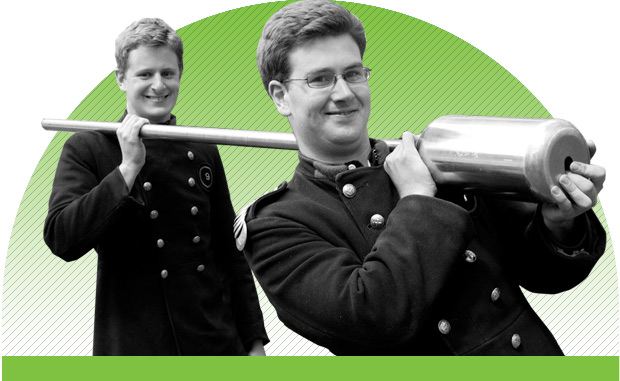 On the cold, dark night of 30 October 1958, Theta I appeared in a bath of flames on Imperial Institute Road… This proved a rather dramatic entrance for Theta I, born on 20 February, because she was then just a ballcock screwed on a four-foot-long broomstick and painted in RCS colours. Why a thermometer? Every student, save for the oddball mathematician, uses a thermometer at some point during their studies here. Theta I was christened at the Fresher’s Dinner that October night, where the following verse was recited:

“Freshers, into your guiltless hands we fling
Defence of this Thermometer, a thing
Handed down by generations, we recall
‘Twas made last year out of a cistern ball.”

It should be noted that Theta I was far more interesting than the drum previously used to announce RCS’s presence at RAG events, barnights, and Morphy Day. (No, the drum you see in the office is not the original. That was nicked from Southampton much later on.)

November 1958 – ‘doh! Theta I was lost at Morphy Day that year. She was regained about two weeks later from the middle of the Round Pond in Kensington Gardens, where Guilds had floated her. (No word if this tomfoolery was amid tomato and flour fights.) Theta suffered many violations her first six years during the turbulent 1950s and 60s.

1991 – Bearer Steve Dorman was hit by a van defending Theta during a scuffle with C&GCU raiders outside the Royal Albert Hall. Dorman suffered a broken leg. (Note to Steve Dorman: Theta wonders if you’ve forgiven her? Please write.) This incident changed a few rules at Imperial so that mascotry could be pursued without actual bloodspill.

Theta Mk II was never recovered, and rumours of her eventual location ran from Euston left luggage office to a hotel in Belgium — indicating to Scotland Yard investigators a welcome attitude toward baggage (emotional and otherwise), and taste for waffles.

If Theta is violated, the RCSU’s committee must throw her into the Round Pond in Kensington Gardens on her return, and commission a new Theta. Each version is a ‘virgin’.

RCS was without a mascot for the longest period ever — from mid-October 1969 to 10 October 1970 when Theta MK III began to take shape. Prior to Steve Dorman’s valiant attempt to protect her in 1991, Theta had not been violated since 1973.

Is Theta more popular than other other Imperial mascots? Share your comments below.
[fb_button]