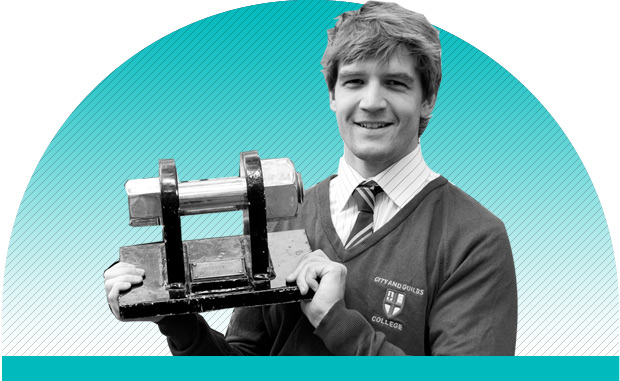 Bolt is a 68lb wheel nut said to fit his best friend, the CGCU mascot Spanner. They literally fit together.

Bolt is a steel shackle with a chrome bolt passing through him, mounted on concrete, and is about a foot long. He was manufactured in 1968 and weighs 68lbs.

Step up and into the spotlight, lads.

Bolt and his ever present pal, Spanner, were purposely constructed to be heavy to deter others from capturing them and holding the mascots ransom. While a lighter Spanner (Wooden Spanner) was eventually made to accommodate College functions, Bolt remains steadfastly heavy.

Bolt was the central focus by “certain vigilante/illegal organisations such as the ‘Black Hole’ and ‘Trojan Horse'”, according to Council documents unearthed from 2005. These groups carried Bolt into controversy when they took part in mascotry without mascots of their own, thereby breaking the rules of mascotry.

All was resolved by calm, diplomatic negotiations between CGCU and RSM until…

This is highly unusual because, obviously, he isn’t so mobile. It was later learned that Bolt and Spanner were kidnapped and held for ransom. The anonymous ransom note was sent by email:

“As we told you some time ago, the mascots are safe,” said the correspondence sent to Live! It continued: “they are in trusted hands”.

Those holding Spanner and Bolt assured Live! that the two antique mascots would be returned to the CGCU at the Freshers’ Bar Night at Archangel, on Kensington High Street on 15 October.

However, this left Guilds without their mascots during Freshers Week, a vital time for the Faculty of Engineering union to attract the attention of the new intake of Imperial engineers.

The move raised eyebrows because a ransom note had not been sent earlier, leading some to wonder if Bolt had been carted off for good.

Bolt is heavy but violate, which means crafty, muscular teams might be able to steal him for ransom…

Spanner and Bolt were kidnapped and returned in 2009.

Bolt continues to be a pawn in upstart student organisations eager to participate in mascotry.

Trojan Horse Society, a.k.a. the Wooden Horse Organisation, is the team of Guildsmen which recovers the mascots when they are stolen, and attempts to liberate other mascots. Members were once considered outsiders but are now an accepted part of the game to raise funds for charity.

Spanner and Bolt bearers are usually elected at the end of the academic year. This gives mascot bearers the entire year to build upper-body strength suitable for hoisting Bolt overhead.

Why does Bolt rally the attention of vigilante mascotry groups? Share your comments below.
[fb_button]