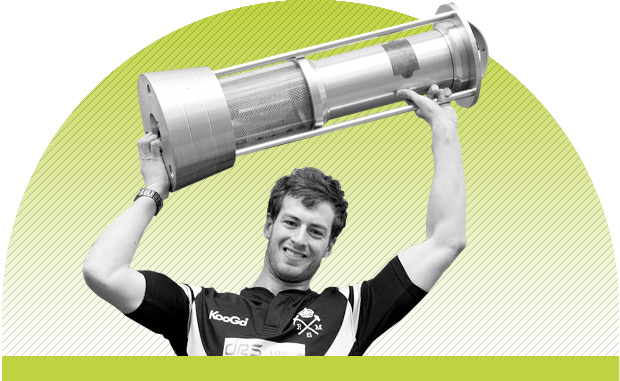 Davy II (1975) is a three-foot high, 132lb (60kg) brass and aluminium mining lamp. Similar lamps were once used in mines to detect dangerous gases because the flame does not burn without oxygen. 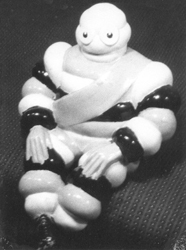 The first mascot was a Michelin man acquired in February 1958 under sub-committee chairman Alan Lewis. The exact acquisition is largely unknown except that it was “purloined by a free spirit from its former place of honour atop the cab of a lorry dedicated to serving Michelin customers.”

The individual hoops of Michelin man’s jovial body were subsequently painted alternately in the white, yellow and black colours of the RSM and presented to committee.

This meeting was unique in the history of the Mines Union in that the President of Bedford College, Miss Marilyn Farr, the Vice-President, and sundry other members of this illustrious college were present. After making a short speech, addressing the meeting by “Mr President, Gentlemen and Lover Boy in the corner…’ Miss Farr christened Mitch, as the mascot is to be called, by pouring a pint of bitter over his head.

Yep. ‘Lover Boy’ Mitch. The next day happened to be St Valentine’s Day and Mitch was presented with his first valentine, and with his first birthday present. Some Miners are still mystified by the significance, or otherwise, of the cabbage, brush, and lemon presented.

Mitch’s name was appropriate to his origin but also relevant to the good name of the Dean of the RSM and Professor of Mining, Professor J.C. Micheson. The Professor, also known informally as Mitch, was a consummate gentleman with a highly ascetic disposition, and was (not unjustifiably as a result) spoken of as ‘the orange juice Dean’.

Mitch rode with RSM on the original Clementine, a traction engine, for several years.

In 1965 Royal School of Mines voted to discard Mitch because he had little popular appeal, and worse, a Michelin Man was also the mascot of the National College of Rubber Technology [now London Metropolitan Polymer Centre].

Students on committee suggested a sea mine as a replacement – despite great impracticality and safety concerns. The matter went as far as to receive response from First Lord of the Admiralty, stating he had passed the matter to the Chief of Armaments.

An alternative was presented 18 May: an incredibly heavy, three-foot high model of one of the earliest Davy lamps, designed by Fergus Kerr and built by Bert West of the Metallurgy Department. He too was painted black and yellow. Name suggestions were posted to “R. Gash via the letter racks; a small reward is offered”.

The student who named Davy is lost to the sands of time. Will an alumnus from this time period  come forward with evidence of who named Davy?

No sooner had Davy been birthed and named than he was stolen in 1965. “We also stole RSM’s Davey lamp and filled it with cement and epoxied all the connections before we returned it,” admitted Ralph Cornforth (Physics 1965).

Fights to capture and retrieve Davy are legendary. One disruptive battle lasted uninterrupted for hours prior to the anticipated campus visit of Viscount Falmouth. There was so much mess that Mines had to hire an emergency crew to work the night to be presentable the next day.

In one episode of Davy-chasing,

“Two RCS men spent 18 months tracking down where he was stored in RSM by hiding in cupboards after RSM UGMs and listening out for the Davey Bearers going by.

Eventually they narrowed down the location of the mascot to one particular storeroom in the basement and hid behind a filing cabinet just outside as Davey was put away. Later that night they returned with hacksaws, hammers, drills and boltcutters, picked the lock to the room and demolished the only cupboard therein which was Davey’s hideyhole.”

A second Davy was built of anodised aluminium and brass to be lighter weight and more decorative. He is referred to as MkII, New Davy and, frequently, Shiny Davy. Initially, RSM used Old Davy as a decoy to deceive potential thieves by carrying both into and out in bin liners.

But, the plan backfired.

In the mid-eighties Old Davy went missing from the Mines office where it had been used as a doorstop. Old Davy was briefly recovered in the Physics level 1 common room behind a wood panel, but disappeared and has never been seen since.

It is believed that Old Davy may have been in the room of another Imperial student at the end of an academic year. RSM has voiced fears that the 60kg mascot may have been thrown away by cleaners during the end-of-year rush to get Imperial’s halls of residence ready for summer visitors.

No other mascot has been referred to as ‘Lover Boy’ on record.

Is it true that if you rub Davy a genie appears? Comment here.
[fb_button]